A quiet day on site

Next day was a Saturday and the forecast was for sun all day, praise be, so before breakfast I went to the laundry room and put a wash on.  Hopefully I won’t have to do another one before we go home!  We’d brought as much as we could in the way of clothes, towels and bedding, but there’s a limit to how much weight you can carry, so on a three-week trip it’s almost inevitable there’ll be a time when you have to use a washing machine.  The day was mostly sunny, although not as hot as when we first arrived, so we sat outside the caravan and relaxed.  Unfortunately a large French family arrived with two vans and one camper van and set up camp on an adjacent pitch, spreading out in front of the pitch so it was a tight squeeze for anyone to drive past them.  They played endless ball games – football, rugby, tennis, in fact anything involving a ball or frisbee of any size or shape.  Luckily they all went to the swimming pool in the afternoon so we had some peace!

In the evening John cooked chicken on the Cadac and we watched rock-climbers on the cliff face opposite as we drank a glass or two of wine.  The wine was called Chateau de Planques, pronounced “plonk”, but tasted a lot better than it sounded!  Later, two hot air balloons floated overhead, but both had trouble maintaining height – one came so low we thought it was going to land in the camp site! 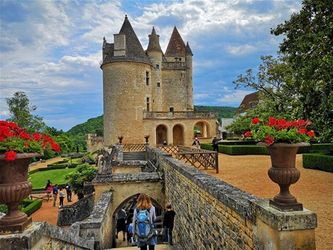 Sunday was cloudy with a bit of rain but we decided to go out anyway, to Chateau Milandes not far from Castelnaud.  It’s a lovely Renaissance chateau, but the main attraction is the personality of its owner from 1947 to 1968, the extraordinary Josephine Baker.  Born poor and black in the USA, her talent for singing and dancing (of the exotic variety) made her the star of the Folies Bergere in Paris. She had numerous famous lovers, several husbands, was a heroine of the French Resistance, became involved in the civil rights movement in America, and adopted a “rainbow tribe” of 12 children from different ethnic and religious backgrounds.  It didn’t end well – she got into financial difficulties and was evicted from the chateau.  She died in 1975 and was given a grand state funeral. 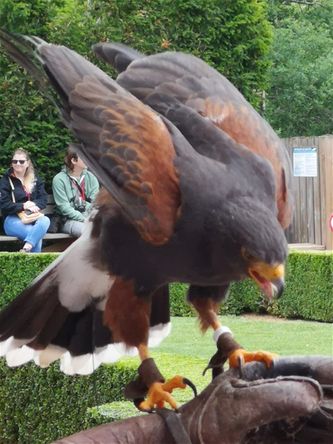 We had seen a sign for falconry displays in the gardens, no doubt provided to keep children entertained.  One was due to start just as we arrived so we decided we might as well watch, as the weather was dry for the moment.The performance was much better than I expected.  As well as various hawks and eagles there were several owls, and their keeper demonstrated their speed and accuracy at catching prey.  There are large aviaries of all kinds of birds in the grounds, and at certain times children can feed and interact with them.

Unfortunately it started drizzling so we took refuge inside the chateau, which was full of memorabilia from Josephine Baker’s career. As well as posters and photographs there were some of her fabulous stage costumes, including her daring banana skirt, recently revived by Jean Paul Gauthier, and a room dedicated to her wartime career in the Resistance.  The Art Deco bathrooms she installed had decors inspired by her favourite perfumes, Dior and Arpeges, but the large kitchen was very much a cosy family room where her entire adopted family could sit round the big farmhouse table for meals together.  As the guide book said, she was one of the most remarkable women of the twentieth century. (picture from Pinterest) 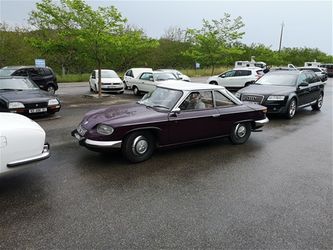 When we returned to the car park we saw it had been taken over by the Tarn Retro Auto Club – all sorts of interesting old French cars! By now the rain had really set in so we drove back and had a quiet afternoon reading yesterday’s Telegraph – not our paper of choice, but all they ever seem to sell abroad is the Mail and the Telegraph!

The weather wasn’t showing any signs of improving in the near future.  Usually, if you’re in a caravan or motorhome, you can simply move elsewhere in search of sunshine. We spent the next day lookingat our options and scrutinising several weather forecasts.It seemed the weather outlook was poor all over France.  There’s usually somewhere dry and bright, but the whole country seemed to be blanketed in rain and cloud for the foreseeable future.  We considered moving elsewhere, not for better weather, but perhaps to a city where there would be more to do on rainy days.  Our camp site, and the surrounding area, was very much geared to warm weather activities. The toilet facilities were also less than ideal – loos without seats are really not comfortable!!  But if we left,we would have to take the awning down, and it would be wet – not ideal for packing up, because of the risk of mildew. We decided to wait one more day then head to Clermont Ferrand. 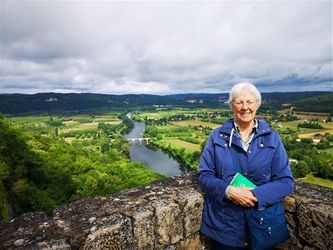 Despite the rain, we went out next day to Domme, yet another of the 100 Prettiest Villages.  This one is a “bastide”, or fortified village, protected first by its position, high on an escarpment overlooking the Dordogne, and second by its thirteenth-century walls and gateways.  The rain had almost stopped by the time we arrived, and there was the occasional gleam of sun through the grey clouds. One advantage of the poor weather was that the town, normally a tourist magnet, was almost deserted. We explored the cobbled streets, ending up at the Esplanade du Belvedere, with fantastic views over a wide stretch of countryside.  There was a large café, again all geared up to open air dining – there were almost no tables at all inside,although the outside ones had umbrellas which provided partial shelter, although dripping, draughty and far from warm. 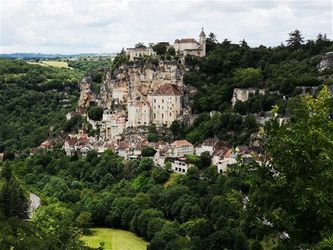 As we made our way back to the car the rain came down heavily again.  Undaunted, we decided to drive to Rocamadour, a rather long, winding journey.  It’s in a spectacular setting, the ancient buildingsrising up a cliff face in the gorge of the River Alzou, and has been the destination of pilgrims for centuries, drawn by the miracle-working statue of the Black Madonna.  In need of lunch, we stopped at L’Hospitalet on the top of the cliff a short way east of Rocamadour, where you get the best views of the town.

Again, the restaurant had a huge, wet, open air terrace, to take advantage of the views, but at least there was a small draughty marquee providing shelter, if not warmth, and a reasonable lunch. 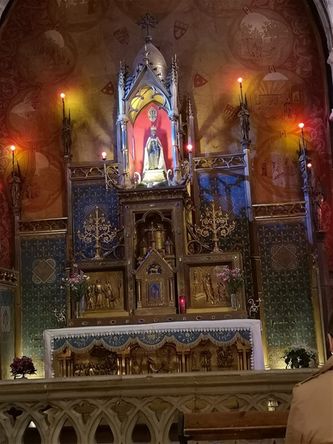 Then we drove down to the foot of the cliff and found a free car park, a pleasant surprise, but one that won’t be there for long – they were in the process of installing barriers and payment machines.Another pleasant surprise was that the rain had stopped and the sun was trying to come out.  A short walk took us to the terminusof the road train which trundled up to the medieval town, where we took the lift up to the castle at the very top.  From there we walked slowly back down, enjoying the views on the way. First came the turrets and spires of the Cite Religieuse, where the Chapelle Notre Dame houses the small wooden statue of the Black Madonna (black from age, and centuries of exposure to the smoke of countless candles.) Embedded in the rock wall above the chapel is the remains of a rusty sword, supposedly the mighty Durandal, which belonged to Roland the brave knight of Charlemagne.  We had seen Roland’s tomb at Roncesvalles/Roncevaux on the French-Spanish border during a previous caravan trip, but how the sword found its way to Rocamadour is a mystery. 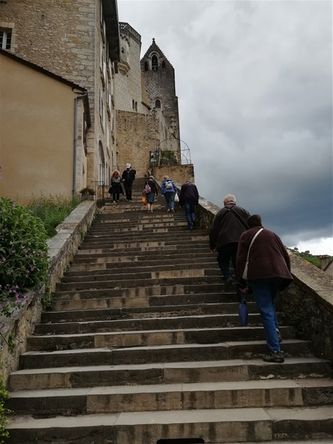 From the chapel we walked down the Grand Escalier to the old town.  Traditionally pilgrims climbed up this worn stone staircase on their knees, and some still do, as Rocamadour is a stop on one of the French branches of the Route of St James, on the way to Compostela.  We made our way along the narrow, crowded main street, lined with souvenir shops, stopping for a delicious ice cream before getting the road train back down to the car park.

The rain held off during our drive back to the camp sitebut started again as we arrived.  Luckily it wasn’t too heavy, and we were able to take the awning down.  It wasn’t completely dry, but probably never would be, so we took our chance and got it done.  Hopefully we can move on tomorrow.