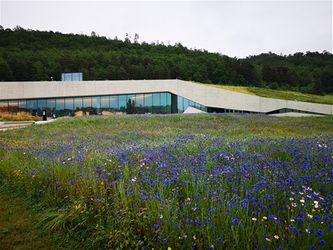 Next morning it was still raining, and the temperature had plummeted from 30 degrees to 13!  Luckily there are lots of caves in the Dordogne in which to take shelter, so we decided it was a good day to visit Lascaux, the most famous of them all.  This cave system, with its spectacular 17,000-year-old wall paintings, was discovered in 1940 by four teenage boys.  It opened to the public in 1948, and proved immensely popular, with the result that the humidity caused by all the visitors made algae grow on the walls and damage the paintings. The cave had to be closed to the public in 1963.  A replica was created (Lascaux 2) in 1983, but after thirty years of use yet another replica, Lascaux 4, had to be made.  (Lascaux 3 was a touring exhibition.) The new “cave” is state of the art, built well away from the original cave, with ample parking for the thousands of visitors who flock there.  And on a rainy day in June it was particularly busy!

The whole experience is very hi-tech, and includes a museum, 3-D visualisations, films and interactive displays. Everyone is issued with their own tablet, then there is a guided tour of the replica cave, where photography is forbidden. It’s just as damp and dark as the real thing, and the paintings of bulls, deer, bison and horses seem to flicker into life as the guide shines her torch on them – an unforgettable experience.  Emerging from the replica cave you enter a large interpretation room where there are more replicas of the paintings – replicas of replicas, in fact! -  this time fully lit, and you can approach closely and examine them at leisure, and take photos with the tablet which you can then send to your own computer.  It would be possible to spend hours pottering about, visiting the cinema, the theatre, the various displays. By this time we were more than ready for lunch in the very pleasant café, but the one thing the designers hadn’t taken into consideration was bad weather – there were far more tables outside, in the pouring rain, than inside, so the queues were horrendous!

Feeling very hungry, we returned to the car park and set off for Montignac, the nearest village.  It was then that we realised we had completely forgotten to forward the photos we’d taken with the tablets, which of course we’d handed in as we left.  I wonder how many other people do that!!  Luckily we didn’t need to go far to find somewhere to eat, as some enterprising local had set up a large café in what looked like a disused barn, open on one side so rather chilly, but at least covered!  The food was hardly gourmet – variations on burgers and chips, mainly – but it filled us up.

We drove back to the camp site and warmed up with a cuppa.  The awning, having been closed up all day, smelt awful – rather like a cow shed!  In fact it had been several years since we’d last used it, as we have a smaller, inflatable awning for caravanning in the UK, so it had been marinating nicely in its bag in the garage for four years.  No wonder it smelt a bit ripe.  Luckily the pong evaporated gradually over the next few days.

The forecast for the next day wasn’t good, but there was a little bit of blue sky amid all the clouds so we risked going to the hanging gardens of the Chateau de Marquessac, just a couple of miles from the camp site. We were very glad we did, because the sun came out, but it wasn’t too hot for walking (there are six kilometres of paths in the gardens, which are built on top of a ridge overlooking the valley of the Dordogne river.)  The chateau is fairly small and unremarkable, but the gardens are amazing and famous for their unusual cloud topiary.  We spent a couple of hours following various paths and enjoying the spectacular views, then retired to the terrace of the “tea room” for a coffee and a walnut tart, while we watched several peacocks strutting about. We thoroughly enjoyed our visit, and noticed that there were plenty of interesting things to keep children entertained as well – now that we’re grandparents we notice things like that!

We needed another trip to Leclerc, so decided to have lunch in Sarlat again.  We found another very reasonable restaurant on the main (pedestrianised) shopping street and ate outside, as the sun was still shining.  John had a salad of gesiers (goose gizzards!) followed by confit duck, and I had pate de foie de canard then a proper coq au vin, made with a very gamy old bird – none of your flabby, tasteless English chickens!  With a glass of wine it came to €15 each.  After going to the supermarket we went back “home” and sat outside for a while, then had a nap.

But life isn’t all fun – I had to deal with the continuing ant invasion in the caravan, and John had to clean out the rather smelly locker containing the toilet cassette which had developed a small leak.  For supper we had a very French snack of bread and cheese.  The Dordogne specialises in small, round, soft goat’s milk cheeses called “crottins”, which come in varying strengths – the one I had, from Rocamadour, was just about as strong as I could stand (John doesn’t like goats cheese at all, and had something equally stinky, but made of cows’ milk.) 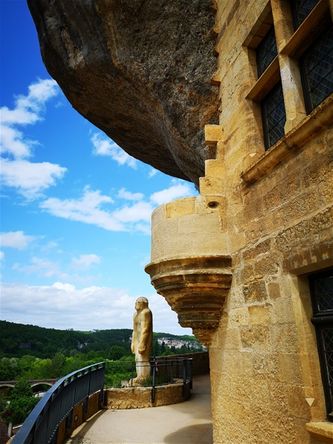 We woke next morning to rain again, so it was time for more caves and prehistory.  We went to Les Eyzies, home to the National Museum of Prehistory.  We found a free car park down by the river, which was a bonus! Les Eyzies is in the valley of the Vezere, which to my mind isn’t as pretty as the Dordogne valley, but has the lion’s share of caves, rock shelters and other prehistoric sites in the limestone cliffs that overhang the river.

The museum was another place we’d visited with the children back in 1984, also on a rainy day. (We don’t have much luck with weather!)  The enormous, ape-like statue of a Neanderthal still stands outside the museum, but the interior has been transformed.  In the last thirty-odd years historians and archaeologists have discovered that Neanderthal man wasn’t the brutish cave-man of popular myth, and it turns out we all have about 4% of Neanderthal genes!  The museum concentrates on mapping the history of tool-making, from the earliest times (an astonishing two million years ago) to the later Palaeolithic period, a mere ten thousand years ago.  There are probably more stone axes and knives gathered together here than anywhere else in the world, along with a number of bones, carved stones, and reconstructions of what our early ancestors looked like.  There are lots of interesting videos demonstrating how to make an axe or a spear from flint. The only criticism I have is that there wasn’t much in the way of English translation – our French isn’t too bad, but the technical terms used in the short films was beyond us.  There were only a handful of visitors – a shame, but maybe a reflection of the rather academic information on display.  Well worth visiting despite that, and a fantastic modern building, but a café would be a useful addition!  We exited onto the wet and windswept terrace built under the jutting overhang of the cliff, where all those years ago we took photos of the children standing in the “cave man’s bath”.

We walked along the rather wet and deserted main street in search of lunch.  We chose La Brasserie Silex (the word for flint!) because the very friendly owner saw us looking at the menu and explained what was on offer.  We had a delicious “tartine”, a sort of large bruschetta or open sandwich, grilled and served with chips and salad.  There were various flavours but we chose the “Perigord” one – goose gizzards again, delicious! 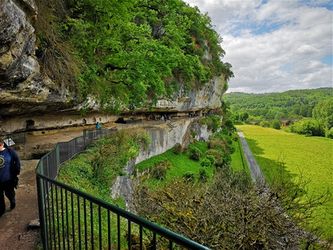 Back at the car we debated where to go next.  The weather was still damp and windy, so we decided on La Roque St Christophe, amazing rock shelters on five levels in the side of the cliffs overlooking the river, which had been inhabited from the earliest times right up until the sixteenth century.  The settlement reached its peak in the Middle Ages when it was the size of a small town.  The rock ledges, deeply indented into the cliff face, were sheltered from the wind and rain, and it was fascinating to see the ingenuity with which the inhabitants had constructed houses, stables, workshops, a prison, abattoir and church high up in the cliff-side.  There were reconstructions of some of the ingenious wooden machines they used for raising supplies from ground level, and for defending themselves in times of war. 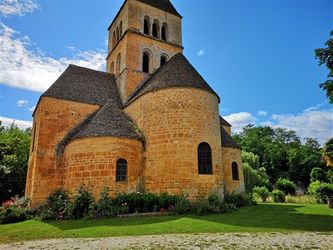 The sun came out briefly, so we drove to St Leon de Vezere, yet another of the 100 Prettiest Villages of France.  There was a lovely Romanesque church, and the whole village was remarkably quiet and un-commercialised.  Then it started raining again, so we headed back.  Despite the poor weather it had been an interesting day.