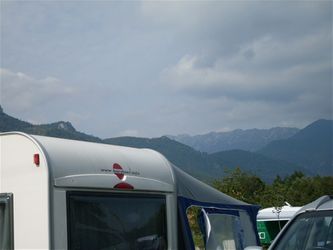 Don't be put off by the name - this is a very pleasant little site, approached by a rather narrow lane which could be tricky for large outfits. It's grassy, level, with numbered pitches, and has views of the surrounding mountains. It has a rustic feel - haystacks dotted about, and the odd cow! The manager, Tony, is very friendly and helpful. There is no cafe as such but there is a large covered area with tables and vending machines. Internet is available in reception. The toilet block is gradually being renovated, and while not up to French or German standards, it's perfectly acceptable, clean and with plenty of hot water. There are the usual washing-up sinks and a washing machine which costs 4 lei.There's a good supermarket nearby and it's a short walk into Bran where the main attraction is Dracula's castle! There are a lot of tacky souvenir stalls, but also an interesting, and free, village museum with a collection of old cottages furnished in traditional style. A short drive away is the old town of Brasov, with Baroque houses, an attractive central square and the fascinating Black Church. It's worth taking the teleferique up to the top of the hill overlooking the town for spectacular views. Another useful feature of Brasov is a large Carrefour supermarket.

not a photo of the campsite, but us parked opposite the Peoples' Palace

Having read a very off-putting review of this site we were quite apprehensive about staying here. However, it was only for one night, on our way to Bulgaria, and there is simply no other campsite anywhere near. We had difficulty finding the site and had to ask a policeman, but as he spoke no English this didn't help! We knew roughly the area it was in and eventually spotted it by accident. The reception office was smart enough and the young man behind the counter spoke English and was helpful.The layout of the site is bizarre, in that it consists almost entirely of small cabins backed by trees. There is room for tents under the trees but no possible access for caravans or motorhomes, which have to park on the tarmac area in front of the cabins. There are electric hookups outside the cabins, and the toilet block and washing-up facilities are clean, if not particularly smart.Elsewhere it is not recommended leaving one's outfit there to go into town, and also mentions problems with noisy youths roaming the site at night, so we were a bit nervous, but the night passed without incident. There was a little noise from youths but nothing too bad. The worst noise came from the constantly barking dogs, but this is a problem all over Romania - there are thousands of strays, and dead dogs at the roadside are a common sight.Next morning we asked the helpful chap in reception to suggest a route out of Bucharest, avoiding the city centre. Surprisingly, he told us that as it was a Sunday there would be little traffic, and we could drive right through the centre with ease. He was right, we had no problems at all and were even able to park outside the amazing People's Palace to take photos. We realised how lucky we'd been later when talking to other people who had made the same journey on a week day - they had such problems finding their way that they had to pay a taxi driver to lead them through the city 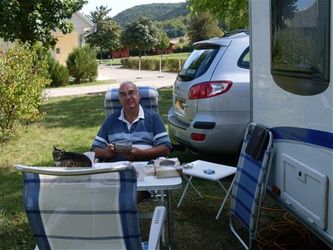 Romania can be quite a culture shock, so it was a relief to find this excellent campsite, which is Dutch-owned but run by local people. The pitches are level, grassy and unmarked. There are also a few wooden cabins for rent. The toilet block is very good, with modern, clean facilities, and there is a good washing-up and laundry area. The site has a restaurant and bar which are good value. We were the only diners there but but the service and food were excellent. There is a small lake on site with a sandy beach but the water was very weedy so we didn't fancy swimming. However there was a lot of fascinating wildlife in and around the lake, including kingfishers and hundreds of frogs! The surrounding countryside is pleasant rolling hills, and in high season there are organised walks. As the site is just off a main road there is some traffic noise