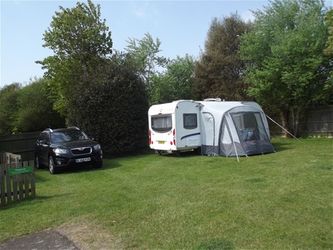 It was quite a short journey to our next stop, White House Beach at Kessingland, four miles south of Lowestoft.  The coast here consists of long, shingle, wind-swept beaches backed by low, crumbling cliffs with a major erosion problem. Houses and even whole villages are sometimes washed away.  Luckily Kessingland seems solid enough!  The site is a little exposed, with not many trees, but we still managed to find a pitch with one blocking our TV satellite reception!  But again we could hear a cuckoo nearby.

The beach at Kessingland 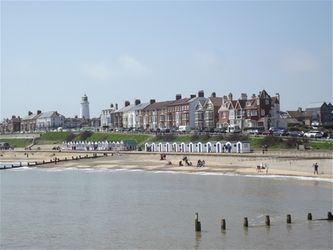 We were looking forward to seeing Southwold, so set off next day.  The sun was shining and the sea front was full of people enjoying the pleasures of the sandy beach, the pier and the colourful beach huts.  After walking the length of the sea front and back again we had lunch in the Nelson pub (guess what I had – crab sandwiches.) After another walk we had a look at the lighthouse.  John felt the stairs would be too much for him, so he found another pub, while I toiled my way to the top, for fantastic views.  There was a guide to explain the history and point out various landmarks.  Then I met up with John again and we had a look in the church, built in the typical handsome East Anglian style of chequered flints.  Then it was back to the car and “home”.  It was a lovely day – what a difference the sun makes – and a delightful little town. 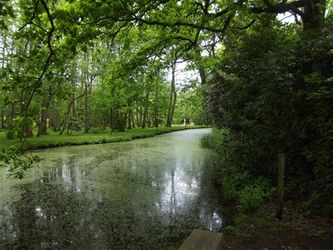 Next day was sunny again, so we set off for Fairhaven Water Gardens, at South Walsham, an ancient woodland garden in the heart of the Broads. We had a leisurely stroll through the gardens, past ancient oaks (two of them, known as the King and Queen, are more than 900 years old) and beside shallow waterways, admiring banks of candelabra primulas.  The path eventually came out beside a Broad where we saw herons, grebes and a tern.  Then we made our way back to the café for lunch sitting in the sun. A very enjoyable morning.  On our way back to Kessingland we visited Burgh Castle, a third century Roman fort with impressively high walls still intact, and lovely views of the Broads and windmills (known locally as water pumps.)

We had heard another cuckoo at Fairhaven.  I think we’ve heard more cuckoos on this trip than in the rest of our life! Then it was back to the caravan and another quiet evening without TV! 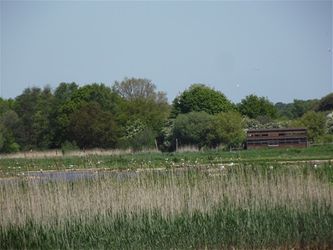 Hallelujah, the sun shone again next day.  We went to Minsmere RSPB reserve, which often features on Springwatch.  After a coffee in the excellent café we walked all round the “scrapes”, shallow lagoons with lots of small sandy islands, and went into all the hides.  There were avocets, oyster catchers, shelducks as well as numerous geese and goslings.  We saw two cranes flying overhead, and a marsh harrier.  Back to the café for lunch, via the sand martins’ cliff.  It was amazing to watch them shoot straight into the numerous small holes in the rock, never missing their aim.  There were lots of big dragonflies too, including one we’d never seen before, a four-spotted catcher.  And we heard yet another cuckoo!

After lunch we followed another trail to a hide where we’d heard it was sometimes possible to see an elusive bittern – and there it was!  A close encounter with a couple of muntjac on our way back to the car completed a fantastic experience.  Beautiful wild surroundings, warm sun, and the serious twitchers weren’t too obtrusive!  We drove on to Dunwich, the major town and port of East Anglia hundreds of years ago, but lost to the encroaching sea.  All that’s left is a remnant of the Greyfriars’ Priory and a vast, windswept beach.  Finally we couldn’t resist a return to Southwold, where we had a brief, blowy walk along the seafront and a fabulously delicious ice cream at H and J’s.

The next day was our last, rather grey and very windy.  We walked down to Kessingland’s  beach, over a long stretch of hummocky grass and shingle before finally reaching the sand.  The beach stretches for miles, and on a blustery day, with few people about, it was a little bleak.  The only seafront café was closed, so we had a very long walk to the local shops to buy a Guardian and some doughnuts – we needed energy!  After lunch we started packing up and took the awning down, no easy task when it’s blowing a gale.  After a final walk along the promenade we settled down for the evening.

Needless to say it was a glorious sunny day as we set off for home, and reflected on our trip.  The weather was a bit disappointing, and at times it was a bit like “Frank Spencer goes camping”, what with all the disasters, but now we’ve got the hang of it again we’re looking forward to our next caravan adventure, wherever it may be!