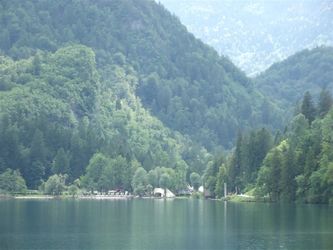 campsite from other end of lake

This site is certainly in a very beautiful place, but doesn't live up to its surroundings. This was our second visit (the first was 4 years ago) and it seems to have gone downhill.As other reviews have said, pitching is haphazard, as pitches are numbered in groups but not marked. This means some units take up more than their fair share leaving others cramped. There were lots of lines of washing strung between the numerous trees, which meant some pitches weren't even accessible. The ground is generally uneven and the grass was long and untidy. Some pitches are a long way from EHUs. We had to borrow an extension from reception, for a 30 euro deposit.On our previous visit we found most pitches were very muddy. Work is currently in progress to improve the drainage in some areas. The toilet blocks are smart and modern but showed signs of lack of maintenance. In the one I used there was a broken-off tap in the ladies and OH said there was a broken shower in his. Cleaning wasn't frequent enough for such a busy site.Each time we used reception there was a long queue because there was only one, rather frazzled person to deal with everything. When we left it took 15 minutes to pay. The impression was of a busy site struggling to cope.The restaurant, however, is excellent, with many Slovenian specialities. We had beef in mushroom sauce with onion dumplings and cranberries - delicious!The town of Bled itself is not particularly attractive, and very busy, with a constant stream of coaches disgorging tourists from all over the world. Luckily the camp site is at the other end of the lake which is much quieter and more attractive.I'd definitely give the beauty of Lake Bled 10 stars, but not the camp site.

This is a large complex, comprising hotel, spa, bungalows of various types, camping area and separate tent field beside the River Sava. The camping area has gravel pitches with neat grass surrounds. The reception staff speak English and are helpful.There is one large sanitary block, rather dated and basic but clean and with plenty of hot water, although the shower cubicles are on the small side. There are all sorts of sporting and recreational facilities, including swimming pools, tennis courts, and even beauty treatments. Campers can use the hotel restaurant.The city centre is 5 km away and there is a bus stop right outside the campsite. It's an attractive and fairly small city with a castle on a hill, plenty of interesting architecture and lively pavement cafes along the river.The site was quite busy even in early May, so will probably be very busy in summer