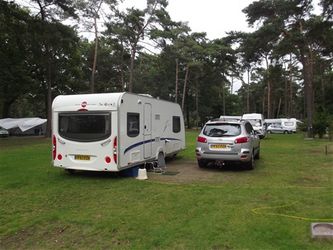 This is a very large, family-orientated site, but it’s spread over 67 hectares of woodland so there is always plenty of green, open space and you never feel overwhelmed by the size.There are various types of accommodation: chalets, bungalows, mobile homes and ready-erected tents; a large area of seasonal caravans; a large area of privately-owned cabins; and several touring areas, all named after different animals and birds. These areas are all very spread out and separated from each other so it doesn’t feel crowded.Touring pitches are numbered but not otherwise marked. They are large, level, on sandy ground, among tall pine trees, but these are not so close together that they block out the sun. They’re well away from the entertainment areas, so nice and quiet.There are plenty of activities for children – several playgrounds, crazy golf, trampolines, tennis courts, organised activities, bikes for hire and an indoor swimming pool. There are three lakes, the largest of which is for swimming, with a beach at the shallow end and a water-slide at the deep end.The second lake is for boating and pedaloes, and the smallest one for fishing. There is a large restaurant beside the swimming lake, a takeaway and a couple of snack bars. There’s also a good-sized supermarket.The sanitary blocks are clean and modern, but functional rather than luxurious. There’s plenty of hot water, a covered washing-up area and a launderette. Reception staff speak English but not all the information leaflets were in English.We just used the site for a couple of nights on our way to Germany, but it would make an excellent base for a family holiday. To be honest there’s not a lot to see in the surrounding area, but if you have children then everything you need is right there on the site! 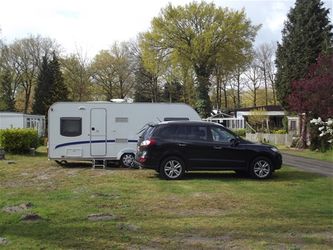 This is a fairly large, rambling camp site, with a lot of permanent caravans, some quite old and shabby. We got the impression that some were being lived in full time. There are signs that the owner is trying to update and improve the site. There are a number of smart new bungalows for rent, and the sanitary block is currently being renovated. Meanwhile there is one toilet and shower in the small laundry room behind reception. Touring pitches are in amongst the permanent caravans and are not marked out or numbered. The ground is fairly level and as the soil is sandy, it drains well.There is a bar/restaurant, a small shop, a swimming pool and children’s activities in high season. The surrounding area is excellent for cycling, rambling, sailing and swimming. There is a large lake nearby with a sandy beach. Buses to the town centre stop just outside the gate. The town - the unpronounceable S’Hertogenbosch – is the birthplace of the painter Hieronymus Bosch, famous for his weird paintings of heaven and hell. Many old buildings have been preserved, and there is an exhibition of his life and work in one of the old churches.Unfortunately we found the site to be shabby and chaotic. It had only recently opened for the season and we got the impression the owner hadn’t really got a grip on things. There was nowhere to get water apart from a sink in the laundry room, and no bins anywhere for disposing rubbish. There was no chemical disposal point except for the motorhome service area which had a broken hosepipe, so it was impossible to rinse out the cassette.It’s a shame it’s so run-down, as it’s in attractive surroundings and with an interesting old town nearby. Perhaps things will improve when the season gets underway. It’s an ACSI site and was only 11 euros a night, but it was barely worth that much. All right as an overnight stop at a pinch, but otherwise not recommended.