Excellent site. Popular winter night halt on way south, but worth staying for a few days. Staff very helpful, pitches spacious, each with its own shower & toilet cabin. The only drawback to the individual shower cabins is that they're not heated in winter! The free wifi is a great bonus.Large enclosed washing-up/laundry room. Washing machines cost 3 euros, which includes the soap powder. Caceres is a wonderful old town, as is Trujillo about 30 minutes drive away. The Monfrague National Park is worth visiting to see the gryffon vultures!There is a large Carrefour supermarket 2 km from site 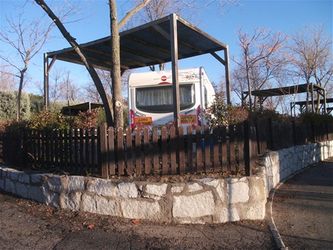 There are a number of sites in the Madrid area but this is the nearest to the city, which can be reached by bus from the site.Reception staff spoke English and were helpful. As you enter the site there are a lot of permanent caravans, which have rather a 'shanty town' appearance, but the touring pitches are in a separate area at the far end of the site.Pitches are level, on sandy/gravelly ground, and of reasonable size. Some are completely sheltered by sunshades, the rest have a small sunshade per pitch to put your table and chairs under. This would be very useful in summer as Madrid gets extremely hot, but in January it was very, very cold!Only one shower block was open low season but it was fully enclosed and heated, which was a boon. It was the smartest and most modern I have ever seen! Only one drawback - too hi-tec. The taps and showers all work by motion sensors, this means if you move in the shower the water stops! I found this so irritating I ended up using the disabled facilities (we were the only touring unit on site so I knew it would cause no inconvenience. ) These were the best I have ever seen, a whole separate bathroom with toilet, 2 washbasins at different heights and a shower with regular taps.The washing-up sinks were also in a fully-enclose room but also had motion-sensitive taps, which meant you had to keep your hand under the tap the whole time you were filling the bowl!There is also a swimming pool, restaurant and laundry room, though we didn't use them. We were only staying a couple of nights while visiting the art galleries in Madrid.They've obviously spent a lot of money on refurbishing the shower blocks, but I think normal taps would be more user-friendly! 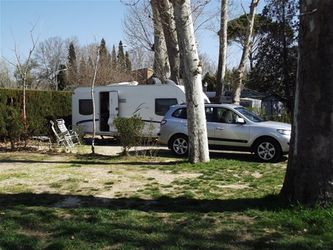 There are a number of sites in and around Madrid, and this one is to the south of the city, in an attractive town famous for its royal palace and gardens which are known as the Spanish Versailles. Madrid can be reached by train, and it's also within easy reach of Toledo.The site is medium sized, grassy, with lots of tall plane trees. Pitches are colour-coded according to size - yellow, red and blue (the largest) and with an ACSI card the charge is the same for all of them. The yellow pitches are very small, but the red and blue are of a good size. Some are so deep it's possible to park up without unhitching - useful for people passing through. There are a lot of permanent pitches as the site is popular with Madrilenos at weekends, and a lot of the touring pitches are in among them. We found it peaceful from Monday to Friday, but it would probably be pretty lively at weekends.The three toilet blocks were all clean, enclosed and well-heated. Showers were fully controllable, wash basins had soap, and some were inside cubicles for privacy.In summer there are a lot of organised activities and a good-sized swimming pool. Bikes can be hired and the surrounding parkland is ideal for cycling. The site has a good supermarket and an excellent restaurant and bar, with a terrace overlooking the river. The set menu was good value at 9 euros.There are plenty of shops and supermarkets in Aranjuez, including an enormous Leclerc. The Royal Palace and town centre are a short walk from the site through pleasant gardens. There is a road-train which does tours of the gardens, and boats for sightseeing trips on the river. Canoes can be hired from the campsite.A lot of people use this as a stopover on their way to the Costas from Santander/Bilbao, but it's worth spending a few days as it's an interesting area. 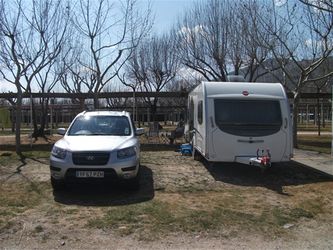 This is the biggest, and most well-organised, site we have ever stayed on! Reception has six check-in desks which were all busy when we arrived, a week before Easter. A man in a golf buggy showed us to our pitch, and he was careful to spread everyone out so we weren't all on top of one another.The site is all on a level and laid out in a grid-pattern. Pitches are grassy and a reasonable size, and there are some extra-large ones for people with RV's. There are trees for shade and about half the pitches have permanent sun canopies.There are well-separated areas for tourers, tent campers, bungalows and permanent caravans. As anyone who uses Spanish sites often will know, the Spanish love to go to campsites at weekends with their large families, usually staying in their own statics or bungalows, and they can be somewhat noisy - so it was a nice touch to have the touring area well away from the hubbub!There is one large central sanitation block, very smart and clean, with roomy showers of the push-button type but with controllable temperature. The washing-up and laundry sinks are under cover and have hot water. Washing machines cost 3. 50 euros. Everything is fully enclosed and heated in winter.There is a large bar and restaurant and plenty of entertainment and sporting facilities. There are 3 large swimming pools and one smaller children's one. The supermarket is large and there's also a souvenir shop in high season. Wifi is free but available only in the bar.The surroundings are very pleasant, and look more Austrian than Spanish - mountains all round, lush green fields full of cattle, and even chalet-style buildings. There is a bus to Madrid but it's a long walk up to the main road from the campsite.There is also a station in the town of El Escorial. If it's Madrid you want to visit, there are more convenient sites than this; the great attraction here is the huge monastery-cum-palace of El Escorial which is austere but impressive.Another interesting place to visit is the Valle de los Caidos, not far from the campsite. This is where Franco had a vast mausoleum hewn out a mountain, to house his body and act as a memorial to the dead of the Civil War. As a monument to Fascism it's creepy and disturbing, and was almost entirely deserted when we were there.Security on the campsite is fantastic. Staff drive round in vans or golf carts keeping an eye on everything.My only complaint would be that there was very little tourist information available in reception, and everything was so well-organised it was a little impersonal.Nevertheless, a very pleasant site that I would recommend. At 16 euros a night with ACSI it was good value