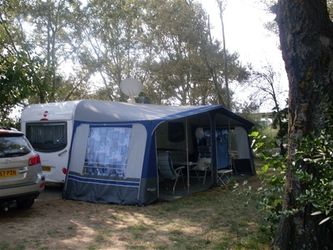 This is the first campsite you come to if, like us, you've taken the overland route to Greece via Romania and Bulgaria! It's a good staging post before moving on, either East to Turkey or West to other areas of Greece. It's a very large, well-run municipal campsite with spacious hedge-marked pitches, all with a hardstanding area and a grassy area shaded by trees. Reception is manned 14 hours by friendly, English-speaking staff. In high season there is a mini-market and taverna and it might well be fairly lively and noisy, but in September it was quiet, though by no means deserted. There's a large beach adjoining the site with beach bars and activities, though again they were closed by late September. The toilet blocks are good, very clean, with toilet paper provided and plenty of hot water. The washing-up and laundry sinks are completely under cover, very useful in a year-round site where it can get quite chilly in winter. The only drawback is the lack of a washing machine. As is common in Greece there are a number of stray cats who are very grateful for titbits!The bustling town centre is a short walk away. There are some pleasant sea-front cafes and tavernas, and plenty of supermarkets and other shops, and a large weekly market. A short drive away is the Ebro Delta which is a nature reserve noted for birdlife. 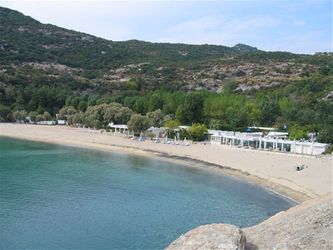 The main attraction of this site is its beautiful location in a small rocky cove with a sandy beach and a view of the island of Thassos. Apart from the campsite there is just one hotel/restaurant and a taverna. In high season the site has a swimming pool, snack bar, water sports and entertainment, but in late September these were all closed. Luckily the taverna, which is independent of the campsite, is open Friday, Saturday and Sunday in low season.We didn't mind the lack of facilities, but the site was untidy and litter-strewn, and the pitches and toilet facilities were poor. Pitches are hedge-marked and rather small - no room to park the car on them - and it's tight getting round some of the corners. We had to unhitch the van, and the staff (who are very pleasant) helped us to push it into place! There are a lot of trees for shade - too many, really -and the ground is dusty soil and sand. The toilets and showers are not particularly good - no seats or paper, and some locks and lightbulbs were broken when we were there. There was no washing machine and the laundry sinks were in a building roofed with polythene sheeting!Luckily there are lots of things to see and do in the area. Nearby Kavala is a lively port in a lovely setting, with a fascinating old town and castle. The ruins of Phillipi are only 15 km away, with extensive Greek, Roman and early Christian remains. This is where St Paul preached and was imprisoned. There are some pretty little resorts along the coast west of Kavala too.It may be that the site would be cleaner and better-maintained in high season, and the location would certainly be idyllic in warm weather. 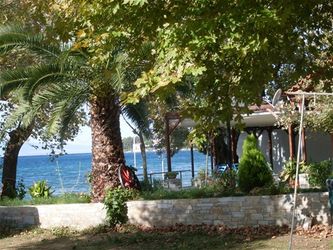 A delightful site set amid ancient olive trees just a few metres from the warm, shallow waters of the Pagasitic Gulf. To reach it involves a slightly hairy drive through the busy, chaotic centre of Volos, then about 17 km of rather twisty coast road. There are plenty of touring pitches but as summer was over these were not being used and we were shown to a pitch among the dozen or so semi-permanent caravans and motorhomes which belong predominantly to Germans who spend the summer here. As we arrived many of them were packing up ready to go home.There is a taverna which is open in summer only, but the bar was open and was a popular gathering-place in the evenings for watching TV and using the internet. The toilet facilities are smart and modern, though as always in Greece a few things don't work! There's a room for washing-up and hand-washing and a washing machine which costs 5 euros, but soap powder is provided. There's a small shop, and the village of Kato Gatzea has a minimarket, a chemist and an excellent baker. There are a handful of bars and tavernas along the seafront.The Pelion peninsular is very scenic and little visited by British holiday makers. The sheltered Western coast has a succession of small resorts and the mountainous, wooded interior has some interesting villages. We had a memorable trip on the narrow-gauge 'little train of Pelion' which goes from a station not far from Kato Gatzea. It winds its way up into the hills, revealing wonderful views back down to the coast, and terminates at Melies, a quaint old village with a good taverna in the central square, a small folk museum and an old church with lovely frescoes.This is an area we would love to go back to, very unspoiled and relaxing. 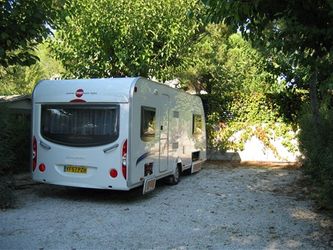 We had intended to make this campsite our base for several weeks as it's on the coast but within easy reach of Athens. The pitches are large and hedge-marked and the adjacent beach is lovely. At this time of year many of the site's facilities were closed, of course, but what remained were in a very poor state of maintenance. The electric hook-up wasn't working at the first pitch we tried. (When we told the manager he wasn't interested.) The toilet facilities were basic to say the least. The light in the washing-up room wasn't working so in the evening we had to wash up in the clothes-washing sinks outside the gents' toilet. The manager didn't seem bothered when we checked out next morning even though we originally told him we would be staying for a while. It may be better-run in high season but we would not recommend this site for a low-season stay! 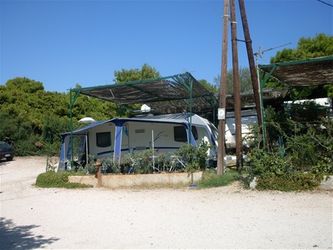 This is probably our favourite campsite in Greece, though at first glance it doesn't look anything special. It's a small site, with only 10 pitches for tourers, and some room for tents. In addition there are about 30 statics, mostly owned by Athenians who come for the weekend, go fishing, have huge, jolly meals where they barbecue the fish, then go home again. The touring pitches are hardstanding and not very big, but the owner, Dionysos, is enormously obliging and even demolished a small wall in order to shoe-horn our large caravan in, assisted by several family members and residents. Then we all repaired to the bar for a much-needed ouzo.It's the atmosphere rather than the facilities that's the attraction here. The toilet block is fine and soap and toilet paper are provided, by no means the norm in Greek sites! There are the usual washing-up and laundry sinks (though at weekends they tend to be full of people cleaning the fish they've caught) and a washing machine for 5 euros. The taverna is open in summer only, but the bar stays open, and there is a kitchen with cooking facilities and a fridge for tent-users. As usual in Greece there is a population of friendly cats!There's a nice sandy beach about 100m away, with rocky paths that take you to another bay. In fact you can walk the 4.5 km to the famous Temple of Poseidon, though we chose to drive. There is a mini-market and a baker's within walking distance, and it's about 3 km to the nearest town, Lavrio, which has 2 good supermarkets.There are all sorts of interesting ruins in the vicinity - in ancient times Lavrio was a great centre of mining and smelting, and there is a ruined theatre and several tombs to explore. A little further afield is the Temple of Artemis at Vravrona. However the main attraction is the proximity of Athens. It's about 30 minutes' drive to the nearest metro station - the metro system was greatly extended for the Olympic Games and is efficient and cheap.We spent 6 weeks here in October and November and it was still warm enough most days to swim in the sea. A very friendly, laid-back and typically Greek campsite.