This site is right in the centre of Umbria so is a perfect base for exploring this historic and picturesque area. Bevagna and Montefalco are right on the doorstep, Assisi is 22 km, Perugia 35km, Orvieto 50km. In fact virtually every small town and village in Umbria is worth seeing!Pian di Boccio is an 'agriturismo', a working farm with a campsite, swimming pools and restaurant, set on a hilltop and surrounded by typical Umbrian countryside. The family who run it are friendly and helpful.The farm has olive groves and walnut orchards, and there are acres of land to explore. A traditional old farmhouse has been converted into holiday apartments and there are some cabins and bungalows for rent. There are no pitches as such, but some flat, grassy areas and lots of places in the pine-woods, though larger outfits might have trouble accessing some of these. There are numerous EHU's throughout.In high season there are a lot of activities - three swimming pools, tennis courts, volley-ball, a football pitch, a lake for fishing, and archery. There is a bar, a small shop, a pizzeria and a restaurant, and the farm's own produce is on sale - three kinds of olive oil and various conserves, both fruit and vegetables.There is wifi, but during our stay there were some problems with it.As we were there in low season it was very quiet and only one of the pools was open, but it was a good size and very welcome in the heat. Only one of the two sanitary blocks was open, and although clean and modern it was a little odd. The cubicles had both a shower and a toilet in them, an arrangement I've not come across before! As the site is not on mains water but uses its own wells, showers are operated by tokens. There is a charge, but tokens are free to those using ACSI cards. There is a much larger toilet block in the woodland camping area, which is open in high season.There were never more than a dozen other 'vans there during our stay, almost all Dutch, and we enjoyed the peace and quiet, broken only by the cuckoo in the woods, and a couple of peacocks in the aviary next to the shower block!It was a site that grew on us. At first we felt it was a bit basic, but we came to appreciate the peaceful atmosphere. In high season it would be very different, and while it wouldn't appeal to us so much, it would be great for families who like activities.The local town, Bevagna, is a little gem - a perfectly-preserved medieval walled town, with interesting narrow streets and some good restaurants. For a selection of larger supermarkets, Foligno is only 10 km away. 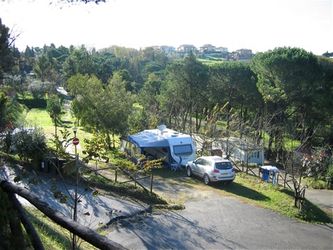 This is another of those sites that would be very pleasant in the summer. There are terraced pitches, some bungalows, plenty of trees for shade and views of the Appenines. In November it was perfectly adequate, but of course the swimming pool and pizzeria were closed, and only one toilet block was open. Pitches vary in size and aren't marked, so we were able to choose a nice large one, although it was slightly sloping. The ground got a bit muddy when it rained but this would not be a problem in summer.The toilet block was very clean and modern, fully enclosed and heated,though there was no loo paper. There was another, more open toilet block but it was closed during the winter. Unfortunately the washing-up sinks and washing machines were in the open, without even a small roof, which was inconvenient in the rain! Reception was staffed by a helpful young lady who spoke good English, and there was free wifi.The town of Montopoli is very small and quaint. There is a medium-sized supermarket 3km away in San Romano, and a huge shopping mall 15km away in Empoli, which also has a station for trains to Florence.The campsite is very well-placed for visiting the many interesting towns in the area. We visited Florence, Siena, Lucca and San Gimignano, and although the weather was cold it was wonderful to see them relatively free of tourists 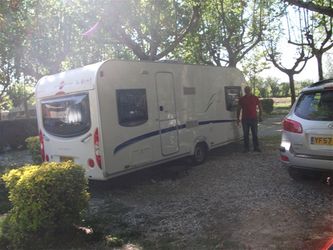 We chose this campsite as a base from which to visit the Cinque Terre. It's a medium-sized site, on level ground shaded by plane trees. Pitches come in two sizes, small or medium, and are separated by hedges.There are two unisex sanitary blocks, new, clean but not luxurious. Loos have seats but no paper, showers are push-button and fixed temperature. On our first morning they were cold and when we reported this to reception they got it sorted. The locks on both loo and shower doors are a bit tricky and we both had trouble getting out of them on a couple of occasions!We didn't use the restaurant/bar but it looked pleasant. Wifi is available in the bar, but if you have a pitch near enough you can also get it in your van.We were disappointed to find the swimming pool not open and the laundry room empty of appliances. When we asked at reception they said the site had been underwater in the serious floods of October 2011, which also caused damage in the Cinque Terre area.The washing machines had been ruined and there was so much damage to repair that things were behind schedule. All the shabby permanent caravans mentioned in a previous review were gone, replaced by smart new mobile homes for rent, which were being installed while we were there.The site is near the River Magra and has a peaceful ambiance - no road noise. We took a boat from nearby Lerici to the Cinque Terre and found this a very pleasant way of seeing the villages, worth the 25 euro cost. You can also take the train from Sarzana which is much cheaper but not as scenic.Because of the flood damage we didn't see the site at its best but it should be back to normal by high season.The approach road is long and very narrow, with few passing places and a couple of sharp bends, so care is needed. 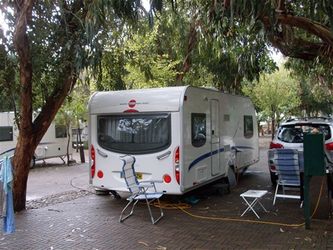 This large, 5-star campsite is right beside the sea, although there is no beach at this point, just a rocky breakwater. Unusually the site is entirely brick-paved. This meant it was very easy to level the van and there was no mud - useful, as the weather was wet and wild - but it would be difficult to put an awning up.The very pleasant restaurant and bar are open all year. The toilet blocks are clean, modern, completely enclosed and heated in winter, but we found the water was not very warm, and it was the same in the washing-up area. The launderette equipment was in need of refurbishment.There is a lovely swimming pool and the whole site is very nicely landscaped, with palm trees, eucalyptus and flowers. There are a number of bungalows for rent. Reception staff were helpful, and in high season there are a number of organised excursions and activities, and San Remo itself has all the usual seaside facilities.There is no shop on site but a supermarket within a short walk. On the down side, however, the site is very expensive (although we were ok as we used camping cheques), there is some noise from adjoining clay-pigeon shooting, and the electricity is only 3 amp so we couldn't even use our electric water heater!