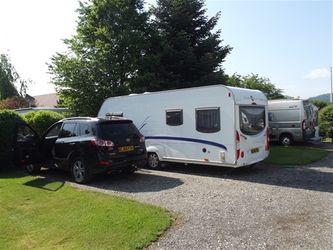 We chose this site as a stopover because we were intrigued by the concept of a site specially for the over 50's. It's a family-run enterprise with the aim of providing 'comfort, rest, quality and recreation'. We wondered if we would be asked for proof of age - sadly, we weren't, so we obviously look our age!It's a very attractive and beautifully-maintained site, comprising a guesthouse, restaurant and bar with terrace, and pitches arranged in groups of 6 which gives it a cosy feel. The gravel pitches are large and are surrounded by grass, trees and shrubs. There is a 'bio swimming pool' which is actually a large pond with water lilies, surrounded by a pretty garden and terrace with seating. There is a meadow area with a giant chess set, and a few extra-large pitches near by (these don't qualify for the ACSI price. )The sanitary facilities are in the spacious basement of the house and are roomy and luxurious - worthy of a 5-star hotel. The only concession to older people is a built-in seat in each of the showers. There is also a small toilet block near the pool, which is some distance from the house.Fresh bread is available in the morning, and on Saturdays there's a barbecue. There's even a herb garden just for guests' use!The village of Fisching is very small but it's an easy walk to the next village, Weisskirchen, where there are a few shops and bars and a reasonable supermarket. It's excellent cycling country, being set in a wide, flat valley with mountains all around, and there are plenty of cycle paths and routes. There's a thermal spa not far away.It was fairly full when we were there, so is obviously fulfilling a need. It would be a very relaxing place to stay for a week or two. The 2016 ACSI price is 19 euros but is well worth it. 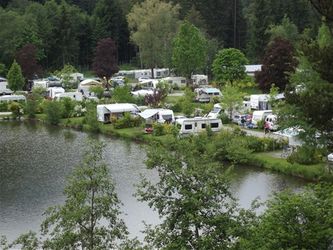 On the plus side the facilities at this site are truly luxurious, the best (and roomiest) showers we’ve ever come across. The setting is very scenic, with lovely views, and there are lots of things to do, including organised activities for kids and walks for adults.The lake is divided in two, one half (which is full of giant carp) for boating and the other half for swimming, complete with water slide and inflatables. The restaurant is on the lakeside but we didn’t use it as it’s quite expensive, as is the shop (€2.50 euros for your breakfast baguette).On the minus side: The pitches come in several sizes but if you use an ACSI card you are only entitled to the smallest, which only have 6 amp electricity (the others have 16 amp. ) It doesn’t mention this in the ACSI book. These basic pitches are so small we couldn’t fit on, so had to pay a supplement to have a bigger pitch (although it still wasn’t particularly spacious. )We were also charged a supplement for some of the nights we were there, because they were classed as peak season - again, not according to the information in the ACSI book. And on top of this there is a tourist tax of €4.50 a night. So not the best site if you’re on a budget!Many of the pitches are quite badly worn, with large bare patches which become very muddy when it rains (which it did frequently during our stay. ) We felt it might have been better if they had spent a little less on the state-of-the-art showers and a little more on the state of the pitches.The site has Wifi throughout but it was the amongst the worst we have ever come across, as the server kept losing the connection or was very slow. When we mentioned this to reception they said there weren’t enough lines for the amount of traffic, and gave us 2 free hours.It was a very noisy site, with outfits arriving and departing constantly from early morning until late evening. The staff whiz round the site on Segways which make a loud whining noise. Innsbruck Airport is not far away so there is some noise from low-flying aircraft, although not too frequent. We also found a lot of the campers (who were mainly Austrian and German) noisy and inconsiderate. So, not a campsite for a peaceful, relaxing stay!There are a lot of mosquitoes around the lake so avoid lakeside pitches if you react badly to bites.But, on a more cheerful note, the facilities block has an exhibition of the world’s largest collection of toy and model caravans and motorhomes! 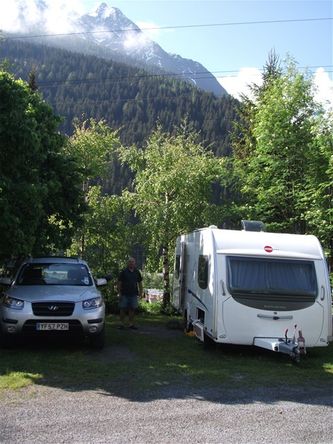 This is a small, very rural site - we had a field of cows just behind our caravan. The pitches varied in size and were adequate rather than generous.There's also a field for tents. There are wonderful views of snow-capped mountains all round, but there is some noise from the motorway and railway in the valley below.Like many sites in Austria, it's very popular in winter with skiers, and has excellent cold-weather facilities. The washing-up room, toilets and showers are in the basement of the main building, well-protected from the elements. However the showers were simply the type of cubicles you might have in your own bathroom, so there was no privacy - just a public undressing area where you had to leave your clothes. This might put some people off!As an overnight stop this site was fine, but unless you are a keen skier I wouldn't recommend it for longer stays. 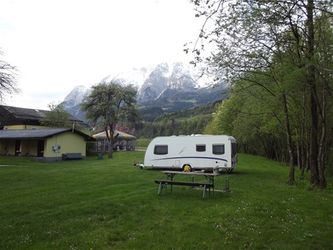 This camp site is about 30 minutes drive south of Salzburg, in an idyllic location with stunning mountain views. It’s on a long, narrow grassy field beside the River Salzach. A railway line runs along the opposite side of the river and the trains can be quite noisy. There are no marked or numbered pitches, and not many EHU’s. There is a small shower block (tokens are needed), two outdoor washing up sinks, a washing machine and a small bar/cafe doing pizzas etc in high season. The owner is very pleasant and helpful.However, it’s really only suitable for use in high summer. We arrived at the end of April and although the sun was shining in the day, the temperature plummeted at night to near zero. This wouldn’t be a problem in a site with a good, enclosed, heated shower block, but the facilities here are very basic, although clean. Not only is the block not heated, it has some unglazed openings under the eaves which let cold air in, so it’s freezing inside! Also, one of the two showers has no privacy and nowhere to hang clothes or towel. The second shower is in a small separate room which is private but just as cold. There’s very little lighting on site either, except outside the shower block, so a torch would be useful.It would be a great place in summer for outdoors types – there are numerous walks in the surrounding mountains. However, if the camp site was full the sanitary facilities would be stretched. It was quite dear, at 20. 5 euros, although sites near Salzburg are expensive, with no ACSI sites in the area.After one night we moved to a site nearer to Salzburg, with lots of facilities and a luxurious, heated shower block. Vierthaler’s a lovely site, it just wasn't the site for us. 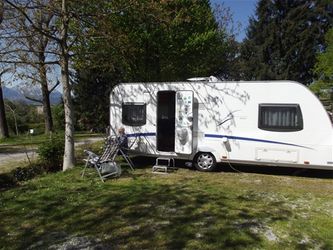 The toilet block is one of the best we have ever come across - spacious, modern, clean, and - important in low season - heated. Toilet paper, soap, hand dryer, hairdryer, lots of mirrors. Plenty of hot water, and not push button, thank goodness!There's a large laundry room with 3 washing machines, 3 dryers, a sink for hand laundry, 3 washing up sinks and a fridge for tent campers. There's fresh bread in the morning baked on the premises, a small shop, and a restaurant in high season. The views are fabulous, even the 5-minute walk to the bus is through a pretty meadow and over a stream. Despite the nearness to the autoroute the site was very quiet, unlike others in the Salzburg area which have both road and rail noise.It's a relatively small site, and pitches are on 4 terraces, so the overall effect isn't at all regimented.It's not cheap at 33 euros, but then no sites in the Salzburg area are cheap (there are no ACSI sites anywhere nearby. ) Having just paid €20.50 for a site with very basic facilities, unheated shower room and unmowed grass, we were very glad we'd moved. We felt it was worth paying a bit more for 3 very civilised, comfortable nights.