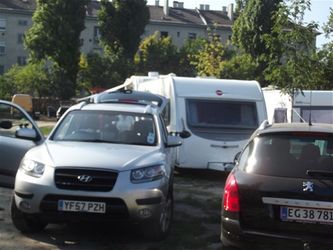 We had seen favourable reviews for this campsite and chose it as being the most convenient site for visiting Budapest. Unfortunately it didn’t live up to expectations, to put it mildly. To be fair, city-centre sites are often busy and noisy, and Hungarian sites can be a bit basic. In low season, when not so crowded, and at ACSI rates, Haller Camping would just about be acceptable. In high season, packed in like sardines and at the equivalent of 25 euros a night, it was purgatory!The approach to the site was off-putting, up a narrow residential street with cars parked on both sides. There was a queue to get in, made more complicated when cars wanted to leave the campsite and everyone had to reverse to let them out – a tricky manoeuvre in a narrow road. However, on the plus side, the reception staff were very friendly and spoke good English, and told us to drive in and find ourselves a pitch. We had phoned about 40 minutes before, as we approached Budapest, and were told there was plenty of space. The site has two separate areas.The first area, to the left of reception, has some shade from mature trees, but was almost entirely covered with small tents, and looked like Glastonbury without the mud! We drove up a short slope to the second area, mostly caravans and motorhomes, but with some tents too. Here there was no shade, just a few young trees which will take quite a few years to become any use as shade. There were no numbered pitches, just a free-for-all, with units pitched at all angles very close to each other with no regard to safety regulations. The ground was covered in a spaghetti of extension leads. We squeezed into what appeared to be the only available space, but several more units arrived later and were somehow shoe-horned in.The photo in the ACSI book shows a grassy surface, but that must have been a few years ago – the grass has been almost entirely worn away, leaving an uneven surface of bare, dusty earth. It must get very muddy if it rains.The sanitary facilities are very basic, housed in a sort of portable cabin. The toilets have seats and paper, and were cleaned regularly, but the showers lacked privacy, with a communal changing area and only a few pegs, several feet away from the showers, to hang towels and clothes. However there was ample hot water and the showers were fully controllable. Because of the dusty conditions underfoot the floor of the shower block got very muddy.The washing-up sinks were fine, outside but under cover and with hot water. There was a laundry room with free washing machines and communal drying racks, and during our stay it was in constant use. Wifi is free and available throughout the site, but the connection was very poor.We didn’t use the bar or restaurant but they were very popular. There’s no shop but some supermarkets close by. Surprisingly there was little traffic noise, but a great deal of “people” noise! We had originally intended to stay four nights but couldn’t face more than two. There is a metro station nearby so it’s easy to get into the centre of Budapest, where we used one of the “hop on, hop off” tour buses to see the sights. A boat trip on the Danube was included in the price, which was 5,000 forints (about £14.)Although conveniently situated, I have to say it was one of the worst sites we’ve ever stayed in! 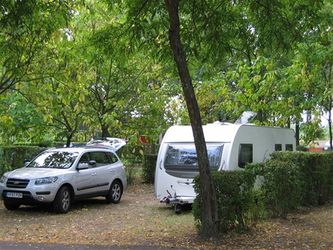