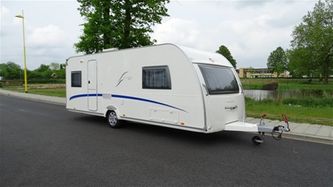 This was a caravan we would be living in for at least a year so we had some very specific needs.

We spent a long time researching the market and eventually found just the job at MG Caravans in Todmorden.  It was just one year old and was being sold privately by the dealer on behalf of a customer who had decided after one trip he wanted a motorhome. The big plus was that it came with all the extras, awning, gas cylinder, water barrel and wastemaster. It even had a built in satellite dish for TV reception.  All we needed was crockery, cutlery, cookware and bedding.

Being of German build meant that it was solid as a rock, a benefit we noticed after 100 miles of cobbled roads going through Bulgaria, which would have rattled many a caravan to pieces.

We took delivery in January 2008 and eventually sold it in June 2020 in almost as good a condition as we bought it.  Obviously there were a few dings in the bodywork, but it had a clear damp report, the most important factor in looking at an older van.