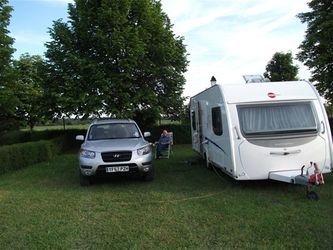 Excellent site in a pleasant, leafy village on the outskirts of Luxemburg City, next to a large park. There is a rather tight turn into a narrow approach road. The site is level and grassy, with pitches of varying sizes, mostly hedged. When the very friendly lady in reception saw that we had quite a large caravan she allocated us an absolutely huge pitch!The sanitary facilities are modern and very clean, with loo seats, paper, soap and hand-driers.There is a small bar/restaurant but it is closed on Wednesdays, which is the day we were there. However there is a Chinese restaurant just across the road from the campsite, and a pizzeria a short walk away.The site has a large children's playground, 'beach' volleyball pitch and boules pitch.We used it as an overnight stop but it was so pleasant it would be worth staying longer. And at just 11 euros a night with our ACSI card it was fantastic value! Highly recommended 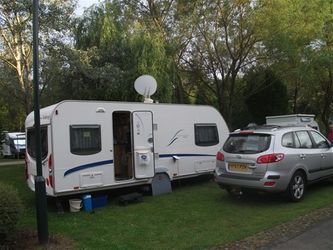 The last time we stopped over in Luxembourg we used the excellent Bon Acceuil site, but after reading a recent post about having to arrive there really early to get a pitch, we decided to try Kockelscheuer.As others have said, it's a very pleasant site with large, level, grassy pitches. When we were there it rained heavily but the ground didn't get too waterlogged. There are two excellent shower blocks. The only complaint we had was that the push-button for the shower only lasted a very short time.The washing-up sinks are a bit odd - there are no draining boards of any sort, but the sinks are very long, with room for both a washing-up bowl and for draining the dishes. The taps are cold water only but there is a hot tap in the laundry room nearby to fill your bowl from. There were no separate sinks for hand-washing of clothes, so presumably you have to use the washing-up sinks.For us the main disadvantage of this site was the noise of aeroplanes taking off and landing. They weren't particularly frequent, but the last one at night was after 11 pm and the first one in the morning was at 6. 15 and woke us up - it was so loud the whole caravan vibrated!On balance I would have to say I preferred Bon Acceuil, which also has a better selection of restaurants and supermarkets close by.