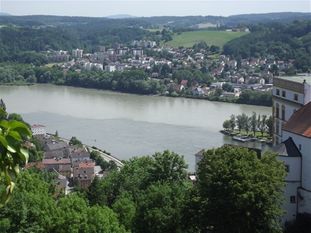 We had a last day on the lovely beach at Moscenicka Draga, and this time John spent more than 30 seconds in the water – it might have been as much as three minutes! There was no breeze and the sea was flat calm – perfect for swimming.  The resort was beginning to get busier, a few more places were getting ready to open, more sun beds and parasols appeared on the beach, and even a few pedalos.  A mini cruise ship put in at the harbour and the passengers spent a couple of hours on the beach – we chatted to a couple from Scunthorpe.  Speaking English to anyone other than ourselves was a novel experience!

In the afternoon we made another brief visit to Opatija, to see the gardens of the Villa Angiolina which had been in the process of being planted on our last visit.   Then it was a case of taking the awning down and, sadly, getting ready leave Croatia the next day.Our journey back to the ferry at Ijmuiden would take us through Slovenia, Austria and Germany again, but taking a different route and staying at different places than on the trip out.  Our first night's stop was Lake Bled.  We’d stayed here four years ago, but in autumn, when it was fairly quiet, and it rained a lot.  This time it was warm and sunny so we set off to walk round the lake.  The top end, by the campsite, was relatively quiet, but the bottom end by the town was heaving, with a constant stream of coaches disgorging visitors from all over the world.  Most of these proceeded to stand with their backs to the lake and take endless selfies.  We made our way through the hordes and returned to the more tranquil lakeside path back to the site.  We’d hardly got in the door when the rain started!  Luckily it stopped after an hour or two, so we walked to the campsite restaurant and had an excellent meal.  I wish I could say the rest of the campsite was excellent, but we felt it had deteriorated since our last visit – a victim of its popularity, like Bled itself.Next day we crossed the border into Austria (the border is actually halfway through the 4.9 mile long  Karawanken Tunnel!) Our morning coffee stop at the Worthersee services must be one of the most attractive anywhere – sitting in the sun on a terrace overlooking the picturesque lake. We left the motorway at Klagenfurt and drove through pleasant countryside of wide, flat, fertile valleys bordered by mountains.  We’d chosen our next camp site because it sounded intriguing – its name was 50 Plus Campingpark, Fisching.  We’ve come across adults-only sites before but never one specially for oldies!  John was rather offended that we weren’t asked for proof of our age!  It was a beautifully laid out site, consisting of a large guesthouse with bar and restaurant, and behind it a long, narrow camping area with generously sized pitches, culminating in a pretty garden with a "bio-swimming pool".  This was actually just a large pond, complete with water lilies and newts!  There was also a big lawned area with a giant chess-set.  The showers were absolutely luxurious, and had built-in seats (the only clue that this was a site for wrinklies.)  Again, we were the only English in a crowd of Dutch and Germans.

The village of Fisching was tiny, but an easy walk away was the very pretty village of Weisskirchen, which had a supermarket.  The area was very flat and ideal for bikes, with cycle paths everywhere.

Next day we headed for a site near Passau, Germany.  It was a long and irritating journey.  We struggled to find anywhere to stop for coffee or lunch because all the services and lay-bys were full of lorries, and there were miles of roadworks leading up to the German border.  We’d been concerned that there might be queues at the border but we sailed straight through.  At Passau we drove along the side of the Danube (which looked alarmingly full), then through a couple of pretty little towns until we reached Camping Ferienpark Bayerwald.  It’s a large site with lots of facilities but hardly anyone here!  However it’s peaceful and green, and there are no marked pitches so we can spread out and relax.  And that’s just what we did for the rest of the afternoon, sitting in the shade of trees and reading our books.  The weather is very hot and humid, and there were a couple of rumbles of thunder, but they came to nothing.  As our store cupboard was bare we ate in the campsite restaurant and had a very filling three-course meal for 14 euros, followed by a quiet evening.We’d decided to spend two nights at this site, so on the next day, a Sunday, we drove into Passau and took advantage of the free parking on Sundays.  Passau is known as the “Drei Flusse Stadt”, or city of the three rivers, as it’s the point where the Danube, Inn and Ilz join.  The three rivers have different coloured water, and this shows clearly at the point where they merge.  The Inn is greenish, because it is fed by melting Swiss glaciers; the Danube is – not exactly blue, but brownish; and the smallest of the three, the Ilz, is very dark, almost black.  Passau is also a major port for those huge river cruise boats (Viking Cruises and their ilk – one of the German cruise lines had the splendid name of Worm und Kock.) Some of these boats are so long it would take half an hour to walk from one end of the observation deck to the other!  We sat at a pavement cafe in the square in front of the elaborately painted Rathaus (Town Hall) and watched them arriving, leaving and manoeuvring.  One of them, the Kristalleschiff, had a huge arched window decorated with glittering crystals - an interesting example of nautical bling. The old part of Passau is crowded into the triangular point of land where the rivers meet, the Dreiflusseeck, and is a delightful maze of cobbled alleys, grand baroque churches, pretty squares and dozens of cafes. We went into one of the churches, St Michael’s, where the traditional Latin mass was being celebrated in a side chapel, but we were allowed to look round the main part of the church.  It was deliciously cool inside – the temperature outside was in the high 20’s! On the walls of another nearby church, the Kloster Niedenburg, was a record going back hundreds of years of the heights reached by floodwater.  The highest flood ever was in 2013 and was well over head height.  There was a similar marker on the outside of the Rathaus.  Everything has been beautifully restored and, apart from the markers, there was no visible sign of damage. We couldn’t get into the cathedral as Mass was in full swing so we wandered the streets and alleys until 12 noon when Mass finished.  The organ was playing and the Baroque frescoes and cherubs were suitably exuberant.

Time for lunch, so we found somewhere with a shady terrace and had some sturdy Bavarian food involving enough noodles and dumplings to keep us going for a week, washed down with big mugs of beer.  Looking down over Passau from a craggy height is the huge fortress known as the Uber Haus, and we got a mini bus up to it, not for the fortress itself but the view over Passau and especially the meeting of the waters.  Then it was back down to the town and the purchase of various cutely irresistible souvenirs, before driving back to the camp site where we spent the rest of the day sitting in the shade of a tree with yet another glass of beer.  Then I performed a necessary operation on John – cutting his hair.  This is always a problem when travelling for any length of time.  I’d had mine done in a hairdresser’s in Moscenicka Draga, a difficult experience due to my lack of Croatian and the hairdresser’s firm belief that all tourists were German.There was a thunderstorm in the evening and it rained for most of the next day.  We were on the road again, aiming for a site on the banks of the Main near Wertheim, and the combination of heavy rain and frequent roadworks meant the journey took hours longer than we expected.   However the campsite was pleasant, although fairly busy as it’s a popular overnight stop on the way north (or south.)  The river was looking very full and, just as in Passau, the main campsite building had flood markers on its wall, and the most recent, 2011, would have meant the caravans were completely submerged.  Sometimes we forget that the UK isn’t the only country in Europe that has flooding. However it was very pleasant watching the swans and ducks on the water and around the campsite. The enormous freight barges chugging up and down the river were a bit noisy though!And so on to our final camp site of this trip, and rather a strange one.  Its name is quite a mouthful – Erholungszentrum Grav Insel, near Wesel.  It’s one of those massive sites the size of a small town, with every form of recreational activity catered for, with restaurants, supermarket, laundromat and a petting zoo. In fact it was this feature that attracted me, as there is a donkey among the other animals.  Sadly, in the low season the zoo is only open at weekends, so the nearest I got to petting a donkey was the life-size plastic one near reception!  After going for a walk round a very small part of the site (a full tour might well take all day) we sat in the sun and watched the strange goings-on around us.  Most of the caravans had awnings and looked as if they’d been there for some considerable time.  However, their occupants were busy dismantling the awnings, some of which had decking, built-in furniture, shelving, large fridges and other semi-permanent features.  Meanwhile convoys of trailers kept arriving, loading up the awnings, and driving away.  This went on until after sunset.  We decided that, as it was May 31st, their tenancy had expired, but that didn’t explain why they’d all left it to the last minute.  Oddly, the caravans themselves remained, with large, bare, muddy patches where the awnings had been.Next day we headed for the Netherlands and our ferry home.  After a drizzly start the sun came out and we expected a calm crossing.  The boat sailed at 5.30 and we spent some time on deck before going inside.  It was interesting to see the contrast between the industrial north bank  and the resort to the south.    The boat was much busier than last time, with several school parties and dozens of bikers on the first leg of their journey to the Isle of Man for the TT races.  We went to bed about 10.30.  Then we seemed to enter a different universe.  The boat started rolling and wallowing, with occasional juddering shocks as if we’d hit something.  I’ll draw a veil over the rest of the voyage, which seemed to go on forever.  Let’s just say I’m never going on a boat of any sort ever again, and leave it at that!In spite of the rough crossing we docked in Newcastle exactly on time and headed south on the A19 to be reunited with our gorgeous little granddaughter (and of course her parents, Mike & Nicole),