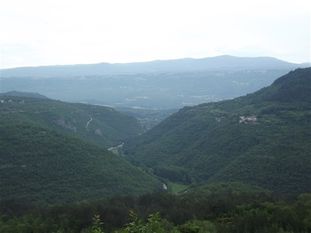 A trip to a different IstriaWhile the coast of Istria was occupied and ruled by the Venetians they never really got a grip on the inland regions. These were held by the Hapsburg- ruled Austro Hungarian Empire.  The development of the culture of the region was thus quite different.  After the war, when Tito and his communist party took control, Yugoslavia went through a phase of industrialisation, which required coal and power, which was plentiful in Inland Istria.  He was happy for the coast to continue to cater for tourism, and as we know, the introduction of package holidays in the 60's and 70's gave the coast prosperity.  Meanwhile he built factories and power stations to make use of Inland Istria's coal resource. Following the death of Tito and subsequent collapse of Yugoslavia, Croatia found, much like Bulgaria and Romania, that its factories were producing out of date goods which were not acceptable to modern Europeans.  Think of the Yugo car (based on the old Fiat 128) or its sister the Zastava (Mustava Zastava!)  The end result was that, while the coast continued to prosper, inland Istria has suffered a steep decline in its prosperity.  Fortunately for us, the visitors, the countryside is still as beautiful as ever, merely marred now and again by a derelict factory or a collapsed mining town.Our journey took us south along the coast, past Brestova whence the Cres Ferries sail, to the inlet at Ploma which provided magnificent views across the strait to Cres and inland up the deep fjord.  At the head of the fjord was a huge chimney, perhaps 300ft tall to take it from ground level to above the hills either side, taking the smoke from a coal burning power station.We then turned inland and climbed over the coastal range to the central plain and the city of Pazin.  Set almost at the dead centre of Istria, Pazin was chosen by Tito to be the capital of the province, much to the annoyance of the bigger and more important cosmopolitan centre of Pula on the coast, which, after all, had been the Roman provincial capital and had the amphitheatre to prove it.  Pazin had no industry and was surrounded by fields.  Yes, it had a castle, but not much of one.  Tito however wanted to move as far away as possible from the old Italian influence on the coast.We found it to be a pleasant enough place, if not particularly inspiring.  Cosmopolitan enough to provide us with the first Americano coffee we have found in Croatia!  It also has a lovely 13th century church with a free standing campanile, and behind it was indeed the dead centre of Istria, an amazing terraced cemetery disappearing into the gorge below.We drove on over the hills past the lovely hilltop town of Draguc, following a route recommended by the Rough Guide, and diverted to the ancient village of Sovinjak. Here was an ancient church with frescos, an old castle, a number of old mansions, hostelries and houses, all on the verge of dereliction.  Set on a hilltop overlooking the beautiful Mirna valley, its situation is idyllic.  The buildings are stunning, yet all virtually abandoned.  One of the larger houses was in the process of being 'done up' but here is an amazing development opportunity for someone with some spare cash.  As we drove further we found more and more of the same, beautiful old villages lacking in TLC and falling apart.We stopped at the roadside for our sandwich lunch, and in the half hour we were stopped, looking at a stupendous view, only one car passed us.  Then we drove on to Buzet, which was said to be a more popular and more visited town.  Yet even here we were able to drive right up the old ramparts into the old town, along narrow deserted cobbled streets and park in the centre for a mere €1.  Although there were signs of a bit more prosperity there was still much dereliction, in spite of the fact that around the foot of the hill on which the old town was situated there were a number of huge hotels and coach parks aplenty.  As for opportunities for a drink or a loo?  Zero.

Our next targets were the villages of Roc and Hum.  The road between them is known as 'Glagolitic Alley' after the sculptures representing the history of the Glagolitic alphabet which appear every kilometre or so.  Both of us being linguists (of a sort, anyway) we find Glagolitic a fascinating subject, mainly for its complete uninterpretability (is that a word?).  It was invented in the 9th century by St Cyril and St Methodius when they came to Croatia to convert the pagan Croatians.  The Croatian language then had so many sounds that neither the Latin nor the Greek scripts would be of any use.  They therefore devised an alphabet of around 36 letters to enable them to translate the bible.  I have to say that for a nation most of whom at that time would be able to neither read nor write, this script would seem to be an impossible task, but then I am approaching it with Latin and Greek alphabets already carved into my memory. Rough Guide describes Glagolitic as being a cross between Cyrillic and Klingon! The need for it is obvious when you look at how Croatian is written in Latin script.  For example the letter C appears in three ways, plain, with an acute accent and with an inverted circumflex.  None of these sounds like an English C, soft or hard. It seems that Glagolitic proved far too hard to master for the rest of the Slavic peoples.  Disciples of St Cyril produced a simplified version in Bulgaria and called it after their master, Cyrillic.  However Glagolitic was still used in the Croatian Church until 1818, when the Austrians banned it as subversive, very much in the same way as years later Franco banned Catalan.  In recent years there has been a bit of a revival, hence the construction of the sculptures in Glagolitic Alley.  Lastly, why 'Glagolitic'? Because so many manuscripts began "U ono vrijeme glagolja Isus” (And then Jesus said).  In current Croatian glagolski means verbal.  So we drove up the alley to Hum.  The road is mainly single track, finishing with a couple of very tight hairpins, threading its way for eight or so kilometres, through rich pasture land and pretty woodland.  We stopped at small pull- ins by some of the sculpture sites, some of which were single sculptures, some were a range of stones.  Occasionally we met a car coming in the opposite direction, but managed to squeeze past each other.  Then, having pulled off the road for one of the displays, I was about to start again when I saw a coach coming round the hairpin bend ahead.  Naturally I waited.  He passed, then another appeared, this time one of those with double back wheels.  This one was so long he could not get round the hairpin in one go, he had to reverse several times to get round.  What a laugh.  We finally got to Hum. Paid our admission fee at the town boundary and were directed to the car park with strict instructions to go to the far end, as the near end was for coaches. Hum claims to be the smallest town in the world.  It has everything it needs to be called a town, (walls, gate, church, campanile, council and mayor) but has a population of fourteen souls.  Once again it was a place of two halves.  We entered through the town gateway, with very nice gates, to the town square with a nice portico and Mayor's table in front of a crumbling town hall.

The church looked good, but behind it were several crumbling buildings.  The one street was cobbled and most of the houses there were reasonable, with two or three selling local food and wine and souvenirs.  At the end of the street was a crumbling building which might once have been a castle.  There was one, rather smart, restaurant.  We wanted a coffee and a loo,  but the restaurant was fully booked, and there was a queue for the one loo.  We had seen a school party walking round, this must be their lunch.  There were certainly several school parties in the loo, judging by the noise.  Never mind, there must be something back in Roc.  We walked back to the car to see several more school parties walking down to the gate and several coaches in the car park.  On the drive back down to Roc we passed several more coachloads of kids and one of adults.  Fortunately each time we met one I was able to duck into an entranceway or gateway to let them past.  Only once did I have to reverse.We reached Roc, said to be another popular old village. The good old guidebook describes it as "dainty”, 16th century walls, Roman remains, strong folk music tradition with an annual folk festival and an annual accordion festival.   Sounds like a bustllng little village?  Dead.  Not only was there not a thing open, it did not look as if anything would ever open.  The only other couple of people we saw were also tourists.  What an opportunity for an afternoon tea shop with scones, cream and jam (or is it scones jam and cream?).  So we had to go back to the car, pick up the high road then the motorway and head for the coast, civilisation, supermarket and loos.