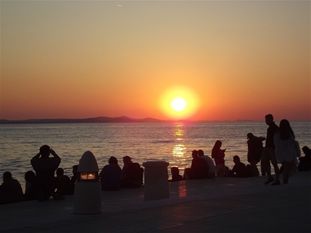 We left Ljubljana with some regret, feeling we hadn’t seen it at its best.  There had been an article in the Guardian a couple of weeks before we left, extolling it as an up-and-coming trendy destination with a lively cafe culture, but cafe culture needs summer weather.  Perhaps we’ll go back one day. We drove on near-empty autoroutes through the pretty Slovakian countryside – wooded hills, onion-domed churches and Austrian-style chalets. Stopping for coffee at some services we bought  bureki to eat later for lunch – delicious, sinfully greasy pastries stuffed with meat or cheese.  The temperature gradually rose as we travelled south.  We had to show our passports at the Croatian border, unusually.  The Croatian motorway was even emptier of traffic, but it made for an easy, pleasant drive to our destination, Autocamp Peros at Zaton.The campsite was basking in hot sunshine, so we changed into tee shirts and shorts, got ourselves settled, and John put the awning up.  We’d stayed here 4 years ago and liked it, and little had changed, although there were signs of renovations underway, including 20 smart new mobile homes with their own swimming pool in an adjacent field.  (The manager proudly told us these were all fully booked for the whole summer.)My first task was to get to grips with yet another alien washing machine.  This was a German one so the names of all the various washing cycles were in German. We could find very few of the words in our German dictionary so we had to guess and hope for the best.  Luckily none of our clothes came out shrunken or torn to shreds! After lunch I walked the short distance to the sea front and pottered about happily looking for shells.  Our house is already full of bowls and dishes containing shells from our previous travels, but there’s always room for a few more!!  Then we went for a short drive to the island of Vir.  Croatia has literally hundreds of islands of all sizes, and quite a few are, like Vir, accessible by a bridge.  It was pleasant but unremarkable, so we went on to Nin, another tiny island with a bridge and a very ancient history.  Having already described it in a former blog I won’t go into detail except to say it is as charming as ever and the ice cream is delicious!  It was a major town in Roman times when it was known as Aenona, and had the largest pagan temple in the whole Adriatic, of which little remains.  At the other end  of the spectrum, it also has one of the smallest cathedrals in Europe, the diminutive Holy Cross.  The salt pans which predate the Romans are still being worked, and there is a large modern museum telling you everything you ever wanted to know about salt.Next day we went to Zadar, another delightful old town with Roman, medieval, Venetian and modern buildings pleasingly jumbled together.  Again, we’d been (and blogged about it) on our last trip, but there are always new things to see and do.  This time we climbed the 180 steps to the top of the campanile of St. Anastasia’s Cathedral for fantastic views (then had to sit down with a beer to recover) and went in the excellent Archaeological Museum, which has  numerous finds from Aenona, including several large statues of Emperors.  But what we really wanted to see was the sunset, famously described by Alfred Hitchcock as “the most beautiful in the world.”  So we returned to the caravan to eat and generally relax until early evening when we drove the 8 miles back to Zadar.

The sea front is where everyone gathers, thanks to two interesting modern installations which enhance the whole sunset experience.  Both designed by local architect Nikola Basic and dating from 2005, they are the Sea Organ and its companion piece, Greeting to the Sun. On our previous visit to Zadar we hadn’t been very impressed with the sea organ, which relies on wave action to press air through a series of pipes set in steps at the edge of the sea, producing musical notes.  We now realise this was because the sea was dead calm on that occasion, but this evening it was quite choppy and the resultant sounds were extraordinary - loud but melodious.  As the sun slowly sank the crowds gathered and there was a wonderful atmosphere, with everyone taking photos.   As the light died the other installation came into its own.   The Greeting to the Sun isa large disc paved with light-sensitive tiles which store the light during the day and then release it in random colours and moving patterns.  The crowd gravitated to it and there were impromptu performances – a young man did a somersault and walked on his hands, a lady stood on her head and a toddler tried to copy her, to laughter and applause.  Gradually the crowd drifted away and the darker it became, the stronger the light patterns were.  Finally we too left, having had an absolutely magical experience. Meanwhile back at the camp site two cats had taken up residence in our awning.  One was a battered old tom, the other, a fluffy tortoiseshell, was obviously his missus. We always carry dried cat food with us to feed local strays, and Mr and Mrs Tom thought they had it made. Unfortunately they became rather demanding, and Mrs was on heat, resulting in some very noisy rumpy pumpy on our doormat! We spent another day exploring the island of Pag, 60 km long, accessible by a bridge in the south or a ferry in the north.  Our travel guide describes Pag as “a desolate pumice-stone of an island”, but it has a sizeable population of humans, and even more sheep.  In early times it was green and forested, but the Venetians cut the trees down to build their ships, the sheep ate all the grass and the infamous Bora winds scoured away the soil until nothing was left but poor scrubland.  There are extensive salt pans in the centre of the island, and the sheep survive on scrub and salty herbs, which gives their milk a special flavour, used to make the famous (and quite expensive) Pag cheese.Pag Town was rebuilt in the 15th century, is partially walled and has a grid-pattern ofnarrow streets of old stone houses.  To be honest, there wasn’t a lot to see, but we had a coffee, went in the church and then bought some cheese. Then we drove on to Novalja, a larger, modern resort, which apparently becomes “The Ibiza of the Adriatic” in July and August when there are music festivals and beach parties galore.  Thankfully for us that was a long way off, and all we saw was a pleasant, quiet off-season resort.  We ate a splendid lunch sitting on the terrace of a seafront restaurant – a Dalmatian platter for starters, with prosciutto-like ham, slices of Pag cheese, olives and anchovies, followed by a fish platter which featured various creatures which tasted a lot better than they looked.  This was accompanied by chard, cooked Croatian-style with oil, garlic, spinach and potatoes – unusual and delicious.After lunch we carried on to the very northern tip, the only part of Pag to have any trees, as there are olive groves here.  We had a drink in a cafe in the pretty little fishing village of Tovarnele.  Then we drove all the way back, by which time we were ready for some bureki!Soon it was time to move on, so John took the awning down, to the very vocal disgust of Mr and Mrs Tom.   We spent the rest of the day sitting in the sun and working out our route for tomorrow.  We’re off to the Krka National Park, which, confusingly, is nowhere near the island of Krk. The Croatian language is very strange, but interesting.