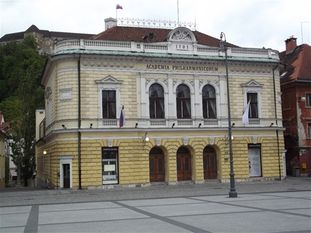 There are those who make a plan and stick to it, even when it is obviously not working and causing great misery. But enough of the politics. We had a plan, but, as Lesley said at the end of the last blog, we tore it up and redrew our trip.  The weather in Zagreb was forecast to be wet, it was still unseasonably cold, and so we had to head for the coast and to sites with either enclosed or heated toilet blocks!.  We are no longer of an age to cope with open air showering or breaking the ice in a toilet bowl first thing in the morning. Our target was to be Autocamp Perros at Zaton, north of Zadar, which we had visited in 2012 and enjoyed.  Too far to reach in one hop, we were to break the journey in Ljubljana, capital of Slovenia,  after a leisurely journey through the magnificent snowcapped Alps and two of the longer tunnels, the Tauern (4 miles) and the Karawanken (5 miles).The Alps were probably snowcapped, they were undoubtedly magnificent, but the low cloud and rain meant we saw little of them.  What we did see though was evidence of the huge snowfall there had been a few days earlier, the same storm that we had hit near Stuttgart.  There were piles of snow at the roadside and many broken tree branches.  Fortunately the road was clear and we were able to reach the Ljubljana Resort campsite by lunchtime.  Ljubljana Resort sounds quite splendid.  It was pleasant, spacious, nicely sited by a river, with a pool.  The pitches were roomy off season, but I suspect a bit crowded in high season.  The advantage of high season would have been that the male toilet and shower blocks would have been open, rather than having to share the female ones, which was a bit uncomforable.The lad at reception was very helpful and told us how to get the bus into the city, selling us a bus card loaded with the fares up front.  So after lunch we set off to the bus stop.  The bus, according to the timetable, was 10 minutes late, but we chatted with a nice old man from the coast who kept telling us how beautiful the city was.  As the bus got closer to town we felt things looked a bit sad.  Lots of smart new office blocks but they all looked empty and deserted.  Shops were closed and there were very few people about.  We got off just before the city centre to walk down the road between the station and the castle and there was hardly a soul in site.  Then it dawned on us, it was Bank Holiday Monday.  Our reason for walking this last stretch was for the architecture.  This part of the city was badly damaged by an earthquake in 1895 and was rebuilt in Secessionist style, the Viennese version of Art Nouveau.  There were many attractive buildings, perhaps the best of which was the former Co-operative Bank building.   In the odd case where there was a modern building there was often an artistic element such as this funny little horse fountain. The street led down to a square in front of the strangely red Franciscan church and at last there were lots of people around.  We crossed the famous triple bridge and meandered around the old city centre before heading for the funicular ride up the hill to the old castle. The old castle was rebuilt following an earlier earthquake in 1511, but has been extensively reconstructed in recent years to house a number of museums.  The views from the battlements across the red tiled rooves of the city centre were good, and by now the weather was clear enough for us to see the snowcapped Julian Alps in the distance.  After exploring all the parts which we could see without having to remortgage the house to pay the entrance fee, we went to the lovely modern cafe to indulge in coffee and a large and very splendid piece of cake.Having descended back to ground level we crossed the market place to the Dragon Bridge, a bridge decorated by dragons on the pillars at each end.  Tradition has it that their tails wag when a virgin passes by.  There is evidence in the shinyness of brass of the tails where many a young lass has tried to make the tails wag in vain.  Along the riverbank are lots of nice looking cafes and restaurants and many unusual modern sculptures.  We followed the river round to Congress Square, a huge area we had seen from the castle, to find that close up it was a little disappointing. However at one end, which we had not been able to see from above, is the Philharmonic Hall, a very handsome building, and the University buildings which were also very splendid.  Also in the park here was a copy of the golden statue dating from when Ljubljana had been the Roman Emona.  Cue the Bachelors (showing my age).Rain was threatening again so we wandered along the almost deserted shopping streets towards the bus stop for the ride home.  We were puzzled as to why our bus, which we thought was due, was not showing on the boards.  It was the correct stop, indicating the numbers of our three buses as well as many others, the timetable showed it was due.  Then it dawned on us again.  Bank Holiday Monday.  The buses were runing a different timetable and instead of the three buses one every ten minutes, two of the services were not running at all while the other was reduced to a half hourly service.  What a pity the helpful lad at the hotel/campsite reception had not thought to tell us that!Next morning dawned much finer so we packed up and headed off for the seaside.  There followed a week of hot sunshine, about which, more later.