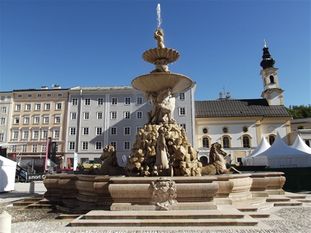 The campsite, Vierthaler, couldn't have been more picturesque. It was in a meadow beside the fast-flowing River Salzach, the reception building was a typically picturesque Austrian chalet with a flowering cherry tree in full bloom outside, and it was overlooked by a magnificent snow-capped mountain.  The sun was shining and the sky was a deep blue.  So why was I getting bad vibes?  Well, for a start, there was no-one else there.  In fact the site looked as if nobody had stayed there since last summer.  The grass was a little too long, the picnic tables and benches looked as if they hadn’t been used for months, and there were no markings or numbers to indicate where the pitches were.  It was a bit like a ghost town. However, the owner appeared and was very friendly and welcoming.  She said we could pitch anywhere we liked. Then another caravan arrived, which was reassuring, followed a while later by a camper van.  So we started going through the routine of connecting the electricity, getting water and unpacking all the things we needed.  But I was still uneasy.  Despite the sunshine it was cold, and felt very rustic and isolated.  The toilet block was small and while perfectly clean and fairly modern, it was not only unheated but only semi-enclosed, meaning that any sort of ablutions would be a test of stamina!  After a discussion we decided to move on the next day to somewhere more comfortable.  It was a shame, because in high summer it would be an idyllic place, but at our age we need our comforts!Next morning we moved nearer to Salzburg, to Camping Panorama Stadtblick (which means "town view".) It immediately felt right.  We had a nice big pitch with a splendid view over the rooftops of Salzburg, with the castle on its hill, and the distant snowy mountains. There were a number of other campers, the shower block was luxurious (and heated!) and it was a 5-minute walk through a pretty meadow and across a stream to a main road with a bus stop.  Having bought Salzburg Cards at reception we were ready to do some serious sightseeing.   Fifty years ago, aged 19, and inspired by seeing The Sound of Music at the cinema, we hitch-hiked to Austria, staying in youth hostels.  We were pleased to see it hadn’t really changed much –almost all the well-known monuments were as we remembered them, although the Residenzplatz was full of trucks and marquees in readiness for the Salzburg Marathon in two days’ time.  First we ate lunch sitting in the sunny garden of a small restaurant – wiener schnitzel and beer, naturally! Then we took the funicular up to the castle for some terrific views from the ramparts. When we came back down we went into the Stiftskirche cemetery and catacombs, a pretty oasis of quiet.  By this time we needed a sit-down so found a pavement cafe where I had Sachertorte and John had Mozart torte.  Unoriginal, but when in Rome!  We wandered through narrow streets full of shops selling dirndl dresses and Mozart memorabilia, crossed the river by a pedestrian bridge adorned with thousands of padlocks, and made our way to the beautiful Mirabell Gardens before getting the bus back. We were hot and tired, so what better way to relax than sitting outside the camp site bar with a cold beer.  The site was filling up and we talked to a Swiss couple who were on their way to Hungary.  It’s always interesting comparing notes with other travellers. Next day was warm and sunny again so we got a bus to Schloss Hellbrunn, just outside the town. This was built in the 17th century as a summer palace by the prince-archbishop Markus Sittikus, and is famous for its trick fountains or “wasserspiele.”  We thoroughly enjoyed it, and squealed just as loudly when we got sprayed with water as we did when we were teenagers!  Inside the palace there are frescoed rooms and Markus Sittikus’ collection of weird and wonderful things, including a stuffed unicorn (yes, they ARE real!!) Back in Salzburg we searched for the Sternbrau beer garden we’d been to back in ’67.  It was still there, just off Getreidegasse, though somewhat refurbished and modernised.  However the waitresses still wear dirndl, the tables are shaded by chestnut trees and the beer comes in large tankards.  We had an interesting type of wurst which was white and came with sweet mustard and a giant pretzel – delicious.We just had a few things left to see – Mozart’s house, the famous Horse Fountain and the Museum of Modern Art.  This, like the castle, is high up on the Monchsberg and is reached by another funicular. I normally enjoy art galleries but found this one disappointing.  It has a smart restaurant with fantastic views of the city, but we much preferred the old Cafe Winkler which was on this site when we first came to Salzburg, and was demolished to build the art gallery. After two fantastic days the weather changed, it poured with rain so we spent a useful day in the caravan catching up with housekeeping tasks and generally relaxing.  The wonderful view of the snow-capped mountains that we had from our pitch completely disappeared behind low cloud and persistent drizzle.  Our plan had been to move on to Zagreb, but the forecast was rainy there too, so we decided to head to Ljubljana instead.  We were sorry to leave Panorama Stadtblick, it had been so pleasant, but there were many places still to see.