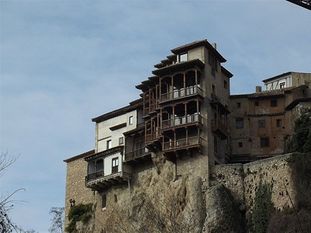 We arrived at Kiko Park Rural to find only two other units there, and they left next morning to leave us on our own! It had been similar last time we were here, probably because outside of high season the nights get very cold here.  Nevertheless it is a beautiful spot, set in a deserted village above a large reservoir.  Our aim in coming up onto the central La Mancha plain was to see the city of Cuenca, which we had heard praised so often, and also to visit some of the places where Laurie Lee had been posted in the civil war.It was 70 miles to Cuenca, but with the clear smooth Spanish by-roads the journey was a quick one, passing first through acres of vineyards, then small cornfields and almond groves just bursting into a mass of pink flowers.  Cuenca is set in the fork of the junction of the rivers Jucar and Huecar, which at this point run in deep gorges.  The city is built on top of the gorge, with the buildings seeming to form a continuation of the cliff face and at times overhanging the steep drop to the rivers below, thus giving the name 'Hanging Houses'.  We drove up the Huecar gorge (the Hoz del Huecar) to get the views from below, then circled the new city and started the climb into the old city.  We spotted a car park half way up the hill and turned into it, to find that it had been built by hollowing out and expanding the caves in the rock.  It was quite a strange feeling, driving down a long tunnel to find a space.  We then took the lift up to the 7th floor, which was street level for the old town and, came out by an old clock tower, the Mangana, with splendid views down to the new part of the city.  However this level, although the same height as the Cathedral square, was on a separate hill, and we had to walk down a little way before the final climb.  At the entrance to the square, which was through an old arch, was the tourist information office, who provided us with a map of the old town.  Then just inside the archway was a nice bar, ready to provide us with a morning coffee.

The cathedral was, to us, very un- Spanish in its architecture. The interior was very Gothic, with tall aisles much like an English cathedral.  However it was furnished in Spanish style, making quite sure that the plebs in the congregation knew their place by keeping the choir and the clergy in separate areas behind huge wrought-iron screens almost like cages.  There had been a major fire and collapse of a tower in the early 20th century, and presumably that is what destroyed many of the stained glass windows, as they had been replaced by modern ones, not nearly as nice and in many ways quite inappropriate.

Behind the cathedral was the Museo de Arte Abstracto, the Modern Art Gallery, which contained the usual mish mash of what, to me, are unintelligible splodges of paint and other materials.  However there were a number of works by Eusebio Sempere which we enjoyed, and we were even able to buy a couple of remarkably cheap prints in the gallery shop.  The real reason for visiting the gallery though is because it is in one of the best of the ‘hanging houses’ with wooden balconies right over the high cliff edge, providing superb views.  Within the old house  the gallery is, like so many in Spain, ultra modern and beautifully designed.We walked down one of the streets to the Puente San Pablo, an iron bridge over the gorge, and then up to the Convento de San Pablo, an old convent which is now a Parador.  Back in the old town we walked up various little alleyways to the Arco Del Bezudo, the gateway at the top of the town, where there was a row of restaurants, all very busy as it was the weekend.  In spite of the cold (it was only 5 degrees up here on the central Spanish plain) the outdoor tables were full.  We found a small table inside one of them and had the menu del dia.   A starter of green lentils with spicy chorizo type sausages served in a bowl ,soup style.  Real peasant food and warming on a cold day. Then Lesley had a swordfish steak with chips and salad while I had lamb chops, served as a rack of lamb, a portion which in England would class as a Sunday roast and be carved onto four plates!  A nice slice of cheesecake followed, and the meal was washed down with a beer and bread on the side.  Total cost? €13.50 a head, that’s under £10 for a three course meal with drink.  Then it was back to the caves to retrieve the car, where parking cost almost as much as the meal, and back to camp.

The following day we set off for a little village called Tarazona de la Mancha, which is where Laurie Lee was first billeted when he finished his training at Albacete.  He described it as a grey and dreary place.  The church in the centre of town had been stripped bare to be used as an assembly room.  What we found was a very attractive town square with the church in one corner, fully restored and refurnished.  The chapel on the hill, where he slept on the altar, was still there, again restored, but closed up so we could not see that famous altar.

What the town did lack though, being a Sunday morning, was a cup of coffee, so we had to drive on a further 20 miles to Albacete in search of caffeine.  This is where Laurie Lee did his training and where he was imprisoned as a possible spy and very nearly executed.   We could see no indication of where the barracks were, but did find a preserved steam locomotive which for the sake of the story we will describe as one similar to the loco which pulled Laurie’s train into Albacete station in 1937.  Albacete is a modern sprawling city but it does have a few nice old streets in the centre near the Cathedral and the Calle Mayor.  We found a coffee shop open and rushed in to a poor cuppa with poor service.  Had we had more patience we would have found much better ones a few streets away, including a Valor chocolate house.  I suppose it was fate that I should have a coffee and a Slimming World Hi-Fi bar instead of a cup of very rich hot chocolate and churros to dip in it. Just off the Calle Major we found a lovely old arcade, the Pasaje de Lodares, reminiscent of the Leeds Victoria quarter.

Pictures for this blog