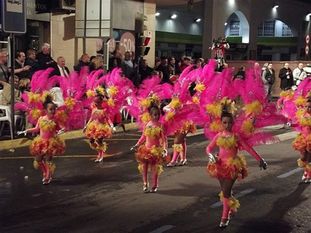 Archaeologists have reconstructed a part of the site to show what it would have been like. The site is set in what is now a wilderness area, in fact only twenty miles or so from the valley where the Spaghetti Westerns were filmed.  There is a very nicely presented museum with three staff, but as the whole thing is in the middle of nowhere, and poorly signposted, I suspect we were the first visitors since 2013.  Notably lacking was any sort of a café, so as it was lunch time we headed for the nearest small town, Alhama de Almeria.  This was not exactly on the tourist trail, and eating places were as rare as hens’ teeth (although, strangely, there were a large number of banks!)   There were precisely two options, a pasteleria (a café that sells cakes – delicious but not really a meal) and an old bar, stuck in a time-warp, where all we could get was some very basic tapas (ham, cheese, crisps) and a beer.  Not really a meal either, so after we left the bar we went straight to a supermarket and bought a pack of donuts!! From here we drove up the valley to the Eastern Alpujarras, a much less visited part of the Sierra Nevada valley than the main western end.  The land here is mountainous and eroded into such weird shapes.  Like the coast below it was once a huge deposit of alluvial silt which has fossilised then become exposed and been eroded by wind and rain.  It is a land very rich in minerals and there has been a lot of mining over the centuries, both underground and, more recently, opencast.   But not enough to spoil the landscape of course, as it already looks like a huge opencast mine as a result of the work of nature!  The drive over the Sierra de Gador to get back to the coast was spectacular.For the rest of our time at Roquetas we did very little.  We had great fun watching the German contingent.  Roquetas is a very German site, and for some reason very popular with elderly German bikers.  There were a lot of motorhomes occupied by single German men, or ones whose wives kept out of sight, all of whom had a huge box trailer containing a very big bike, Harleys and Hondas, with the odd BMW or Ducatti.  Most of the time they would just stand around and talk about them, in their loud booming Germanic voices, but occasionally a few of them would pluck up courage and go out for a ride.  The guy opposite had a very smart bike, but it never moved in the ten days we were there.Also very prevalent at this site are cyclists.  In fact we felt the odd ones out!  There were two English caravans further up our lane and another in the next road, who all mounted their bikes every morning, in matching helmets and yellow hi viz jackets, to disappear for the day.  There are a lot of cycle routes around Roquetas and Aguadulce and of course the land is very flat. Eventually though it was time to move on.  Lesley was up to date with her washing and I had had enough of seeing old German men posing in their underwear in the shower block.  We had intended to move to Palomares, a little further along the coast near Mojacar, but I read on line that there was a big Mardi Gras parade in a town called Aguilas, a little further on, and there was a camp site close to the town.  I contacted them; they had a space, so here we are at Camping Bellavista.  They say they had space, they did, but that is only because we are all crammed in together!  We are on one of the few pitches where there is room for a car as well as a caravan.  Sadly behind the van, the other side of a wall, is a busy road.  But it is just for a few days for the carnival.  Sadly too the weather has changed.  A cold wind with heavy showers.  A pity, because this is a beautiful coast.  On our first afternoon we drove into Aguilas for a recce before the crowds.  During carnival week there is a holiday atmosphere in the town.  The two main streets are lined with seats for the parades (there are four of them on four separate evenings, all identical) and down on the harbour side, where the parades finish, there are stalls for all the usual hot and cold drinks and fast food.  That apart, the town has a couple of attractions.  On the hill in the centre is the Castillo of San Juan, and in the centre of town the Plaza Espagna is particularly nice, with a fountain in the centre depicting a goose being attacked by a snake (why??) and surrounded by elegant buildings.  There are a number of good beaches too.  But that afternoon it was all very closed, for in carnival week this is a night time town.