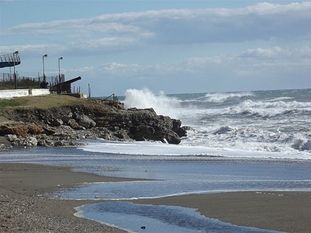 Barely had Helen left for snowy England before the weather here deteriorated too. A strong wind sprang up, making the awning creak and flap and the air feel much cooler.  The day after she left was not only windy, but there were dark clouds low over the hills.  We decided to go out for the day anyway, 20 miles up the coast to Almunecar. En route we stopped for coffee in La Herradura, a small and rather smart resort named for the horse-shoe shape of its bay.  The strong wind was shaking the palm trees and driving huge waves ashore, accompanied by spray – it was just like a stormy day in Seaford, only warmer!    We drove on to Almunecar, found a place to park and headed for the Tourist Office to get a map.  There we encountered a most unhelpful middle-aged lady who obviously didn't want to put herself out to encourage tourists to find their way around her town.  We’ve found tourist staff are usually of two kinds – the can’t be bothered, I’ve got a cushy job for life type, or the extremely eager and helpful ones, who are often younger.  However, armed with a map and our very out-of-date Lonely Planet guide we felt equal to the task.Almunecar was founded by the Phoenicians who gave it the interesting name of Sex.  When the Romans conquered it they called it Sexi Firmum Iulium, a gift to modern entrepreneurs who have opened businesses called The Sexi Bar, The Sexi Souvenir Shop etc.  We headed straight for The Sexi Castle.  Actually it’s called the Castillo de San Miguel, and was at the end of a very steep climb.   It’s yet another Roman/Moorish/Christian fortification, but it had very good audio-visual displays and a small museum.  There wasn’t a lot of the castle left in its original state, but from the ramparts there were splendid views of the town’s two beaches and the rocky promontory that separates them. Our main reason for visiting Almunecar was that Laurie Lee stayed here in 1935-6, although in his book, "As I walked out one midsummer morning", he calls the town Castillo.  While he was there he was caught up in the Spanish Civil War and was evacuated on a British warship, but returned to Spain later to fight against the Fascists with the International Brigades.  As the Fascists remained in power until the late 1970’s, and were inclined to take reprisals against their former opponents, Laurie Lee couldn’t reveal the true identity of “Castillo” until after the death of Franco.  The town has now put up a memorial in his memory and we went in search of it along the pleasant promenade.  While we were reading the inscription we met another couple of Laurie Lee fans, caravanners like ourselves, and had an interesting conversation about Spain past and present. Our next task was to find somewhere to have lunch, and a bar on the seafront provided a special deal – ten tapas for 5 euros.  That, plus a couple of beers, made an excellent and very cheap lunch!

Almunecar has a number of Roman ruins, including the remains of a large fish-salting “factory”, bizarrely situated in the middle of a semi-tropical botanical garden.  We also found a sizeable section of Roman aqueduct on the outskirts of the town.   Yet again we were impressed by the abundance and excellent preservation of Roman remains in Spain.For the next few days the weather continued windy and cool, with the occasional shower, although fortunately these were mostly at night.  The seafront at Torrox had taken a battering from the big waves – many of the wooden walkways on the beach were broken up and strewn all over the place, and the cafes had had to take their tables inside.  However, the sun still felt warm if you could find a sheltered spot out of the wind. Our next-door neighbours at the campsite, Torrox winter regulars, told us about some hot springs up in the mountains behind Velez Malaga, so one day we set off to find them.  It was still cool and windy but this meant the air was very clear, and the views as we climbed into the hills were spectacular.  Passing through a dramatic gap in the mountains, the Boquete de Zaffaraya, we emerged onto a strange, high plain entirely given over to vegetable growing – mainly cauliflowers at this time of year.  Just beyond the town of Alhama de Granada we followed signs to the “Arab Baths”. The Moors had built the baths over hot springs hundreds of years ago, and the original building is now preserved inside a large, modern spa hotel (closed for the winter, unfortunately.)  However, the hot water bubbles out of the ground adjacent to a cold mountain stream running alongside the hotel, and enterprising locals have built up low walls to form a series of shallow open-air pools.  These free therapeutic baths were full of people enjoying the steaming hot water, despite the fact that at this altitude (nearly 3,000 feet) the air temperature was a chilly 3 degrees!  As we drove back down towards the coast we watched the temperature rising the lower we got, until at sea level it was back to a comfortable 16 degrees.We spent the next couple of days quietly at the campsite, sitting in the awning which sheltered us from the wind and got lovely and warm in the sun.  From time to time John continued to wrestle with the computer, and I got loads of washing done – it was excellent drying weather!  We had another outing, to Salubrena, an old Moorish town along the coast dominated by an ancient castle on a hill.  We had expected it to be as interesting as Almunecar but were disappointed.  After climbing up a series of steep, narrow streets and flights of steps we reached the door of the castle only to see a sign – “Closed for restoration”!  There wasn’t really much else worth seeing, so we drove the short distance to the seafront for a coffee and a walk along the promenade.  This had suffered badly in the storms.  A large section had been undermined by the waves and collapsed.  Again, we were reminded of Seaford and last year’s damage at Splash Point!

On our way back from Salubrena we stopped off at Nerja again and this time were rewarded with the sight of a dozen or more of the stray cats who live near the steps down to the beach.  They were besieging some visitors who were trying to eat their lunch in peace.  Who could resist their hungry miaows and sad looks?! We had intended to move on from Torrox earlier, but the strong winds meant we couldn’t take the awning down without it blowing away, nor did we want to risk towing the caravan in such conditions.  Luckily towards the end of the week it began to calm down a bit and we were able to make preparations for leaving.  But first we made one more visit, to the “white village” of Competa nestling high in the mountains.  Not only is it a very pretty little village in a spectacular location, but it has a charity shop (Action for Animals) where we were able to donate a pile of jigsaws we’d finished and buy some replacements!  Despite blue skies and sunshine the temperature in Competa, at nearly 2,000 feet, was bitter.  The lady in the charity shop said it was the coldest she’d ever known it. Back in Torrox we took the awning down then sat in the sun to warm up.

Our next destination was Roquetas de Mar, on the coast just south of Almeria.  We’d not stayed on this stretch of coast before, although we’d driven along it on the way to Cabo de Gata. We didn’t know what to expect, and were prepared to move on if we didn’t like it.  More about Roquetas in our next instalment!