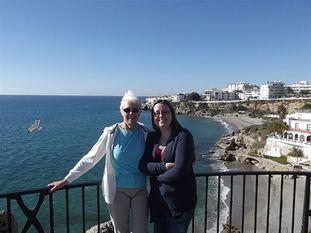 There was a mini bus service running from the city centre up to the Alhambra, so we decided to save our legs and joined the old folk and Japanese tourists for the short ride up the hill, reaching the Palace in time for our allotted entry.  We described the Alhambra in great detail in a previous blog, so I shan’t go to great lengths here.  Suffice it to say the Nazrid Palace is still as jaw droppingly beautiful as it ever was.  Helen was expecting wonders, but even she was amazed at how much there is there.  Here are some pictures to refresh the memories of those of you who have seen it and to whet the appetites of those who haven’t. Helen’s last day with us had to be a quiet one, after all that exercise in Granada.  She was supposed to be convalescing, after all.  After a lunch of bread and cheese we had a walk along the prom, stopping of course for ice creams and then for beers.  As this is a bit of a foodie episode, a few words about that British staple lunch, bread and cheese, or if you are in a pub, the Ploughman’s.  It is a concept unheard of in France and Spain, which is surprising being as the French Baguette and the Spanish Barra are the ideal vehicles for transporting cheese from plate to mouth.  No, sur le continent they eat cheese as one course of a meal, with a knife and fork.  Bread is to be eaten plain, unadorned, or scraped round a plate to soak up the oil and meat juices.  Bread can also be toasted and dressed with tomato or a slice of ham or Manchega, but bread with butter? Bread with cheese?  Bread with pickle?  What is pickle???  What a waste.  One of the joys of travel in France and Spain, for me, is eating crusty fresh bread with cheese, rounded off with bread and strawberry jam (or, on this trip, home made raspberry jam courtesy of our good friend Elisabeth).   And as for the cheese, the contrast between France and Spain is incredible.  France is famed for its cheese, soft, hard, ripe, mouldy, whatever.  Spain is famed for its Manchega.  Spain has hard cheese, very hard cheese, not so hard cheese, ripe cheese, new cheese, mature cheese, yellow rind, black rind, but they are all Manchega, made from ewe’s milk.   Very nice, but I like a soft smelly cheese, so have to rely on imports.  Shame it is so fattening.  I should amend my earlier comment from what a waste to what a waist!We took Helen back to the airport on Thursday and she left the warm sun of the Costa del Sol for the snow and ice of Gatwick.  It was great to see her, even if it was only for a few days.  I could talk at length about the Sino-Japanese noodle meal we had in the shopping centre on the way back from the airport, but that’s enough food for now!In the next blog:  a bit about Laurie Lee country, Almunecar & Salobrena, and also seeing people sitting in a hot pool in the mountains, during our second week in Torrox.