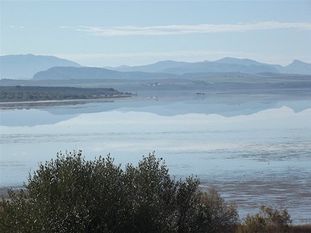 In the winter, inland Spain can get very cold, while the coast, particularly the Mediterranean coast, stays mild and pleasant. Unfortunately for us the Spain we enjoy most, and the places we want to see on this trip, are mainly inland.  So it is very much a case of watching the weather forecast and popping inland for a few days at a time when the forecast is good.  Last weekend was one of those times.  We headed north east towards Antequera, an old town with Roman and Moorish remains and more famously, the three largest Neolithic dolmens in Europe.  We wanted to visit the museum there, which we had missed last time, and Lesley was also keen to visit a donkey sanctuary she had heard about.  The campsite we chose was Sierrecilla, a comparatively new site which had good reviews and was listed as having a heated toilet block, a very important factor inland where even on warm days the nights get cold.  It is situated at the edge of a town called Humilladero, which ranks as one of the strangest places we have been to!The name Humilladero comes from the Latin, humility or humble.  The nearest translation to English is perhaps Calvary, the name given to a cross or pillar, usually, but not always, of religious origin.  They usually marked a place for prayer, but were sometimes used as a place of punishment, like the village stocks, and many of them date back to the times of the Visigoths.  One of the reference sources we often use, Andalucia.com, says of Humilladero:"Anyone interested in the Christian Reconquest will be fascinated to know that it was here that Infante Don Fernando of Aragon knelt, kissed the sword of San Fernando and swore that he would not cease until he had retaken Antequera from the Moors (which he did, in 1410, after a five-month siege). Legend has it that the Cruz del Humilladero monument, located at the entrance of the town, marks the place where the Infante Don Fernando received this historic sword. Another tale says how the Catholic kings stood to pray before the cross whilst on their way to the conquest of Granada". So we have a site with good reviews and a heated toilet block, a small town with a bit of history and a nice area with plenty to see.  Well, at least we had plenty to see.  The site was pleasant but very empty.  The toilet block had a heater, but it was on a timer and only in the washbasin area.  If you were going for a shower the heat did not go that far, and, even if it did, by the time you had got undressed the timer had switched it off.  To add insult to injury the washing up sinks, advertised as having hot and cold water, only had barely lukewarm water and that only after running the taps for twenty minutes.  It was a quiet site, well, for most of the time, anyway.  The lane up the side is a dead end, leading to a park area, with woods and picnic tables.  It was astonishing how much traffic it generated at certain times of day.  And the local shepherd, with a large flock of sheep and goats wearing bells, led them up and down the lane a dozen times a day.As for the Calvary, stone cross or whatever it was, not a trace could be found.  Locals knew nothing about it.  Was it a tale made up for the guide books?  The rest of the town seemed to have nothing of interest at all.  A good many one or two storey white houses, the odd shop, a new bus station and the usual huge area laid out with roads and street lights waiting for a development which might never come.  The latter had been occupied by a small band of travellers, travelling with old circus lorries, a number of ponies, and, unusually for travellers, English- made caravans.But enough of the downside.  The upside was good.  We visited Antequera again, had a coffee in the same little bar as three years ago and visited the museum.  This was set in an old palace which had been virtually gutted inside and an incredible structure built within.  It must have cost a fortune.  Given the state of the renovated museums, the first class road system, the number of new high speed train lines being built everywhere, it is no wonder Spain is bankrupt.  But during the course of Spain's history it has gone bankrupt a number of times and reneged on its debts even more, so it knows how to deal with it.  The museum contained mainly local relics, but given the length of Antequera’s history this was a huge sample.  Strangely there was very little Moorish stuff though.  However there were two big exhibitions of works by two local artists, Cristobal Toral and Jose Maria Fernandez.  About the latter I can tell you nothing other than he has a numbers of awards and scholarships named after him as well as a local college.  Cristobal Toral though was very interesting.  Born 1940, many of his paintings are quite Dali-esque and many feature suitcases.  Make of that what you will.We visited El Refugio del Burrito, the Donkey Sanctuary at Fuente de Piedra which was huge, 90 donkeys and mules in large paddocks, most rescued from appalling conditions but now well cared for.  The refuge gives riding therapy for children with special needs and is linked with the donkey sanctuary in Sidmouth UK.  They now run another sanctuary near Badajoz in the west of Spain with housing for 250 donkeys.

We then drove on towards the Laguna de Fuente de Piedra and called in at the visitor centre.  This is the largest lake in Andalucia and the second largest breeding ground for flamingos in Europe.  At this time of year there are only a few hundred of them, but by mid February there can be up to 16,000 breeding pairs, which must be an incredible sight.  In the afternoon we drove around the lake, stopping off at various viewpoints and hides.  The lake is well protected and it is impossible to get closer than a couple of hundred metres away, which protects the flamingos and also the 170 other species of bird that have been recorded here.  No, we are not twitchers, but we do enjoy seeing different birds, and enjoyed watching three large raptors jousting for position near one shore.  The closest identification I could get from my old bird book were ospreys, which have been recorded there.After that we drove over the hill to a little town called Osuna, the ancestral seat of the dukes of that name, which we had read about.  Another fascinating old hill town, with a huge church-cum-palace on the hill top and an ancient university building (one of the first in Spain) alongside.  It was a very steep and exhausting walk up to this, and disappointing when we got to the top to find that visits to the church, which is no longer a church, but to all intents and purposes is still a church, were by guided tour only.  Not knowing this we wandered in but were pounced upon by an old posh crone who might have been the Duquesa de Osuna and sent packing.Nevertheless the old town round the foot of the hill was very interesting, with lots of old and elaborate buildings.  Looking in a jewellers’ shop window we saw commemorative plates with a picture of the church/palace/fortress at the top of the hill and the cast of Game of Thrones superimposed.  It seems some episodes were filmed here in 2014, using both the hill and the bullring, bringing some income to the town which currently has the highest unemployment rate in the whole of the EU.  The irony of course is that the 550 locals who took parts as extras would never see the finished product as they cannot afford Sky TV.On another trip out we headed past Antequera to Archidona, another old hill town we had read about, famous for its octagonal Plaza Mayor and its hilltop chapel.  Not having a street map we went by guess work and parked in an empty space on the main street and walked on, looking for the centre and the Plaza Ochavada.  After a long walk up the hill the town started to thin, so we turned to look at the statue of Blas Infante, a local hero who was a strong upholder of democracy and local independence who of course was a thorn in Franco’s side.  Public execution called for.  We then overheard another pair of ladies asking for directions.  Following them we got back to the car, turned right, and there we were, less than 20 yards from where we had parked.  The square (or should I say Octagon?) was very reminiscent of the square (or should I say Oval?) at Lucca in Italy, Piazza del Anfiteatro, which had been built within the confines of a small Roman amphitheatre.  Sadly it was marred slightly where part of the pavement collapsed last month as a result of a burst water pipe.  It seems an old lady was stood there at the time of the collapse, but I don’t know her fate. We called for a coffee at the improbably named, and deserted, Elvis Bar, then returned to the car for the drive up to the chapel at the top of the hill.  Like most towns in Andalucia the hill was crested by a castle, or Alcazabar, with a mosque.  And unlike most towns in Andalucia the mosque has been converted into a church dedicated to one of the many guises of the Virgin Mary, La Virgen de Gracia, rather than being destroyed completely.  The drive up was hairy, a well maintained but mostly single track road with a vertiginous drop on one side and very tight hairpins.  We passed a number of people walking up, most of them pretty old. At the top we parked near the sanctuary (we had to, the road stopped) and had a look round.  Unfortunately it has become very touristy with a shop full of religious tackery, but the little chapel was very popular with people popping in to say a few prayers and get their breath back before walking down again. After a sticky ten minutes trying to do a three (or was it twelve) point turn on the narrow road without hitting the bollards and other parked cars behind or plummeting over the edge, we drove back down to the next bend, where there was a better parking area to walk around the ruins of the castle.  The views were stupendous.So then it was time to move on.  In spite of everything we had an enjoyable few days at Humilladero, but the coast was calling.  We have now moved down to a complete contrast to all the sites we have stayed on in Spain.  It is run by an English couple along the lines of a Caravan Club CL (Certified Location).  Just four or maybe five pitches, basic but adequate and clean facilities and handy for a run down to the coast or inland to more pueblos blancos.  More of that next time.