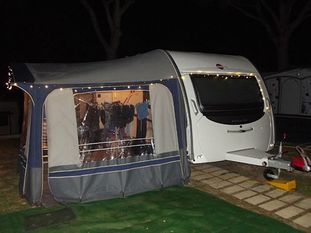 The beaches are huge and deserted, although in summer they’re a magnet for surfers.  Cape Trafalgar is nearby and at night we can see the beam of its lighthouse sweeping over the campsite.    There’s a supermarket and a restaurant, and on Christmas Day they laid on lunch for 46 people, with crackers and a visit from Santa (one of the regular campers – many of them return year after year). It was a very different sort of Christmas dinner, with not a sprout or turkey in sight!  There were lots of tapas-type starters, then deep-fried fish, followed by the main course, a choice of pigs’ cheeks or tuna steaks (this coast is one of the main centres of tuna fishing).  And finally, plates of delicious little sweets and cakes.  All washed down with plenty of wine of course! We’ve spent our time here so far relaxing, sitting in the sun, and making an occasional foray to a beach.  There’s a friendly donkey in a field nearby, which makes up for the lack of cats here (there were several at El Puerto.)The temperatures are quite cool in the early morning and evening, and we sometimes need to put the heating on at night, but from about 10.30 to 4.30 it’s warm enough for shorts and tee shirts. One of the nicest things about winter in warmer climes is the flowers, some of which seem to go on blooming all year.  We’ve seen bougainvillea, hibiscus, aloe, lantana, angel’s trumpet, and – appropriately for Christmas – poinsettia growing outdoors to a height of six or seven feet.  There are trees heavy with ripe oranges, and the usual huge, spiky cactuses. There are plenty of butterflies too, and the pine trees are full of small songbirds (and, at night, owls!)  John now takes over as Lesley has gone off for a walk to enjoy the sun, find some flowers and bring back some sea shells, while I sit mouldering having picked up the back end of Lesley’s bug.  Fortunately it is not as bad as hers was, and I won’t have to suffer it through the cold wet rain of France and northern Spain, so a day in the caravan should sort it.Let’s finish on a high note.  Yesterday was my birthday.  For the first time since childhood I wore shorts on my birthday; just for the morning though.  Afternoon was party time.  Marie, one of the Pinar regulars, was also celebrating her birthday and she invited us down to her do at a strange little bar a couple of miles away.  As Lesley said earlier this area is an old hippy hangout, and this bar was certainly a relic from then.  Run by a hippy dippy couple with a passion for music, the bar was virtually open air, the walls, floors, seats and tables all festooned with blankets, posters on the walls, including the iconic portrait of Che Guevara, an open weave rush ceiling, toilet in a cardboard outhouse, a tiny kitchen and a beer pump behind a serving hatch. Entertainment was to be provided by the Pinar Camping 'band’, a group of winter regulars of varying talents who started by “jamming” together for their own pleasure, but now put on the occasional concerts in bars in nearby towns.  To be honest we did not know what to expect but were prepared for the worst and I was already making up excuses before we got there, ready to make an early departure after a polite length of time.  Well, what a pleasant surprise.  The company was good and friendly, the beer went down well (it would have gone down even better if the car hadn’t been parked outside) and out of that tiny kitchen Mrs HippyDippy kept sending plate after plate of food.  Tomatoes in vinaigrette, grilled sardines, calamari, salad, fish croquettes, battered fish fillets, battered whole fish, chips, bread, cakes.  All delicious.  And when the band struck up they were a pleasant surprise. Don’t give up the day job, boys, and steer clear of Leonard Cohen, but otherwise pretty capable.  One excellent guitar player had a good repertoire of old Blues songs which we particularly enjoyed.And talk about a small world.  Years ago, when we lived in Roundhay and used to go on Canvas or Eurocamp holidays, wherever we went people, on hearing we were from Roundhay, would say “don’t suppose you know Jane Fox do you?”.  Well now Roundhay Jane has been replaced by Retired Yorkshire Bank recent new motor homer Doug Lowther.  We met Doug out of the blue at Lake Iseo a couple of years ago when they were on their first motor home trip.  Yesterday we were chatting to a couple from Scarborough, now living in Spain, who, on hearing the Yorkshire Bank mentioned asked if we knew one of their good friends Doug Lowther.  And on the subject of Yorkshire Bank, we ex Yorkshire Bankers of a certain age have a thing about National Australia Bank, the Oz bank that took over YB (and Clydesdale) and tried to make it into something it wasn’t, wrecking it in the process.  Well one of our neighbours here, Adam, worked for National Australia and came to London as part of a team briefed with extricating NAB from the mess they made.  Adam now works as a self employed finance broker for the Film Industry, jumping between London and New York but living most of his time in a motor home travelling Europe while collecting rent on his two apartments.So that’s your lot for this year.  We are staying here at Pinar at least until after January 6, the Three Kings Festival which to Spanish children is more important than Christmas.  We’ll report on that next time.