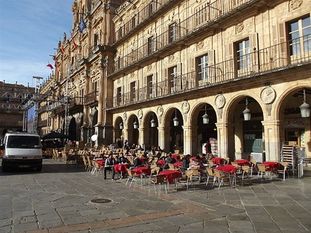 Wednesday was time to move on, so we continued our journey south to El Puerto de Santa Maria, on the coast on the bay of Cadiz. Here we are having a few days relaxation before moving on to our Christmas stop, Pinar San Jose near Vejer.  El Puerto is one corner of the sherry triangle, the other corners being Jerez and Sanlucar de Barrameda.  This tight little area, 25km each side, is the only area allowed to call its fortified wines Sherry.  We had an excellent visit to the Osborne Bodega last time we were here.  This time we hope to visit one of the Manzanilla Bodegas at Sanlucar, although I know before we go it will not be as good a visit for me.  The Osborne Bodega is an easy walk from the camp site, while Sanlucar is a 20m drive!  Still, we will be able to sample a few and select a couple of bottles for our Christmas tipple.On a down note, all that cold weather last week has had its effect on Lesley.  She has developed an awful chesty cough and cold and is properly down in the dumps.  No doubt she will pass it on to me as a Christmas present.This will probably be our last good online session before Christmas, so we wish all our readers a very happy festive season.