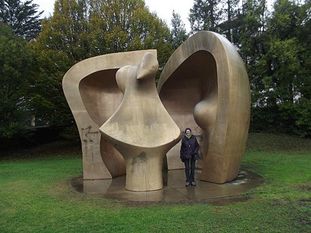 Gernika.  A moving tale.Some 90 miles along the northern coast of Spain, not far from Bilbao, lies the little town of Guernica, or Gernika as it is known in Basque.  The area was originally settled 15,000 years ago in the Palaeolithic period, as cave paintings in the nearby Santimamine caves testify.  The area was isolated and the unique Basque language was gradually created.  The abundance of fish and seafood meant that during the Neolithic and early Iron Age periods fishing as well as farming became important.  By the second century BC the Basques controlled all the important land and sea communications and built forts, one of which, Kosnoaga, is on the site of present day Gernika.  When the Romans occupied Spain the Basque country was never really conquered, but Roman settlements were established, the remains of one of which, Forua, can still be seen just north of Gernika.  Modern Gernika was founded by Count Don Tello on April 28 1366, as a separate village from its neighbour, Lomo.  Over the centuries it grew and prospered, amalgamated with Lomo and by the 20thCentury it was a busy industrial town of 5,000 souls.  It had become a centre of Basque culture and of law making.  It was the site of the most important of the seven sacred oak trees under which the Basques met and formed their laws in democratic fashion.