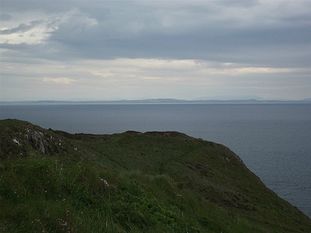 After the storm on Sunday night and the miserable weather on Monday we were expecting the worst of our ferry crossing. As it happened it was smooth as a millpond.  We arrived at Cairnryan on time and drove round the loch, through Stranraer, to the site at Low Glengyre Farm, where we received another warm welcome from Claire and the kids.  We had decided on the journey out that this area deserved a longer stay, but tonight we reserved judgement until the following morning.  When the weather is good this is a lovely part of the world, but so often it is spoilt by mist or rain and wind.Wednesday morning was fine, so we decided to stop another night and revisit the Mull of Galloway, an area we had not seen for nearly 40 years.  Driving down the back roads from Leswalt to Portpatrick a deer ran across the road in front of us.  I slowed to a halt in case there were more, but it was on its own.  It was a lovely sight, the first time we have seen a deer crossing the road.  We have often seen them in the woods, and we know of people who have been unfortunate enough to hit them, but this was a first for us. We continued on to Portpatrick in time for morning coffee (of course). This is an old port, once the departure point for the Ireland ferries 200 years ago.  When the ferries moved to Loch Ryan the port died and is now a pretty little harbour for pleasure boats, a lifeboat and a few fishing boats.  The harbour is lined with traditional Scottish buildings, mostly rather grey but with some colour.   Amongst the rocks around the harbour were lots of wild flowers, particularly thrift, and on one of the small cliff faces was a memorial to the 133 men and women who lost their lives when the ferry Princess Victoria sank in January 1953.  Princess Victoria was an early Roll on Roll off ferry and the main cause of its sinking was water coming in the car deck doors and flooding the car deck, an occurrence which of course would be repeated 54 years later with the Herald of Free Enterprise.  The memorial is a rather disturbing bronze of a pair of bodiless arms clinging to a beam. We drove on then to Logan Botanic Garden, an outpost of the Royal Botanic Garden of Edinburgh.   Logan benefits from the influence of the Gulf Stream and is thus able to grow and propagate many exotic plants, with particular emphasis on plants of the New World.  Areas of the garden are set out like patches of a far off world, with an Australian Eucalyptus forest, a South American garden, a Central American area, as well as more formal walled gardens with pools and fountains.  Parts of the cult film "Wicker Man" were filmed here. There was also a nice bistro for lunch.After lunch we went on to the tip of the Mull of Galloway, a wild windswept promontory and lighthouse reached by a single- track road.  From here on a clear day the views extend west to the Ards Peninsular in Ireland, south to the Isle of Man, south-east to the Lake District, and east to Burrow Head in Galloway. The wind was strong and the waves were lashing the rocks below.  There is a small RSPB cabin here which we visited and saw their spy cameras on a few nests.  Seabirds are very late nesting this year, after the poor spring, and many which would by now be feeding chicks had not even laid their eggs. Then it was back to the caravan to pack up for our long journey home the following day.We returned home via Leeds and Oxford, the way we had come north, visiting Mike & Nicole, then Helen in her new house at Benson, then to the jungle that was our garden in Seaford.   It had been a good trip, a nice change to tour in an English speaking area and to visit some old haunts.  However we did find it far more expensive than touring off season abroad.