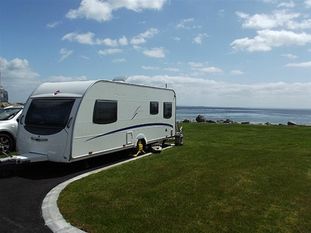 On Wednesday it was time to move on again, this time back north to Galway. On the way we stopped at the pretty little village of Ballyvaughan, on the south shore of Galway Bay, with its lovely old castle and an even lovelier coffee shop with home made cakes.  Unusually for a village there was a good car park with space enough for a caravan. Galway is a rather spread out town and our route took us round the ring road and plenty of modern office blocks to the west end of town, where the resort of Salthill lies on the north shore of the bay.  Here was our most expensive site of the week, €30 per night plus €1 for a shower and even €0.50 for warm water for washing up.  The price was compensated for by the pitch, right on the Bay shore, and the nearby Joyce's supermarket, the best we had seen in Ireland with a very large and quite upmarket selection of food.In the early evening we walked a little way down the promenade towards Galway and came across an arena with a high diving board, crowded with kids jumping into the bay, and a marked swimming course stretching 2 kilometres along the shore.  There were plenty of wetsuited people doing the swim.  In fact we were impressed by the overall fitness of the Irish people we had seen, with lots of joggers and power-walkers out most evenings.  The promenade here is a well known local walking and jogging circuit.  At two miles long it is the longest promenade in Ireland, and the custom is that when one reaches the Salthill end one kicks the wall (just past our caravan) then turns back.  There was a steady stream of kickers all the time we were there.Next morning we drove into Galway, expecting to find a lovely old town.  Yes, there were some nice old parts, some prettily decorated shops and pubs, a bit of Norman wall preserved inside a shopping mall and the remains of the old port which was said to have been visited by Christopher Columbus, but the overall impression was of a slightly run down, grey and very pedestrian- unfriendly city.  The good parts we did see though balanced the overall disappointment.  The river Corrib running through the centre had some nice walks along its banks and the salmon weir was impressive.  We saw no salmon leaping, but we did see one of the many fishermen there catch a fine specimen.   We also learned some interesting facts.  There are a couple of old castles in the city centre, one in scaffolding and one converted to a bank.  The latter, Lynch’s Castle was the home of James Lynch, a hard-line mayor who at the end of the 15th century had brought a measure of peace and prosperity to the city with a zero tolerance policy against criminals.  In 1493 his son got into a fight and killed a Spanish sailor.  Because he was the mayor’s son no-one would try him, so Lynch tried him himself and sentenced him to death.  No-one would act as hangman, so Lynch hung his own son.  It is said that this is the origin of the word lynch, to hang.Another interesting fact is that when Christopher Columbus came here in 1477, he worshipped in St Nicholas Church and asked for directions to get to America.  In fact Galway has always played an important part in the history of Ireland, as testified by the many famous visitors who have been granted freedom of the city, including John F Kennedy, Ronald Reagan, Hilary Clinton and Pope John Paul II. In the afternoon we drove west into the hills of Connemara.  This was wild boggy country, hills and lakes, peat fields and general wilderness.  It is the sort of area where you could drive for hours without seeing a soul.  The scenery was spectacular and the area is on our list for another visit sometime as there is so much to explore.  Time was pressing though and we were due back in the north by Saturday, so next day we upped camp and drove on to Mullingar on Lough Ennill, bang in the centre of Ireland for an overnight stop.  Here the scenery was quite different.  The wild hills of the west had given way to a more pastoral scene, with big dairy farms and gentle hills.  Quite near the site was Belvedere House, with its wonderful gardens, so we decided to pay a visit.  We were a bit taken aback by the crowds heading there, particularly the number of young people, until we found that Ireland’s number one festival was taking place in the grounds that weekend.  It was a bit like a mini Glastonbury, but at least the stewards recognised that we were visiting the house and gardens, not the festival, and guided us through the throng to the visitors’ car park.  Admission was half price today, as part of the park was closed for the festival.  That suited us fine as all we wanted to see was still open.  There are some lovely gardens and woodlands and a large Georgian house.   Of particular interest was the large folly, looking like a ruined abbey.  The tale has it that the house was owned by two brothers who fell out.  One left and built a larger house nearby, with its back to Belvedere, spoiling the view.  So the first brother built this huge folly, known as the Jealous Wall, to block the view of the new house.The house is now owned by West Meath County Council, but its last owner, Colonel Howard Charles-Bury led an expedition to Everest in 1921.  The party, dressed in Donegal Tweed, got to within 2,000 ft of the summit and brought back the first photos of the mountain, as well as a bear cub which lived at Belvedere for a number of years.

The town of Mullingar is an ordinary market town, with a supermarket and a McDonalds for a brief spot of WiFi.  It has a few claims to fame.  James Joyce lived here for a while and some scenes in Ulysses are set here.  It was also the home of that great Irish singer Joe Dolan, who had several hits in the 60’s, and was one of Ireland’s biggest international stars for some years.   There is a statue of Joe in the town centre.  More recently Niall Horan, who sings with "One Direction", hails from Mullingar.