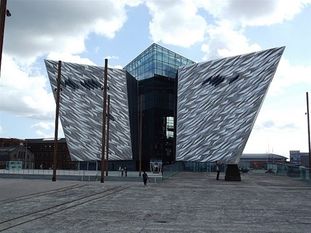 It is many years since we took the car ferry to Northern Ireland. In these non eco-friendly days it is cheaper to take a budget flight and hire a car than to use British rip-off ferries.  Last time we were here we took the ferry from Stranraer, which used to be a busy harbour with a busy rail interchange for foot passengers to Ireland.  Now the port is virtually deserted and the sad station stands in the middle of nowhere, a couple of miles from the town and over ten miles from the port it serves.  The boats now sail from Cairnryan, where there are two separate and independent ports, one for P&O Ferries and one for Stena Line.  The Stena Line terminal is a flashy new building with lots of seats for the thousands of passengers who can no longer arrive other than on a coach or by car, with a tiny coffee bar serving paper cups of flavourless coffee and stale cookies.  While we sat there enjoying this gourmet experience two coach loads of Japanese tourists arrived.  There was a young mum with her toddler minding her own business at one side of the terminal and the Japanese descended on her like a swarm of bees, cameras flashing constantly.  They all had to have their photos taken with this poor little kid.  Had they never seen a Western child before?Parked next to us in the line for the ferry was a huge truck loaded with hay.  We thought this rather odd, until we heard the Irish news on the radio a few days later.  It seems the cold wet spring has delayed the growth of grass in the Irish meadows and the cattle are starving.  The Irish government had arranged for millions of tons of hay, straw and fodder to be shipped over to avoid a disaster.   Presumably the potential disaster to the meat industry had been averted last year by the addition of horse meat, but they can't get away with it this year!The ferry trip was uneventful, but for the usual problem with all modern ferries, in that there is nowhere to sit other than in a bar or restaurant.  This means that one has to buy expensive food or drink one was not intending to purchase and, if one is a bit queasy, one has to sit and smell other people’s food and drink.  Fortunately the high speed ferry now takes just over two hours, the last half hour being a gentle cruise up Belfast Lough.  We were straight off the ferry, round the Belfast ring road and down to Lisburn within 40 minutes of landing.  The caravan fitted nicely onto Helen’s driveway and when we plugged the electric in believe it or not it worked fine. I subsequently found a loose connection in one of the external plugs and since then, touch wood, there has been no problem.It was good to see Helen again after so long and even better to see how well she was despite her illness.  There was a lot of chat to catch up on and the two ladies nattered away while I caught up with my internet forums and crosswords.  Next day we went down into Lisburn for a lunch at the new "Island" civic centre, followed by some shopping, then on Thursday we met up with Richard, one of Helen’s nephews, and his wife Carol, for lunch in Belfast before driving to Belfast Docks to see the new Titanic Museum.  This is in the old Harland & Wolfe shipyard where Titanic was originally built, and is an ultramodern structure meant to be depicting the prow of the great ship.  The dockyard itself was filled in long ago, but has now been marked out with the outline of the boat’s framework to give an idea of the size of it. Inside the main building are the usual collection of shops and cafes (some serving very tasty looking fare) and an award winning museum depicting the construction of and life on the Titanic. It is interesting to think that most museums and monuments celebrate success, but this one is unique in that it is celebrating one of the world’s greatest failures. There was not time for a full visit, so we will no doubt be back there again.