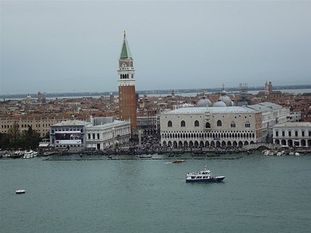 At this stage in our journey an explanation of our proposed future route is in order. From late September onwards campsites start closing for the winter, as temperatures, and demand, start falling.  The favoured destination of most winter caravanners and motorhomers is Spain, specifically the coast from Valencia southwards, because a) it's warm, and b) there are lots of campsites which stay open and cater for all the Northern European "snowbirds" who flock there. But between Croatia and Spain the campsites which stay open into October are few and far between, so our itinerary and timetable has to take this into consideration.  Much as we’d have loved to stay in the warm Dalmatian sunshine we knew we had to start heading west.To get from Croatia to Northern Italy involves going through Slovenia, where the most-visited attraction is Lake Bled.  The campsite there stays open until mid-October, so that’s where we headed.  Slovenia has been described as Europe in miniature.  It’s got a small stretch of coast on the Adriatic, fertile plains, lakes and forests, and snow-capped mountains (the Julian Alps.)  What it doesn’t have is guaranteed good weather, and as we drove towards Lake Bled the rain obscured the lovely view we should have had of the mountains.  We chose a reasonably dry pitch (there were quite a few muddy puddles) and ate our lunch.  In a brief dry spell afterwards we walked down to the lake, which is described in the guide-books as “picture-postcard perfect”.  Even on a grey day it was very pretty – the water is a deep blue-green and there’s a small island topped by an onion-domed church, the whole ensemble being overlooked by an old castle on a hill.

The rain continued for the rest of the day, with thunder and lightning for good measure, and the puddles around the campsite grew deeper.  We looked at the weather forecast on the internet and it seemed that all of Central Europe, Northern Italy and Northern Croatia were going to be wet for the next several days.  But against all the odds we woke next morning to blue skies.  We walked down to the lake, intending to take some photos while the sun was out, and ended walking round its entire circumference, about 6 km!  The water was crystal-clear and full of trout.  Boatmen were busy ferrying visitors over to the island in the traditional gondola-like boats called platnjas.  Not far from the campsite we passed Vila Bled, now a luxury hotel but originally built as the holiday home of the Yugoslav royal family. After the war it was taken over by Marshall Tito, where he entertained world leaders such as Khrushchev and Indira Gandhi.  About halfway round the lake we came to Bled town, a fashionable spa resort in the 19th century, now somewhat marred by ugly modern hotels.  Further on we came to a lido area with facilities for swimming and sunbathing, and just before returning to the campsite we passed an enormous rowing centre.  The lake was still marked out in lanes from the European Rowing Championships which had been held here a few weeks previously.