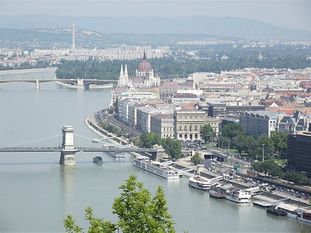 According to our satnav the journey to Karlovac in  Croatia would take just over four hours.  In fact it took two hours longer than that.  First there was a long hold-up on the motorway south of Budapest due to an accident.  It was interesting to see how many drivers tried to beat the jam by whizzing down the hard shoulder, impeding the passage of emergency vehicles!  We finally got past the hold-up and drove on past Lake Balaton, which we just glimpsed in the distance, but then faced another long delay at the Croatian border.  This was the first time in our trip so far that we’d had to show our passports, and not just once, as we left Hungary, but again when we entered Croatia a couple of yards further on!  What's worse, John's extended wing mirror caught the Croatian guard's gun as we approached, causing a moment's panic.  While John was in the queue I got out and went to the only money exchange (most borders have several) and changed our forints into kunas (about 10 to the pound, so calculations aren’t quite as tricky as in Hungary!) Croatia doesn’t have a vignette system, just the usual toll booths every now and then, and again the queues were long and slow.  We skirted Zagreb and finally arrived, tired and hot, at Camping Slapic in Duga Resa, about 30 miles south west of Zagreb.  More about it next time but suffice it to say it’s a lot better than the last place!