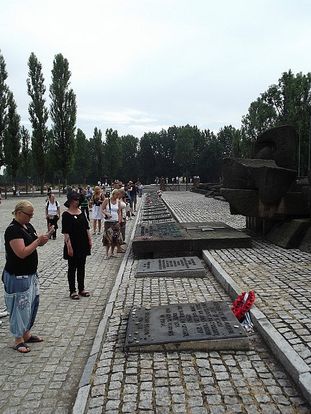 It is a working church, used for mass every Sunday.  It is used regularly for weddings, and on a higher level there are reception rooms, conferencerooms and restaurants carved into the salt. Return to the surface, fortunately, was by lift.  It was the proper four storey miners’ cage lift.  One lady in front of us would not go into it as she was claustrophobic.  What she was doing down there in the first place, and how they ever got her out, I have no idea.  Perhaps she is still there.

Next day was to be our last in Krakow, so we had a relaxing day, apart from a trip to Nowa Huta, the new town built by the Russians just outside Krakow, together with a giant steelworks. The Russians had decided that Krakow was too cultured and intellectual for their purposes, so they built Nowa Huta as an example of how a communist community should work.  Laid out like a British model village such as Saltaire or Port Sunlight, but with blocks of flats instead of houses, it had quite the opposite effect to what was intended.  Instead of fostering the Stalinistic type of communism they had hoped, it became the seedbed of proper Socialism, with trades unions growing.  When the uprising in Gdansk started, Nowa Huta was the second town to foster the quiet revolution that was to finally oust the Russians and give Poland its long awaited independence.It was a short journey in miles to our next stop, Zakopane, but it took a couple of hours longer than it should simply because of the volume of traffic.  The last ten miles was at walking pace. We found our site, on the outskirts, with no difficulty and the owner came rushing out to greet us like long lost friends.  It is a small site, almost akin to an English CL, with room for just 20 units at most.  While we were there there were only about eight others.  The owner, Maciej, fusses about like a mother hen, helping to pitch the caravan, filling the aquaroll, offering advice etc.  At first we thought it was charming, then we realised he is a bit obsessive, as is his wife.  He hovers by the door to his house, mop in hand, and whenever anyone uses one of the toilets or a shower he rushes over to clean it straight away. It is not unusual to see the wife polishing the sinks and taps at 11 at night.  Nevertheless it is a very pleasant site.  Zakopane itself is delightfully situated in the Tatra Mountains, with high peaks all around.  The architecture is unique, wooden chalet type houses on stone bases made with round river-worn stones and with roofs that have ridges and peaks going in all directions.  The town was once a very smart resort, but sadly has become a victim of its own success. The one road to and from it is perpetually clogged with traffic, car parks are full, buses are stuck in the traffic too so they are no faster, and the geography of the place means there are no short cuts or back streets to bypass the jams.  Fortunately the main street has been pedestrianised, but even here the pedestrian traffic is slowed to a crawl by the masses of people, mainly Poles, out to buy the truckloads of tack that is for sale.  Traditional Zakopane goods like stuffed toys, plastic walking sticks and all the other stuff you find at a fairground are being bought as if they were the latest and best.  There are long queues at every cash dispenser.  Yet hardly anyone stops at the stalls where aged farmers’ wives sell their home made cheeses and herbal drinks.  Amongst all these tack stalls are restaurants serving anything from burgers, to sausages, to steaks, to ribs.  Anything that would be quickly cooked and served with fries.  It is all such a shame.  And now it is raining, and the mountains we have come this far to see have disappeared behind the clouds.  Maciej promises it will be better tomorrow, but then he said that yesterday.  Whatever, we will be moving on on Monday (or possibly Tuesday) as Croatia is calling and we have three more countries to cross before we get there. PS there was 2 cm of snow fell on the mountains last night, but we can't see it through the cloud.