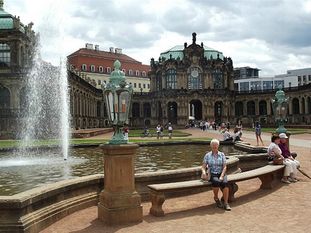 They say you should be careful what you wish for, in case it comes true.  In the Harz it was so wet and cold I even had to wear socks in bed, and I wished for warmer weather.  From then on it’s been in the 30’s, rather too hot for comfort!Our next campsite, LuxOase near Dresden, is one we used and liked 4 years ago.  Since then they’ve improved it further with another shower block and a spa.  There’s no swimming pool, but a lake for a cooling swim.  Luckily we’d done plenty of sightseeing in the area during our last visit, because this time it was too hot to do much more than sit in the shade and watch the comings and goings of the other campers, mostly German and Dutch.  (I’m sure they watched us too, and thought English people very odd – all those cups of tea…..!)

After a couple of days of doing nothing except for a trip to the local Netto, we stirred our stumps one afternoon and drove to the Swiss Saxony area.  We visited here last time and described it in our original blog, but to recap, it’s a scenic area of strange rock formations by the River Elbe.  It was pleasantly cool in the shade of the tall fir trees, and we watched some rock-climbers doing their scary thing on one of the high pinnacles. The next day was also too hot to do anything other than sit in the shade and drink beer. There’s a major brewery town near the campsite, Radeburg, and I must say nothing is as refreshing on a warm day as an ice-cold Pils. Radeburg was the first brewery outside the Czech Republic to brew lager by the Pilsner method. Next day was still hot so we decided to visit Colditz, which is only 40km away.  With its metre- thick stone walls, we reasoned it would be pleasantly cool inside!  On the way we stopped in Grimma, a small town much nicer than its name suggests, for coffee and a delicious slice of cheesecake.  Yes, the diet’s definitely gone for a Burton, overcome by irresistible German goodies.    Colditz was almost as hard to find as it used to be to escape from.  After Grimma we found the road closed and had to take a long detour.  Even when we reached the town, and could clearly see the castle looming above, it wasn’t at all clear how to get to it, where to park, or where the main entrance was.   With intrepid British ingenuity we finally found the way in and enjoyed looking at the exhibits and reading about all the daring escapes.  Interestingly, it was the French who had the most successes, with 12 to the UK’s 11 (and there were also escapes by the Dutch and Polish prisoners.)  But the Brits had by far the greatest number of heroic failures, with 109 attempts ending in recapture.  The methods used included tunnels, sewer pipes, ropes from windows, dressing up as German guards or even women, and the craziest of all, building a glider in which to fly off the roof!  Fortunately this was never actually put to the test, as it would probably have been a disaster. Now if this was in the UK it would have been made into a massive tourist attraction, with themed rides, a restaurant serving “prison rations” on tin plates, and staff dressed up as guards.  Instead it was all very low-key, with a handful of visitors and not even a café.  Presumably it’s not something the Germans are proud of, but it seems they treated the POW’s quite well and didn’t even punish them too severely when caught.  It was almost as though they looked on it as a sort of gentleman’s game. Clearly, even in war, the Germans were as class-conscious as the British.  This was a camp for officers only, and they were treated rather better than the non-officer class in their much more primitive stalags, as my late non-officer uncle could attest. He and his camp mates also made escape attempts but no-one made a TV series about them.The weather continued hot for the next few days, with occasional thunderstorms.  We made a brief visit to Pulsnitz, a small town a few kilometres from the campsite, which is known as the Gingerbread Town.  We had a mental picture of a quaint little place full of half-timbered houses, shops selling gingerbread, and pleasant pavement cafes where we could sample the wares. Unfortunately the town seemed to be stuck in a time-warp, very much the old East Germany – grim, grey and  uninviting, and even though it was a Saturday morning, the few forbidding-looking cafes were all closed.  We ended up going to the nearest Lidl for a coffee and some interesting donut-like cakes called “quarki” in their in-store bakery. The weather finally cooled down slightly so on our last day we finally made it into Dresden.  We’d gone into several churches and museums on our last visit so this time we just enjoyed walking round the beautifully-restored Baroque centre and sitting in various cafes watching the world go by.  As on our previous visit, our enjoyment was tinged with guilt at the wanton destruction and huge death-toll wrought by Allied bombers on a city of no strategic importance and which was full of refugees.  If anyone wants to know more I recommend reading “Dresden 1945” by Alexander McKee.  My uncle was in a POW camp near here and he and his fellow prisoners were made to clear up wreckage and retrieve bodies, a traumatic task.Once back at camp we took the awning down ready to move on tomorrow.  I confess I was a bit nervous about our next destination, Poland.  We already knew from various comments on internet sites that Polish roads were often in poor condition, the drivers somewhat reckless, and campsites rather basic.  We’d been trying to learn a few useful Polish phrases and found it an extremely difficult language.  We also knew that, as our car and caravan together weighed more than 3.5 tonnes, we’d have to buy a viabox at the border for paying tolls.  Then we met a German couple who painted an even more alarming picture – our car and/or caravan were sure to be stolen if we took our eyes off them for a minute!

We set off into the unknown on the morning of July 31st, taking the motorway to Gorlitz on the German/Polish border.  There was a huge, confusing parking area in the process of being rebuilt.  We parked and John went to the portacabin that served as a frontier post, while I stayed behind to guard the caravan (!) Forty minutes later he returned, after standing in a long queue.  There was only one young woman to deal with everything, from viaboxes to changing  euros into zloty.  He then had to read the instructions for the viabox and fix it to the windscreen.  Finally we were ready to tackle the Polish road system.  It was certainly a bumpy ride but we reached our destination with no problems, Camping Sloneczna Polana on the outskirts of Jelenia Gora.  It’s Dutch-owned, and a lot of the campers were Dutch too, which is usually a sign that the facilities are good, and so it proved. Next day we drove into the historic centre of Jelenia Gora, and parked in a manned carpark, as we’d been advised. The town has a splendid main square full of elegant Baroque buildings, impressive from a distance but in need of some TLC.  The streets were full of people, there were plenty of nice cafes, but the shops, and their contents, looked a little dowdy and old-fashioned.  However there’s no lack of modern supermarkets.  On our way back we stopped at a huge Tesco and there was also a big Carrefour, not to mention the usual Aldis and Lidls.

After lunch John had to change one of the caravan wheels, as it had got buckled somehow.  The Polish roads no doubt.  Our Dutch neighbours were full of offers of help, and recommended a nearby tyre place.  Sure enough they were able to sort the wheel out immediately and only charged 30 zlotys, about £6.As it was still only mid-afternoon we decided to drive the short distance to the Karkonasze Mountains National Park, where there are lots of shady forest walks and pretty waterfalls in rocky ravines.  The area is very popular with Polish holiday-makers and we came to a rather tacky resort, Szklarska Poreba, complete with all the usual funfairs, souvenir stalls and ice-cream parlours.  We drove back to the campsite through pretty countryside of wooded hills and rolling meadows.  There was a strange mix of smart houses and very dilapidated ones, and every now and then an incongruous factory or other industrial building, also often dilapidated. In this respect it’s similar to Romania or Bulgaria – the legacy of Communist –era industrialisation, with the consequent environmental damage.

Back at the site John replaced the original wheel on the caravan and programmed the satnav for Krakow, our next stop.  It’s quite a long journey but this time it’s mostly on motorways, which should be easier.  We hope so, anyway!