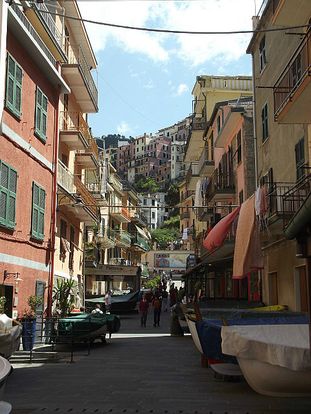 Our next target was the Cinque Terre, that beautiful stretch of coast in Liguria where the mountains tumble to the sea and where the famous five ports are accessible only by rail or sea. Too far to get to from Avignon, so we planned a break of journey at Camping Les Pinedes at La Colle sur Loup, just inland from the Riviera coast at Nice, nestling under the protection of the hill town of St Paul de Vence.  The French Riviera and its hinterland is one of the most attractive parts of France, but because of this much of it is developed with expensive and exclusive villas, most of the roads are extremely  busy  and the vistas that open up at each bend are wasted because of the inability to stop and take them in.Our journey started well as we took the old Route Nationale from Avignon past Aix en Provence and the slopes of Mont St Victoire, the subject of so many Impressionist paintings.  By lunchtime though we were struggling to find somewhere to park and eat our sandwiches, so we dropped onto the motorway in search of an aire, one of those lovely picnic areas that French Autoroutes have.  Well, when you don't want one there are plenty.  When you do………….  The first one we came to was closed for refurbishment.  The next one was a full service station, under refurbishment with limited space, all full, so we drove straight through it and out the other side.  The next aire was also closed.  Finally at close to two o’clock we found a space in a service area and ate lunch at a picnic table surrounded by rubbish.  I have to say that we usually have very pleasant experiences in Aires and Service Stations on French autoroutes, making it worth paying the toll to get on them.  This time, with a reasonable N road close to hand, I felt the toll of €18 was poor value.  Then, when we left the motorway at Cagnes I missed a turn so Jane took us round some decidedly narrow residential streets to get us back on track.We finally made the site at three and because of our large van we were directed to a pitch on the first level of the terraced site.  It was a good sized pitch, but close to a busy road with a lot of motorbike traffic, so a little noisy.  The internet connection here was very iffy, causing me to lose my rag on a number of occasions.  Next day was spent washing, Lesley doing the laundry and me cleaning the Avignon bird poo off the car and caravan windows, then on Thursday, a warm and sunny day, we drove up to St Paul de Vence for Lesley to visit the Maeght Foundation.  We had visited this modern art and sculpture gallery and gardens over thirty years ago and were impressed and Lesley was keen to visit again.   At €14 a throw I opted out and sat with a coffee, but Lesley thoroughly enjoyed it. Afterwards we drove up the valley to the Gorges du Loup, one of those spectacular narrow river gorges so common in this area, then up the hairpins to the "village perche" of Gourdon where we had an excellent lunch of skewered mixed meat.

The village is a real tourist trap, but likeable in spite of this.  The views from the terraces are magnificent, the Esterel to the south west, Monaco and Italy to the east, where the Alps come down to the sea, and, on a clear day even Corsica can be seen.  The village itself is made up of lovely old stone houses and a chateau where Queen Victoria stayed on a visit to the Riviera.  Most of the houses are souvenir shops, selling locally-made perfumes (we are only a few miles from Grasse, centre of the perfume industry) and the usual up-market tourist tack. Even the ice cream came in floral flavours – violet, lavender and rose.  Lesley had the latter and experienced a “When Harry met Sally” moment! On Friday we set off for Italy, this time using the motorway all the way.  It was very busy, in and out of tunnels and over viaducts with glimpses of the Med now and again.  As soon as we crossed the border traffic speeded up.  In Italy speed limits are for wimps.  When we finally left the motorway (€55 lighter from the tolls) we found that the last couple of miles were on narrow single track roads, a bit scary when you have a monster stuck to the back of the car.  However we made it safely to our chosen site, Camping River at Ameglia, east of La Spezia and close to the port of Lerici.This was a very nice site set in the trees close to the banks of the river Magro and its marinas.  We were rapidly dismayed the following morning when we found not only no hot water in the showers but door locks that would not open, resulting in Lesley being trapped for a while before she finally managed to beat her way out.  We complained to the receptionist who was most apologetic and got someone to sort it straight away.  The doors with bad locks remained locked and unusable and the water warmed up a little.  We were also disappointed that the advertised heated pool was not open, but were a lot more sympathetic to the management when we found that last October the whole site had been under six feet of mud and debris when the Magro had burst its banks.  Given the state it must have been in then it is a miracle the site was open at all now.   One thing the site did have, which we have been sorely missing, is a friendly campsite cat.  We first saw her sitting on a seat on the bar terrace, then next time I saw her she followed me back to the caravan.  She was well fed and affectionate, so obviously not a stray, but she was half-feral in her attitude to food, sucking it up like a Hoover rather than daintily chewing it!We spent a quiet weekend, doing a big shop at the Ipercoop in Sarzana, where we found food and drink much cheaper than in France, and sussing out Lerici (a lovely port) and La Spezia (a big industrial and Naval wasteland) for boat trips to the Cinque Terre. On Monday we took the plunge and drove to Lerici and took the boat trip.  It was not cheap, at €25 each, but well worth while, and much more enjoyable than doing it by train (although in comparison to UK train fares, Italian ones are unbelievably cheap.)

We had a super day visiting first Riomaggiore,    where we had an hour for coffee,  then Manarola,   where we wandered the streets for a while,  then Vernazza where we intended to lunch.  Sadly Vernazza was still in a bit of a state, following the damage caused by October’s floods,  so we took the next boat to the fifth of the ports, Monterosso.   If you have been counting you will have seen only four ports.  Port number three is Corniglia, which is not a port at all; it is a village on a hill with a landing stage fit only for rowing boats, which it is why it is not included on the tours.  Although geographically all these five ports are the same, in structure, architecture and colour they are all different. In spite of the maps and all that is said about them in the tourist brochures, they are accessible by car, although with the limitations of parking spaces even for the locals I would not recommend it.   And all five were hit by last October’s storms, which caused huge landslides on the cliffs and mudslides down the valleys and through the villages.  We saw pictures of the devastation, with cars piled on top of each other, houses half demolished and mud everywhere.  There is a famous walkway between the ports, the Sentiero Azzurro or Blue Path which has also been washed away in places.The fifth port, Monterosso, is set on a larger double bay, with the old town on one bay and a newer beach-based resort on the other.   We walked along to the resort end, thinking that would be where we would find a pizza, but realised our mistake and went back to the old town, which was choc-a-bloc with restaurants, all heaving.  We eventually found a little pizza restaurant and had a delicious pizza and glass of draft Peroni.

We were then fortunate to catch a boat which went directly back to Portovenere without calling at the any of the Cinque Terre on the way.   After an hour wandering round this picturesque old port, the fortified entrance to the Gulf of La Spezia, we took the boat across the bay to Lerici.  Incidentally this bay is known as the Bay of the Poets.  It was a haunt of the Romantic poets, such as Byron and Shelley, and it was from here that Shelley set sail on his final fatal voyage. After another quiet day we set our bearings northwards to start the long drive back to the UK for June.  We are now on Lake Garda, enjoying some hot sunshine in a lovely, peaceful site at Manerba.