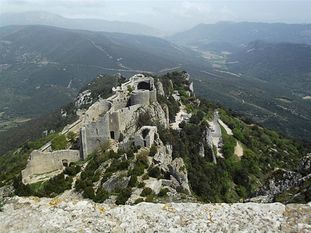 When we visited Carcassonne three years ago we became interested in the strange episode of French history known as the Albigensian Crusade, in which the Catholic Church made war on the Cathars.  This Christian sect followed a dualist belief in which existence was a constant battle between good and evil.  All material things were seen as evil, and the Cathars strove to renounce worldly things and live a simple, spiritual life.  They had no organised clergy, and women enjoyed an unusual level of equality.  This doesn’t sound particularly threatening, but the Catholic Church of the time, like all totalitarian regimes, felt the need to persecute all who didn’t toe the party line.  Many of the Cathars took refuge in castles perched high on rocky crags.  Although the castles were almost impregnable to attack they were unable to resist long sieges, as food and water ran out.  Thousands of Cathars died or were burnt at the stake as heretics.  The castles are spread over a wide and fairly remote area, somewhat off the beaten track.   There aren’t many campsites in the area but we found one called Domaine la Peiriere at Tuchan, in the heart of the Corbieres vineyards, which was within reach of two of the most spectacular ruins.The campsite couldn’t have been more different from the large, well-equipped one we had just left (L’Amfora, on the Costa  Brava.) It was very small, with a slightly hippy ambiance – a Bob Dylan album was playing in the bar(which was decorated with African and Native American masks)  and the first campers we saw were a young couple in full hippy gear, she in a long, colourful skirt, he with dreadlocks.  Only limited sanitary facilities were open this early in the season, and they were very basic – one squatting-type toilet and one ordinary one, which was on a raised platform so it really was like sitting on a throne!  The showers were cramped and the water shot out with great force, soaking everything in the cubicle (but at least the temperature was good.)  The cleaning of these facilities left a good deal to be desired – the young lad who seemed to be in charge of the place squirted a hosepipe around now and then.  There was a small swimming pool but it wasn’t functional, being half-full of murky green water and home to a large population of noisy frogs.  The best feature was a small lake with a kind of mini petting-zoo – lots of friendly little goats, ducks, hens and a very vocal turkey!The next day was sunny so we set off for Cucugnan, a pretty little village where we found a pleasant restaurant for our morning coffee, and a tourist information office.  Armed with leaflets, we drove up to the castle of Queribus.  It’s built on top of a rocky peak, at a height of 700 metres, and seems to grow out of the rock as if part of it.  The road goes almost to the top, then there’s a steep climb of 10 minutes to the castle itself.  It’s an extraordinary feat of military engineering, with stunning views over the surrounding countryside, but must have been most uncomfortable to live in.  It always amazes me how people in the Middle Ages had the skill to build such fantastic structures in the most inhospitable places, yet were so primitive in other ways that their idea of a toilet was a hole in the battlements!After our exertions clambering about these vertiginous fortifications, we were in need of some fortification ourselves, and returned to the restaurant in Cucugnan (to be honest, there wasn’t much choice – it’s not the most populated of areas!)  We had a delicious “plat du jour” and a carafe of the local wine, but found the prices a lot higher than in Spain.  We also found it quite difficult to speak comprehensible French, as we kept unconsciously using Spanish words, to the amusement of Madame (who spoke no English.)After lunch we went to the next castle, Peyrepertuse.  Again, the road took us  most of the way up the hill then it was a scramble up a steep, rocky path.  These castles are definitely not suitable for  anyone with mobility problems!  Unlike Queribus, which rose vertically from a small base, Peyrepertuse is spread out along the crest of a rocky ridge.  At 824 metres it’s even higher, and again the views were terrific, but the whole experience was very hard on the legs, and in the UK would no doubt be condemned as a health and safety accident waiting to happen – in other words, it was great fun!  Neither of these two castles were the scenes of horrendous massacres so the atmosphere was not sinister.  I don’t know if I would enjoy a visit to Monsegur castle, which was captured after a long, hard siege and 200 Cathars were burned on a huge pyre nearby.  Then we drove on to the Gorge of Galamus, along a scarily narrow corniche road.  The gorge is very deep and every bit as impressive as the gorges of Verdon or the Tarn, but a lot shorter and not as accessible.  There is a small hermitage in the gorge, which is very picturesque, but our leg muscles weren’t up to the long walk down to it, so we simply parked at the nearby belvedere, had an ice cream, and then drove back to the campsite. The next day was grey and drizzly so we spent a quiet day in the caravan, with a brief sortie into the village (Tuchan) to go to the Spar shop and the Post Office.  We couldn’t even pass the time by using the computer, as the site has no WiFi.  The following morning (28 April) was also grey and miserable so we felt it was time to move on, and set off for Canet-Plage on the coast near Perpignan.

The car was due for a service, and John had found a Hyundai dealer in Perpignan who could fit us in on May 2. In the meantime we intended to relax for a few days – there’s not a lot to see in the area, but there are long sandy beaches, lagoons with flamingos, and Canet has a pleasant promenade and a large marina.  I needed to catch up with the washing again, too!