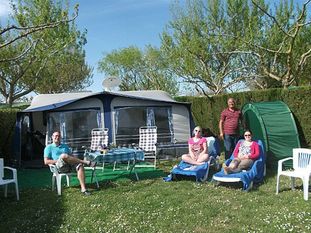 We had everything carefully planned for the visit of Helen, Michael and Nicole who were flying over from Don aster to Girona on Sunday.  We had carefully researched the camp sites on the Costa Brava looking for the most suitable one. We had a nice pitch directly opposite a lovely mobile home which we had rented for them.  We had looked round the area for suitable places to visit, restaurants to eat in and trails to walk.  We had stocked up their fridge with beer and wine (and a bit of food) and had covered their table with leaflets.  As Lesley said at the end of the last blog, all we needed was some decent weather. Sunday dawned bright and sunny, and when we got to the airport to pick them up on Sunday afternoon it was still warm, albeit a little overcast.  After unpacking and exploring we sat in the sun with a drink before going over to the camp site restaurant for dinner.  The girls say their meal was good.  Michael and I had steak, and I have to admit it was one of the nicest steaks I have had in a long long time.    During the night the wind got up.  By Monday morning it was up to force 8 and it continued unabated all day.  The Bay of Roses does get a lot of wind and it is popular with wind surfers and kite surfers, but even the locals were complaining about the wind this time.  Apart from a brief trip to the supermarket, where Michael spent time gazing in awe at the hams hanging in the deli, there was not much we could do but sit huddled in their lounge.  It was a good chance to catch up though.  Tuesday was better, and we drove round the bay to Roses  to have a wander along the prom and a browse round the shops.  We lunched well in the open air on the prom, then Nicole astounded us (and put us to shame) by stripping off to a bikini and plunging into the sea.  She did admit it was cold though!  It was good to get some warm sunshine after the previous day’s cold winds, and the kids caught the sun well.Next day we went to Figueras to the Dali Museum.  It is a twenty minute drive to Figueras, then, because of road works on the car park street which was blocking access to one of the car parks, it was nearly an hour to get through Figueras and parked.  It seemed that as the car park was full we had to wait for each visitor to park, visit the museum and come out again before the next car was let in!  By the time we had parked it was lunch time, so we visited a little bar at the end of the Rambla and had that good old Spanish standby, egg & chips and a beer.  You really can’t beat a good fried egg. (If you do it becomes an omelette. Groan).

Then back to the museum, where we found a huge queue snaking round the square, and another hour’s wait before we got in.  Lesley and I had visited the museum some ten years earlier and had found it very crowded, but had no recollection of queues like this.  Once in though it was amazing.  The world’s largest Surrealist Object was how Dali himself described it, and he was right.  Created from an old theatre, the rooms are off circular corridors on several levels, surrounding a central atrium, part in the open, part under cover.  It is packed with example of Dali’s work, sketches, paintings, sculptures and “objects”, some quite beautiful, most very scary and all thought provoking.Thursday too started off fine, but cooler, and we drove to Sant Marti, a little medieval village on the coast about 5 miles away.  This old village appears to have been “bought up” by a single owner, as all the houses are renovated to the same high standard to provide permanent homes and holiday apartments, all very smart, pedestrianised with nice block paving and spotlessly clean.  A bit on the artificial side but very pleasant nonetheless.  There is a small central square, opposite the church, with half a dozen excellent restaurants, their umbrellas competing to make the most of space in this small area.  The beach here is sandy, sheltered and provides views to either end of the bay of Roses, from L’Escala to Roses and the headland towards Cadaques.  Coming down to the beach are the ruins of the old city of Empurias, founded by the Phoenicians, developed by the Greeks and continued by the Romans, now left in ruins.  The beach is dominated by an ancient mole, built by the Greeks to protect the harbour.

An additional point of interest on the beach is a small arena where they landed the boat that was carrying the Olympic Torch for the Barcelona games.  I wonder if Barcelona had the same squabbling as Britain is now having, as to where the torch should go, who should have the right to copy it and even who is allowed to print (or even utter)  the words London 2012.  If this blog disappears, we know why.  After a walk along the beach we picked one of the Sant Marti restaurants for a long leisurely Tapas lunch.  Fried baby squids (chipirones), garlic prawns, gnocchi in mushroom sauce, deep fried chicken wings, patatas bravas, peppers stuffed with bacalau, deep fried “small fish”, green pimentos, griddled mixed vegetables, chorizo sausages, brie bruschetta, l’Escala anchovies on toast, Flamenquin Cordobes (a strange rolled meat stuffed with sausage), pulpo (octopus) a la Galego and squid a la plancha to name but a few.  We decided not to bother with a pud, but to have an ice cream back at the campsite.  As we drove back we noted the black clouds coming over the mountain. Back at the site we decided an afternoon siesta was called for before we walked down for our ice cream.  No sooner had we lain down than the heavens opened with an almighty thunderclap, and within half an hour the ground between the caravan and the kids’ cabin was under three inches of water, as was our awning!  Thunder and lightning continued for several hours and it rained well into the night.  When the Von Trapp children were frightened of the storm, Julie Andrews cheered them up by singing “My favourite things”.  When Lesley was little her mum used to recite this little poem:-The lightning flashed, the thunder roared,And all the world was shaken.The little pig curled up his tail and ran to save his bacon. Surprisingly on Friday morning it was fine again, and we decided to have a trip down to the Costa Brava proper, starting at Pals for a coffee.  Pals is another medieval village, much restored, but this time with a number of gift shops, which the girls enjoyed, and superb views over the Emporda plain.   Then it was twisty turny up and down roads along the corniche around the Begur peninsula, looking down on the pretty coves such as Aigua Blava and Sa Tuna, until we reached Tamariu, a lovely little resort with restaurants around the cove, blue seas and rocky cliffs.  Here we had paella for lunch, as the kids could not go home without having had one.  After a wander round the cove we headed further south to Calella de Palafrugell, where, as it happened, they were holding an international Laser class dinghy race.  We sat drinking sangria (or in the case of the driver, coffee) while we watched them bringing their boats ashore.  In order to avoid a back seat full of paella and sangria, I drove home by the flatter, straighter roads inland!Saturday was their last day, so we went through to Roses for ice creams and to do a bit of souvenir shopping, stopping at Lidl and Mercadona for sweets and biscuits to take home.

After a lazy afternoon we went back to Sant Marti for a farewell dinner.  We tried another restaurant this time, one with amazing skewered kebabs dangling on hooks and a Spanish version of a mixed grill with all sorts of griddled meats. After a debate as to whether it was warm enough to sit outside, we sat out with Lesley surrounded by gas heaters. It was a good end to a good week, which, in spite of all its attempts, the weather had not ruined.After seeing them off at the airport Sunday morning it was back to the campsite to catch up with “housework”.  A full washing basket, an awning carpet thick with muck from the flood and various other tasks kept us occupied for the next couple of days.  We did manage to fit in a visit to the dolmens on the hill above Roses, which was an interesting change.  During our first few days, before the kids arrived we had also visited Cadaques, via a steep and winding road across the headland to a charming little fishing port once the haunt of Picasso and Dali.  We visited on Easter Sunday, and the town was full of Spanish and French day trippers and a little tacky feeling.  A pity, because the setting is beautiful, and the view across the bay is one that features, in one form or another, in many of Dali’s paintings.  Many of the seafront buildings have a Modernista style to them, but many are looking a little drab.By Wednesday we had been at Camping l’Amfora  for three weeks, and although it was a much bigger site than we  usually prefer,  and we got off to a rather difficult start, we had had a good time there.  Time marches on and it was time we marched on too.  We had intended to spend some time in the Pyrenees, but the rain last week had fallen as snow there, as we could see quite clearly from the site.  So it was to be a sad goodbye to Spain and a short trip across the border to Cathar country.