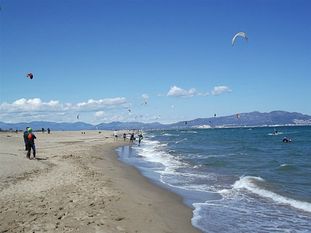 It may sound as if our trip consists entirely of visits to picturesque, historic places in brilliant sunshine, but of course it’s not all like that, and this episode of the blog will show that there’s a down-side to this way of life!

Up to this point we’d had a pretty clear idea of where we wanted to go and what we wanted to see.  Our time in Spain was nearing its end as we gradually moved north, towards France and then Italy.  But before we left Spain, Michael, Nicole and Helen were flying out to stay with us for a week.  Most campsites have bungalows and/or mobile homes for rent, so it was just a matter of finding a suitable site with a bungalow near to our pitch.  We decided to head back to the coast, as the Costa Brava would be a good venue.  But first we needed a base from which to search for a suitable site, and catch up with all the washing we’d been unable to do during our rather hectic schedule of sightseeing in the Madrid area.  An added complication was that it was now Semana  Santa, the week leading up to Easter, which is a very popular holiday in Spain.  In fact, most campsites put their prices up to high- season levels at Easter.

Rather than risk trying an unknown site, we decided to head for Vilanova Park, on the coast just south of Barcelona.  We’d stayed here on our last long trip three years ago and knew it had excellent facilities.  We also noticed that it wasn’t putting its prices up over Easter, and it was such a large site we thought we would have no trouble getting in.  Wrong! We arrived at 5.15, after a very long journey, to find a big queue in the reception office.  We were told they were almost full, but would try to fit us in somewhere.  “Somewhere” turned out not to be in the touring area at all, but in a distant corner of the site amongst the permanent caravans – the area that always looks like a shanty town, where Spanish families keep their vans pitched all year round and visit at weekends and holidays.  We were glad to have a pitch at all, but the level of ambient noise (kids screaming, TVs blaring, dogs barking) and the distance from all the facilities, meant we didn’t feel like staying very long!

It rained in the night and all the next day, but undeterred we set off up the coast for a recce. Even the nicest campsites look unappealing in the rain, and the problem was made worse by the fact they were nearly all thickly shaded by pine trees – ideal in the August heat, but on a dismal day they made the atmosphere very gloomy.

After viewing a few places we were ready for some lunch.  We were in the small resort of Pals, which has a lovely sandy cove with a rocky headland.  There was only one restaurant open, right on the beach, and crowded with families.  The terrace was protected from the rain by plastic sides and roof, which could be removed during good weather.  We were enjoying a pleasant meal when the light pattering of rain on the roof became a deluge, the noise of it so deafening it even blotted out the sound of a dozen Spanish families in full shriek.  Then water started creeping in under the sides, and cascading from the leaking joints in the roof, so there was much moving of tables to avoid being soaked. The waiters were so amazed they all came out and took photos!  We were reminded of a similar occasion in a café in San Remo three years ago when there was a freak hailstorm.  I call it the Jefferis Effect – our unfortunate ability to attract extreme weather!We finally found a suitable campsite and returned wearily to Vilanova Park, arriving after 9.  The noise levels were terrific.  Every caravan around us had their TV on and tuned to the football– Barcelona were playing, so the groans and cheers were extra loud, and kept setting the dogs off.  The noise finally died down about midnight and we fell asleep, only to be wakened a couple of hours later by a tremendous thunderstorm!  The bangs were so loud they made the whole van vibrate, the lightning was almost continuous and the rain on the roof was deafening.  It must have gone on for over an hour before we slipped into an uneasy doze.

Next morning we decided to move on, and packing up in the rain, with everything soaking wet, was no fun.  Then it proved difficult to get the caravan out of the awkward little pitch and there was a slight argument with a tree (the caravan won.)  The roads were busy, the rain made driving difficult and there was a long hold-up caused by road works.  But by mid afternoon we arrived at Camping L’Amfora, at San Pere Pescador, on the Bay of Roses, and it had stopped raining.An elderly Dutch couple had just arrived on the pitch next to ours and were busy putting their awning up, accompanied by much huffing and puffing and shouting at each other.  John remarked that it’s good to know it’s not only us who get cross while putting the awning up.  We left ours until the following day, by which time the Dutch man was busy pegging down acres of groundsheet in front of his awning, completely covering all the grass on his pitch.  By day 3 he was putting up a second awning outside the first one, but without sides, as a sunshade. So now not only did his pitch have no grass, it had no sun either.  Meanwhile his wife was rarely seen, but often heard, and we came to realise that shouting at each other was their normal method of communication.  Next the husband turned his attention to his satellite dish.  (For the uninitiated, almost all campers these days have televisions and large portable dishes.)  For several hours the dish emitted a variety of high-pitched whines and squeaks until he got it just right.  And that’s when the trouble started.  They had installed their TV not in the caravan but in the awning, which is basically just a tent with no sound insulation at all.  They then commenced to watch it almost non-stop, from just after breakfast to gone midnight, at full volume.  Sometimes they had friends round and held loud conversations, competing with the TV.  We would have had a quiet word with them about it, but several things put us off.  Unlike most of the Dutch people we’ve met, they were not in the least friendly.  They spoke very little English.  They may well have been deaf.  And it wasn’t just the TV, it was the late hours and the shouting.

There was no chance of them moving on, either – they were here for 3 months!  So we decided we would have to move to another pitch once the Easter holiday was over and the site wasn’t so busy.  And that’s what we’ve done – found a nice quiet pitch opposite a mobile home which we’ve reserved for the family.   We have the beach, we have the views of the Pyrenees, we have the views across the bay,  all we need now is some good weather, which has been in rather short supply so far!