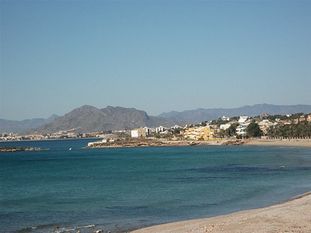 A strange thing happened on our last night in Los Escullos – it rained heavily. The area has a very low annual rainfall, and I reckon the whole year's worth fell in just one night.  I don’t know if this is a sign of climate change or the usual Jefferis propensity for attracting freak meteorological conditions!As the next leg of our journey was fairly short we didn’t have to set off early, and had time for a coffee in the bar before leaving.  It was a lovely campsite and we were sorry to go, but we like to see new places, and Murcia is an area we’d not visited before (although we passed through it three years ago without stopping.)  We arrived at our new site, Los Madriles in Isla Plana,in the early afternoon and chose a huge pitch with a sea view and, unlike our last one, plenty of sun!  After sitting down with a beer we put the awning up (we hadn’t bothered at the last three sites) and then went for a walk round.  It’s a very well-kept site with two lovely heated swimming pools, one indoors and one outdoors.  There’s also a room with three decent table-tennis tables, so John can demonstrate the skill he acquired with the U3A!  One of the reasons our pitch here is so sunny is that most of the trees on the campsite are deciduous, and still bare, although in summer they will provide lots of welcome shade.  Many campsites in Spain are full of pines or other shady evergreen trees, like our last site, so my top tip for choosing a winter site is – go for one with deciduous trees!  Having said that, spring is advancing fast and in the week that we’ve been here the bare branches are beginning to burst into leaf.  Our pitch happens to have one of the very few pine trees in the whole campsite, and while the shade is no problem – it mainly falls on one corner of the awning – the birds it attracts certainly are.  As a result the canvas is now thickly encrusted with bird poo, which will need to be scrubbed off before we can pack the awning away! It doesn’t help that John fancies himself as St Francis of Assisi and feeds lavish amounts of bread to the birds, which encourages them to congregate around our caravan.This site seems to be particularly popular with Germans, most of whom have spent all winter here, and probably do every year.  Many of them have personalised their pitches with pots of flowers, small windmills, flags and even little name-plates – "Willi and Renate", above a picture of Fred and Wilma Flintstone.  The average age of all these intrepid travellers must be in the 70’s – in fact, we’ve met one couple who are over 80 – so it makes us feel like mere striplings in comparison.  There’s certainly no need to feel jealous of the kind of bodies on display around the pool!Many of them are now in the process of preparing to return home, which involves a great deal of work.  The couple on the left of us have spent the last week methodically washing and cleaning every item in their possession.  First they tackled their groundsheets.  We only have one, which goes inside the awning, but serious winter campers cover the entire surface of their pitch with groundsheets and have four or five.  Then they washed all their curtains, including some net curtains which were far too large to fit anywhere in a 'van or awning, which made me wonder if they were taking in other people’s washing to augment their pension.  Meanwhile, every day they loaded a little bit more into their car which gradually sank lower and lower under the weight.  Our neighbours on the right have also been dismantling their awning and their pitch resembles a building site, with piles of poles and even lengths of timber everywhere.

I may mock, but I can appreciate how appealing it is to spend the whole winter here.  The way of life is extremely relaxed – you get up when you feel like it, wander down to the showers in your pyjamas and dressing gown, then spend the day sitting in the sun doing nothing much.  There’s no pressure, no rigid timetable, no need to dress up or go anywhere in particular.  The warm sun is good for arthritic pains and respiratory problems, and most people are too old to care about the ageing effects of too much sunshine.  For the more active, there are the swimming pools, tennis courts, table tennis, and the beach is ten minute’s walk away, through farmland and past some of the ubiquitous plastic greenhouses. The coast here is called the Costa Calida, or Warm Coast, and is less built-up than in many other areas, although there are plenty of low-rise developments.  Isla Plana consists of a few rocky coves, a church on a headland,  a couple of shops and restaurants and the ruins of a Roman villa.The nearest resort is Puerto de Mazarron, 5 km away, which has a long beach, a pleasant promenade and a smart marina.  A couple of kilometres further on is Bolnuevo, where wind and rain have weathered the rocks into fantastic shapes.

To the north are the hills of the Sierra de Algarrobo, beyond which is the City of Murcia, known in the UK mainly for its airport.  To the east is the rugged Sierra de la Muela, with the port of Cartagena (Roman Cartago Nova) and the heavily touristic areas of Mar Menor and La Manga beyond.  We have explored some of these places and will be exploring the rest over the next few days to report in the next issue.