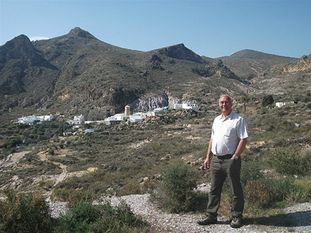 28thFebruary is Andalucia Day, a bank holiday throughout the province.  As this year it fell on a Tuesday it made for a long long weekend for the Spanish.  The influx started on the Friday, and on Saturday the campsite was organising an afternoon carnival and fancy dress party.  Best plan, we thought, would be to disappear for the day, go to Almeria, explore the castle and do some shopping.  On the way we would call at a caravan shop that we had found on the internet to get a replacement breakaway cable, which had broken away prematurely, and a replacement for our much missed whirligig washing line.  The website had shown a thriving business, selling new and used caravans and motor homes, parts and accessories, garden equipment, sheds and garages, swimming pools, you name it we can sell it.  When we eventually found it, having gone through the same police speed checkpoint three times, it was closed up and looked derelict.  So much for the Spanish Yellow pages, which listed the next nearest one as being in Seville, hundreds of miles away. Better luck in Murcia next week, we hope.On to Almeria, a city of two halves, or maybe even three!  The tourist guide we had picked up at the campsite was so hard up for entries it even listed the railway station as being of architectural importance. Looked like any other station to me as we drove past.  We followed the signs to the centro historico and the streets got narrower and narrower, until we saw a P sign and decided to call it quits and park in a typically Spanish underground car park in the basement of an ancient office block.

The town itself is given over to the sale of the two local products, pottery and rugs, with many shops lining its main street.  I find it difficult to say Nijar (pronounce NeeeHaar) in anything other than the voice of a rodeo cowboy, which reminds me of an incident at work a few years ago which, in order to protect the innocent, I won’t go into now. After a coffee and a browse we took a narrow mountain road up to the village of Huebro.  Here there is a spring, which the Moors harnessed and used for irrigating the whole of the valley down from Hueblo to Nijar, which they laid out in terraces.   A true oasis in this desert area.  The views from our picnic spot were stupendous.  Then it was down to the coast again to the lovely little seaside resort of Agua Amarga, where we walked along the deserted beach then sat with a beer and the obligatory tapas.  This is one of the areas of Spain where a tapas is truly a tapas.  A small plate of food served with a drink absolutely free. Two beers, a slice of tortilla and a plate of roast potatoes and peppers for £2.  Beat that! Wednesday night at the campsite restaurant is bargain night, so we went down to have their set menu.  I had thick vegetable soup while Lesley opted for the chicken soup, then proper Spanish choice of roast Bacalao (salt cod) or roast Lomo (pork loin) served with roast potatoes cauliflower or broccoli, then a choice of a piece of fruit or a tart, which was the ubiquitous flan to be found in varying forms throughout Spain.  The price, €6 each, included bread and a glass of wine. Reasonable food and excellent value. And a bit more Spanish than the pie and chips at the last site! Today is our last day here so we have been reasonably quiet, but this afternoon we took a walk up behind the campsite to the Caldera de Majada Redonda, the centre of a long extinct volcano.  The geology of this area is very strange.  I do not know much about the subject, but my interpretation is this. Where in most places millions of years ago the sea bed was covered, shells and bones crushed and compressed to form limestone, here some sort of volcanic upheaval took place before that could happen.  The area was once covered in sand dunes. These were covered by the volcano and fossilised before they could compress into rock.  They have later become exposed to form the weird and wonderful shapes we see on the beaches.  Meanwhile the hinterland is covered with boulders of almost every different sort of rock and evidence of that huge eruption is all over the place.  The variety of rock has led to countless old mine workings, now long abandoned, where they found gold, silver, copper, lead.  Now the only mining done round here is for the new Red Gold, strawberries and tomatoes grown under plastic. And to answer a comment made on the last blog, strawberries in Spain taste like strawberries, even at this time of year.  It is just the tasteless ones they send to Tesco and Sainsbury.