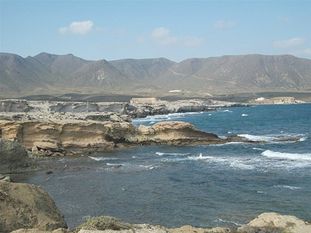 Our journey to Los Escullos was marked by a distinct lack of places to stop for a break, and a distinct deterioration in the scenery.  From Motril onwards the landscape is increasingly dominated by a rash of ugly plastic greenhouses, which supply most of Northern Europe with strawberries, tomatoes and cucumbers.  They’ve brought prosperity to an arid area which was previously poor, but have destroyed its appearance.   We finally found somewhere to stop for a coffee in the tiny coastal settlement of Castillo de Banos.  The restaurant was ambitiously named “Paraiso” – Paradise.  Its only patrons were a handful of very old men, and as we sat down with our coffees we realised we had taken their accustomed table. They had to sit at another one to have their game of dominoes and made their disgruntlement known by banging the pieces down as loudly as possible.  We soon made our escape.  Later, the only place we could find to park and eat our picnic lunch was a deeply unattractive lorry park.The campsite is near to the small seaside town of San Jose and we were following signposts thus marked when we came to a crossroads.  The sign to San Jose had been crossed out emphatically with red paint, which led us to suppose the road was closed, so we took the other direction, which involved negotiating the narrow road through an ugly village, then through a wilderness of plastic greenhouses.  Luckily we eventually managed to get back on the right road.However, once we crossed into the Cabo de Gata National Park the plastic monstrosities were left behind and the landscape became wild and elemental.  The area comprises Europe’s only desert, and the bare, red hills, sparse, scrubby vegetation, occasional palm trees and white, flat-roofed houses are more like North Africa than Spain – which is probably why the Moors felt so at home here.  The campsite is four-star and very popular for long winter stays.  Unfortunately its orientation is such that half the pitches are in sun and half in shade.  Needless to say, all the sunny pitches are already occupied.  In addition, all pitches are furnished with permanent overhead sunshades, no doubt very useful in the blistering summer heat, but this means that in the shady pitch we’ve had to use it’s so gloomy inside the caravan we have to put the light on at 5 o’clock!  To add to our woes, when we arrived we discovered that going over a particularly bad bump in the road had caused several of the overhead lockers to spring open and shower their contents all over the floor, including two mugs and a coffee-cup which had shattered in spectacular style.  Add to this the comments of one of our German neighbours – “You’ll never get TV reception in that pitch.  Internet’s bad too.  And if it rains, your pitch will be flooded” – and we began to get the impression we weren’t really welcome!However, the facilities are good, the restaurant does a three-course meal with drinks for only 6 euros, we’re overlooked by an extinct volcano and there’s a fabulous beach 10 minute’s walk away!  Even the shadiness is not so bad, as the sun is quite fierce at times.  The temperature is at least 20 degrees most days. A rough track leads to the beach which is overlooked by an old fort.  There are all sorts of interesting geological formations in the area, including fossil dunes, something I’d never heard of before, and the wind and waves have sculpted them into weird shapes.  Despite the lack of rainfall there is no shortage of wild flowers, though they are of the thorny and/or leathery-leaved variety.  However there’s an almost total lack of trees, except those planted in the small settlements which are quite literally oases.

The nearby small resort of San Jose is very picturesque, with a sandy beach, a small harbour, a scattering of fish restaurants and a maze of narrow streets climbing up the hillside.  In one of these streets there is a post office, and as we needed to post a parcel home we set out to find it.  According to the lady in the campsite reception, it’s only open in the morning.  When we eventually found it, with great difficulty as it was nowhere near the town centre, it was closed – opening hours 12.30 to 2.00!  We whiled away an hour or so in a café and returned, or at least tried to – the problem was all the narrow, steep little streets looked the same!  We eventually tracked it down again and opened the door – it was the size of a broom-cupboard inside.  Most of the space was taken up by an office desk presided over by the post-lady.  There was just room for the two of us to squeeze in and get our parcel stamped, although the post-lady had also managed to fit in a display of her home-produced olive oil, at 3 euros a litre!  On the positive side, the parcel we posted there on Friday arrived safe in the UK the following Tuesday, so the system works.As the weekend approached the campsite filled up with Spanish families here to enjoy the Bank Holiday (Tuesday 28 February is Andalucia Day.)  No doubt it will become quite lively for the next few days – the Spanish are not the quietest of people!  We’ll tell you all about it in the next instalment.