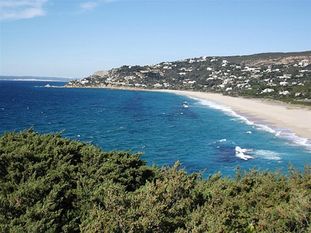 The daytime weather in El Rocio was lovely and warm, but at night the temperature was dropping to close to or below zero, with frost and ice to greet us most mornings.  We decided to move a bit further south, where the weather reports were showing it to be warmer.

Unfortunately our arrival in Conil coincided with a shift in the wind direction and we are now on the edge of the icy blasts hitting northern Europe.  Out of the wind and in the sun it is hot, still tee shirt and shorts weather.  In the shade the air temperature is down to the 5 to 10 degree range.  Out of the sun and in the wind the wind chill factor brings it back to zero or below. It makes it very hard to know what to wear or what to do.  Many of the Dutch campers who are here for a month or more have come prepared with their windbreaks, and are content to lie on their sun beds behind the windbreak exposing their ancient leathery skins in bikinis and Speedos.  The Germans stand around chatting in great big coats, scarves and hats.

This site, Camping Roche, was recommended to us as being smaller and less organised than the other two sites in the area, which are long term over wintering sites full of cliques and factions, bingo and concert parties.  No thanks, that’s not for us!  We were warned, however, that there is a certain amount of donkey braying and cock crowing from the neighbouring farm.  Hah.  One of our suggested titles for this episode of the blog was Jollity Farm, where everybody makes a row.  They certainly do!  As well as the donkey and the cockadoodles, there are cows, including some mums separated from their calves, making that dreadful plaintive mooing to be heard on any dairy farm.  And dogs. At night one dog starts barking, and is answered by dogs for miles in every direction.  Fortunately this is not a site used by Spanish weekenders, so we don’t have the cacophonous shrieking of Spanish mothers to put up with as well. And where there’s a farm, there’s a farmyard smell.  It isn’t always there, depending on the wind direction, but when it’s strong it makes sitting outside in the sun an unattractive option! However, the shower block is immaculate, and there’s plenty of hot water. There is one odd feature, however – neither the toilet or shower doors have locks, or indeed any sort of fastening.  But they are quite small, so you can clearly see the feet and head of the occupant, and thus avoid barging in on them! The showers do however have a major design fault with the plumbing.  The multipurpose tap controlling hot/cold/pressure is just at bum height. That’s fine until you bend to wash your feet.  Left foot washing switches the water off.  Right foot washing moves it to freezing cold.  I let my feet wash themselves in the suds on the floor after that. (NB.  I never have this problem.  That’s because my bum is smaller. Ed.)

The pitches are thickly covered in tough, springy grass, which is a pleasant change from the usual sand or gravel.  In fact this area, the Costa de la Luz, is very green and fertile, with lush pastures and numerous market gardens everywhere, and lots of flowers in bloom – a complete contrast to the arid landscape of Donana. The coast itself is spectacular, with long beaches of white sand alternating with small, rocky coves sheltered by cliffs of reddish stone.  The sea here is the Atlantic, with the huge waves and breezy weather favoured by surfers, and the air is incredibly clear and luminous, which is why it’s called the Coast of Light. After 2 or 3 chilly days when we simply relaxed, read books and made use of the free internet connection here, the temperature warmed up again ( though not in the rest of Europe, apparently – the UK has been having snow! ) so we spent some time exploring the coast to the south of Conil.  We visited Barbate on a Sunday, when the locals were out strolling on the prom with their children and having lunch in the seafront restaurants.  It was once an important tuna-fishing town but it looks as if the industry is in decline, and some of the buildings were a bit run-down, but there’s a magnificent new promenade and a huge beach, with clear views of Morocco which is only a few miles away!

We drove on to Zahara de los Atunes, another former tuna-fishing port with an even huger beach . We ate our picnic lunch sitting in the dunes and watching the waves.  The sea was an incredible deep blue, shading to turquoise in the shallows.  We drove on as far as the road went, to the lighthouse at Camarinal, for fabulous views of the coves at Atlanterra with their millionaire’s mansions.  Monday was even warmer – in fact the campsite was full of the sight of gnarled limbs basking in the sun. We don’t share the Anglo-Saxon mania for exposing the flesh as soon as the sun shines, so kept our jeans and sweatshirts on and went to Vejer, one of Andalucia’s famous “white villages”.  Like so many towns round here it has Moorish origins, which show in the fortifications and narrow streets of white-painted houses.  Being out-of-season it was very quiet – we only came across one other couple sightseeing – and hardly any cafes were open to satisfy our craving for caffeine and cake.  We eventually found one, and sat down to read the slightly out-of-date copy of the Sunday Times we’d discovered in a nearby shop.  It was obvious that we’re not missing anything of great import back home!   In the afternoon we explored some more rocky coves just north of Roche, where the rock is composed entirely of pebbles and shells compressed together thousands, or even millions, of years ago.  This whole area would be a wonderful place for a summer holiday, although it’s not at all developed apart from a few hotels which are mainly used by Spanish holiday makers.We’re moving on tomorrow to a very different area, the Costa del Sol, with its enormous resorts like Marbella and Fuengirola.  Our destination, Torrox Costa, will be rather more low-key, we hope!