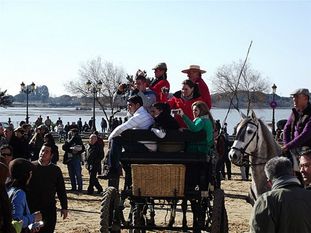 We usually prefer to see new places, but sometimes it’s nice to revisit somewhere we’ve enjoyed before and know to be comfortable, so we made our way south to El Rocio on the edge of the Donana National Park.  It was an easy journey on good, almost empty roads, and we arrived at La Aldea campsite at 3.00pm, in sunshine a lot warmer than we were used to.  After brewing up a cuppa, John donned tee shirt and shorts and we put the awning up.  If nothing else, this helps to avoid trekking large quantities of sand into the caravan.  El Rocio is entirely built on sand and it gets everywhere!  The temperature cooled down somewhat in the evening – after all it’s still only 23 January. The last time we were here it was late March, the trees were coming into leaf and there were wild flowers everywhere, but at the moment the trees are bare and only a few early flowers are out.El Rocio is a unique town which looks like something out of a Western, with wide roads made of sand and hitching posts for the horses which many of the locals still use as a means of getting about.  Actually, to say it looks like a Western town is technically incorrect.  As most of the emigrants to  New Mexico, Texas and Arizona came from this area of Spain, it's the wild west towns that look like El Rocio.  Its main claim to fame is the annual pilgrimage in May when a million people flock to this small town to venerate the Virgin of El Rocio, in the pretty church in the main square.  We spent the next few days exploring the town, which was very quiet, and the National Park.  It was the wrong time of year to see many interesting birds but there were various waders and stilts in the ponds and lagoons and a couple of marsh harriers flying overhead.  The lake in front of the church had its usual flock of flamingos, but we noticed the water level was rather low.  It turns out they’ve had an unusually dry autumn and winter. Thursday was my birthday and we drove the 16km to the coast, to the quiet resort of Matalascanas, where we walked on the huge, almost deserted beach collecting shells, then sat in the sun enjoying a beer.  It may not sound exciting but I can’t think of many nicer ways to spend a birthday. When we checked in at the campsite we were interested to see that the on the 27, 28 and 29 January they were charging high season prices, though not for us as we were using our ACSI card.  It turned out there was going to be a big fiesta, though not as big as the May one, and we were eager to see what would happen.  As it would all kick off on the Saturday we decided to go out for the day on Friday, and drove to Seville.  Just north of the city there are the extensive remains of the Roman town of Italica, at one time the third largest town in the empire, and birthplace of two Emperors, Trajan (of the column) and Hadrian (of the wall).  To be honest we hadn’t heard of it, but it deserves to be more widely known because there are numerous beautiful mosaics still in situ.   The weather was cool and showery, but in some ways this was an advantage as the wet brought out the bright colours of the mosaics.  These depicted birds of all sorts, and gods and goddesses whose iconography must have served as a model for later Christian art.  There was also an impressive amphitheatre, and unlike most Roman arenas in Spain and Southern France this hadn’t been converted for use as a bull-ring.  In some ways it was more atmospheric than the Colosseum, as the original floor remains, and you can tread where gladiators fought.  From there we drove into Seville itself.  We had been there 3 years ago and seen the main sights, but there were some interesting churches in the guide book that I wanted to visit.  With difficulty we found the first one, in a maze of narrow back streets, only to find it closed for restoration.  We didn’t manage to find the second church at all, and the third one – yes, closed for restoration!  Not one of our more successful visits,although Saville is a lovely city and it's always a pleasure to wander through its streets which are lined with orange trees.  We had another look at the huge and ornate cathedral, with its famous tower, La Giralda, which was the minaret of the mosque originally on the site, before returning to the car.

On the drive back to El Rocio the road was one long procession of horse-boxes and fancy wagons on trailers, all making their way to the fiesta.  Horses and horsemanship play a big part in the celebrations. The campsite was rapidly filling up too, but it started raining heavily in the evening and we felt sorry for all the people arriving in the dark and wet – though they sounded very cheerful, as only Spaniards en masse can!On Saturday there was warm sunshine again so we walked into town to see what was happening.  The heavy rain had left the streets like a quagmire – not muddy, but just very wet and deeply-rutted sand, which was quite exhausting to walk in.  It was a chaotic scene, with cars and horseboxes parked everywhere, seemingly at random, and lots of people on horseback or driving wagons around, to see and be seen.  All the shops were suddenly open, selling flamenco dresses or riding gear, and gypsy women were trying to palm sprigs of lucky foliage off on anyone foolish enough to catch their eye.  We called in at the supermarket to get something for our evening meal and it was bedlam, with people piling their trolleys high with food and drink for tonight’s parties.  Back at the campsite, barbecues had sprung up everywhere, and the sound of drums beating, firecrackers going off and flamenco singing carried on long into the night.

After dark we went back into the town to see the celebrations.  It was even more chaotic than in the daytime, as the horseriders and wagoneers now all had glasses of beer or rum in one hand, (this is why the Spanish always ride one-handed) and cars were veering everywhere in the dimly-lit streets, no doubt with the drivers also having a glass of rum in one hand.  From the numerous hermandads, or brotherhood houses, came sounds of flamenco singing and dancing.   Sunday was the important day, when the various groups of pilgrims would parade to the church for a series of masses.  We arrived in town just after 10 am and it was heaving.  We watched as a succession of brotherhoods made their way through the town, led by bands of men beating a drum with one hand while playing a pipe with the other.  Then came numerous women carrying ornate silver staffs, some bearing huge flower baskets, and men carrying banners and flags, while others shot rockets into the air with deafening bangs. As they reached the church the bells rang out to add to the cacophony.  As one group entered the church, another whose service had finished left by the back door.  This went on all morning, while thousands of people milled round in the streets, horse riders showed off their skill, carriages careered around, stalls sold churros and candles and there was a general air of bonhomie.  When we were here previously, in March, it was warm enough for the women in the processions to wear flamenco dresses.  In winter the preferred costume for both sexes was some form of horse-related garb – flat caps and padded gilets for the men, or the Clint Eastwood look of sombrero and fringed poncho, while the women wore tweed jackets , boots and trilbies – or, if young and slim enough, skin-tight jodhpurs.  I doubt if most of them had ever been on a horse in their life, but it was obviously essential to look the part. The last service was at one o’clock and after that we came back to the campsite for a quiet afternoon sitting in the sun.  Gradually the Spanish caravans and motorhomes packed up and left, and by the evening there were just a few remaining Brits, Germans, Dutch and Danes, and peace reigned once more.