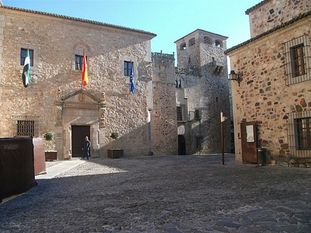 We left Madrid on a sunny morning for an easy drive westwards to Caceres, a town we and, I suspect, most British had never heard of before now.  We had seen mentions of it in other caravanner’s blogs, and geographically it fitted the bill as a halfway house between Madrid and the southwest coast. Reading our bible, the Michelin Green Guide, we saw that it had been awarded three stars, i.e. worth a journey, never mind a detour, so we opted to stay a couple of nights to check it out. We are now on our fourth night here and this evening decided to stay for a fifth.

First the site itself.  The pitches are a reasonable size, sandy gravel, terraced up a slight slope.  Each pitch has a little cabin containing what can best be described as a wet room; toilet, shower and washbasin, hot (well warm) and cold water, with each cabin having its own combi boiler.  The reception staff are friendly and the bread they sell fresh each morning is delicious.  Unusually for Spain there is wifi over most of the site and it is free.  The washing machines are only three euros instead of the usual four or five.Being used, as it is, as a stopover on the trek to the sun, there is a steady flow of Brits, Dutch, French and Germans coming for one night, or occasionally two, before moving on. The regulars know that after the bad weather of the north this is where the good weather starts, so are prepared with hoses and shampoo to clean off their caravans and cars.  Needless to say I took advantage of this myself.  And just so as you know how warm the sun is here, I did it in shorts and t shirt.  I would hasten to add that the air temperature is still comparatively cool at under 10, although it did rise to 15 today.On our first morning we went into Caceres, found the recommended car park and walked to the Plaza Mayor for the inevitable coffee in the sun.  The Plaza is a typical one, lined with arcades of shops and cafes, with the Town hall at one end.  Unusually though this Plaza is outside the town walls, which form one side of it.  Up some stairs and through an archway in the wall and you enter a different world.  Here I can only quote the Green Guide.

“Within Moorish walls lies a group of Gothic and Renaissance mansions beyond compare in Spain”.

Every alleyway leads to a plaza, every plaza is fronted by one two or three palacios and an iglesia.  Every corner opens up a new vista.  It is all pedestrianised, much with the original cobbles (hard on the feet at times). The buildings themselves are now museums, Paradors, University buildings, a few high class restaurants and a few offices.  There are very few shops or tackeries and tourist crap like we see in Carcasonne, or York for that matter.  On many of the steeples and roof tops are storks’ nests, with the storks just starting their annual wooing process, clacking their bills and rubbing each others’ necks. After that, the visit to Carrefour to stock up was a bit of an anticlimax, as was the afternoon spent washing the caravan.The next day we felt we had to visit the neighbouring town of Trujillo.  This too has a splendid Plaza Mayor, on several levels, and the town is topped by a Moorish castle.  Not quite as good as Caceres, but still well worth a visit. We then took the road north through the Parque Natural de Montfrague, famous for its birdlife.  Indeed we had not gone far before we saw a host of cranes marching across a meadow, like a row of dinosaurs.  The rocky plain covered with holm and cork oaks gradually gave way to the wooded ravines of the Tajo (Tagus) valley.  After we had a picnic by a deserted stream we spotted what we thought might be a vulture.  Great excitement.  Then a few more, circling over a lonely farmhouse.  We stopped for a photo and Lesley spotted one landing.  There under the trees were dozens of them stomping around like turkeys.  Across the road two electricity pylons had a dozen more perched there. Further on we came to the end of the escarpment where perched above was the Santuario de Monfrague, a ruined Moorish castle beside a small chapel said to hold a picture of the Virgin brought from the Holy Land by Crusaders. We climbed the 132 rough stone steps to see the splendid views over the river valley and reservoir.  Across the valley was an escarpment with hundreds more vultures soaring round.  An incredible sight. We returned home that evening to a wonderful smell coming from the caravan.  For this trip we had decided to bring the slow cooker, to prepare meals for us while we are out.   This is calling for a joke, but I’ll refrain.   At Carrefours I had bought a Spanish stew pack.  Now an English stew pack will contain a carrot, a turnip, an onion, maybe a parsnip or a leek.  In Spain a stew pack contains a piece of stewing steak, a lump of meat which might have been ham, a slice of what might have been oxtail but more the colouring of a pig’s tail,  a black sausage, a chorizo sausage, a strange piece of bone and  a lump of pork fat.  To this I had added a piece of left over lomo (pork loin) from the previous night, an onion, a couple of carrots, some beef stock and a generous splash of red wine. Cooked in the slow cooker for about 8 hours then served in a bowl with fresh Spanish bread.  Even though I say it myself, Delicious with a capital D.On Saturday we took a short trip out to another National Park, this time Los Barruecos, a few miles west of Caceres.  The town there, Malpartida, has on its town sign “European capital of the stork”.  It sure lives up to it.  Just outside the town is one of those huge club/restaurants with a large car park.  Arranged around the car park, in the traditional way, are dozens of lamp standards. Each and every one had a storks nest with a stork on it.

South of the town, the National Park is like something from another planet.  In fact if you were to take a photo through a red filter I am sure you could convince people it was.  Weather worn boulders are strewn around randomly, singly or in huge piles.  There is a lake, absolutely flat calm, apart from the ripples caused by the odd duck or egret. On one of the largest piles of rocks are over 30 storks’ nests, which are amazing to see.  Now that storks seem to prefer to nest on church steeples, chimneys, pylons, telegraph poles, lamp standards and even motorway overhead gantries, it is unusual to see them in the wild like this.

After another  trip to Carrefours and a lunch of soup made from the remnants of yesterdays stew, we drove up the hill south of Caceres to La Virgen de la Montana for the views over the town.  Then it was back to the caravan to prepare for travelling the next day.  Sitting there in the evening with a bottle of wine and a traditional Spag Bol we thought to ourselves, let’s stay another day.  So we did, and today we revisited the old town to see it in the afternoon sunlight. (And to buy two amazing cakes for our afternoon tea – Ed.) Tomorrow though, we head south to El Rocio.Postscript:  because we delayed our departure by a day and all the shops were closed on a Sunday we had to eat at the campsite restaurant tonight.  We opted for the mixed grill for two, of local meats, with a bottle of the local red.  I was reminded of the times when I used to go out with my mates from Leeds for a mixed Gorilla at the Head of Steam in Huddersfield.  Well, eat your hearts out lads, this plateful was bigger than all the ones we had there combined.  There must have been 2 kilos of meat, two big beef steaks, two big pork steaks, two big gammony sorts of thing, two huge chicken parts, chorizo sausages and regular sausages. Served with a salad (a gesture towards health) and a big basket of bread.  No chips though.