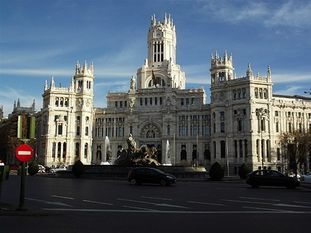 We woke to sunshine and thick frost, and a temperature of -1, so as well as packing up, John had to scrape the ice off the car before we could set off for Spain.  Within ten minutes we were across the border, but still very much in the Basque country.  The culture and language are the same, whether in France or Spain, and the people consider themselves to be Basques first and foremost, and French or Spanish second. The weather deteriorated during the journey – first there was freezing fog, then a brief period of sunshine before it became grey and drizzly. One advantage of travelling on a Sunday is that there are hardly any lorries on the roads.  The disadvantage is that they’re all parked in the lay-bys and service stations, so it was difficult to find anywhere with room to stop for a break!After a while the bilingual road signs gave way to plain Castilian, meaning we had left the Pais Vasco. Most caravanners at this point head straight for the warm south, but we like to stop at interesting places on the way and have always wanted to visit Madrid.  It can be very cold in winter, but as our main goal was to see the art galleries we decided the weather didn’t matter.

The Madrid campsite, Arco Iris, was an odd mixture.  There were the usual permanent caravans that you get on most Spanish sites, embellished by all sorts of ramshackle extensions, lean-to’s, fences and trellises, gazebos, barbecues, garden gnomes, plantpots and birds in cages. The initial impression was of a third-world shanty town.  But beyond these were the touring pitches, which were very spacious and obviously designed for hot weather.  Some had overhead sunshades, the rest had  smaller sunshades, presumably intended for eating under.  As the temperature was barely above freezing we were unlikely to make use of them!  We were the only touring caravan in the entire site, so we had our pick of pitches!

Only one shower block was open, but it was magnificent, ultra-modern and very minimalist, tiled throughout in pale green marble, with bright orange touches.  The facilities were the most high-tech we’ve ever come across. Unfortunately, they were so high-tech they were completely impractical.  All the taps worked by motion sensors.  This made having a shower quite a challenge – you had to stand in just the right place to get any water, and as soon as you moved the water stopped.  In fact I found it so frustrating I ended up using the disabled cubicle, which had a standard shower with proper taps.  I find the Spanish word for disabled, “minusvalidos”, a bit unfortunate!  Washing up was also impossible.  To fill the bowl you had to hold your hand under the tap the whole time, including the ten minutes it took for the water to run hot! Undaunted by these minor inconveniences we set off next day, in pouring rain, for the city centre. Luckily Madrid has an excellent and cheap bus and metro service.  Our destination was the Reina Sofia art gallery, one of the three major galleries that give Madrid the reputation of having the best collection of art in the world. This one is dedicated to modern art, and has a vast amount of cubism, modernism, surrealism and every other -ism you can think of.  The star attraction is Picasso’s Guernica.  This, along with a large collection of Picasso’s studies for the painting, and film footage and posters from the period, make for a powerful indictment of the horrors of the Spanish Civil War and indeed war in general. To put my librarian’s hat on for a minute – the title of this episode of the blog, Winter in Madrid, is taken from a novel by C.J.Sansom, set in Madrid in the grim period immediately after Franco’s Fascist victory in the Civil War, and is a really good read. There are two other very readable novels about the Civil War: Guernica, by Dave Boling, and The Return, by Victoria Hislop.  You can often learn much more about history by reading a good novel rather than a textbook!  Feeling the need for sustenance after leaving the Reina Sofia gallery, we took refuge from the downpour in the first restaurant we came to, where we had a three-course set meal with a glass of wine for 9.50 euros.  We were pleasantly surprised by how readily available cheap food was in Madrid, unlike some cities we’ve been to.

The rain stopped during the evening but the temperature dropped below freezing.  The 6-amp electricity supply, which is the norm in many European campsites, was not enough to keep our heating at the level we needed, so we had to use gas, and leave it on overnight.  We woke early next morning, absolutely freezing – the gas had run out in the night!  Poor John had to go out in the frost in his pyjamas and dressing gown, use his lighter to thaw the frozen lock on the gas locker, and change the cylinder, so we could have heating and boil a kettle for breakfast!If the day was cold, it was at least bright and sunny, and everything looked so much better. Although not the most beautiful of cities, Madrid has a fine old Plaza Mayor and some impressive civic architecture from the 18th and 19th centuries.  We had a walk round the old town,  culminating in a most enjoyable lunch in the Mercado de San Miguel.  Once a market hall, it’s now a sort of food court specialising in tapas of every sort.  We love tapas, but eating them in a bar can be a bit daunting as they’re not labelled, and you often don’t know what you’re getting.  But in San Miguel every single one – and there were hundreds – had a label and a price. You could make your selection from a variety of stalls then sit down to eat at tables in the centre.  I could have happily moved my bed in and spent a month or two working my way through all the food and wine on offer!   Our main goal was the biggest and best of the art galleries, The Prado.  It was a mind-blowing experience.  Think of all the famous paintings you’ve ever seen reproductions of, and about 75% of them seem to be here, and in vast quantities.  Not just one Hieronymous Bosch, but a whole roomful of them!  Not just one roomful of Rubens, but three! Goyas and Velazquez by the score!  It wasn’t possible to study every single picture so we concentrated on the highlights.  The entrance ticket is good for a whole year and we plan to return to the Madrid area in the spring, so we’ll be back.  John bought me a lavish illustrated guide book, for my birthday next week, so I will study it at leisure then decide what I want to see again next time.Back “home”, we had the easiest and cheapest evening meal ever.  The supermarkets sell bags of various different types of frozen paella, for less than 2 euros.  All you have to do is tip it in a frying pan and stir for a couple of minutes, serve with a bottle of white wine (also less than 2 euros) and bob’s your uncle.  Eat your heart out, Jamie Oliver!Tomorrow we’re off to Caceres, still not in the warm south, but it looks like a fascinating old town and we’ve read good reviews of the municipal campsite.