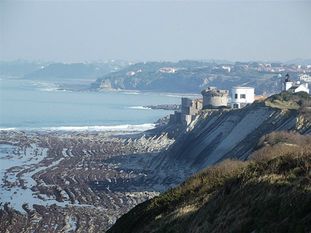 Our first day travelling took us from Brighton to the Channel Tunnel, a tedious trip via the M25 and M20.  We took the long way round because the direct route along the coast through Bexhill, Hastings and Rye is scenic but very slow, especially with the caravan.  We arrived at the tunnel in good time, expecting a half hour wait for our train, but were shepherded straight on to one which left almost immediately. We do not usually use aires as overnight stops with a caravan but on the recommendations of many caravan blog members we did on this occasion.  The Aire de Baie de Somme is on the A16 close to Abbeville.  Being Yorkshire by adoption we were trying where possible to avoid toll roads, joining the A16 just before the aire and thus paying only €2.30 in tolls.  One of the reasons we have avoided aires in the past is security.  In this case there was a gendarmerie patrol car seen on a couple of occasions and late in the evening a fleet of twelve fully loaded National Police minibuses arrived for their supper.  There were overnight trucks parked in the caravan area close to the service building and that too gave us a feeling of security.  We sleptsoundly in spite of these comings and goings.There is a quieter caravan parking area beyond the marshes, but we felt this was a bit out on a limb, especially as there was no-one else there.  Next morning we awoke in the dark.  Because France is an hour ahead of UK, sunrise is not until 8:30, something which confused the body clock for the next few days.  We continued along non-toll motorways and the old Route Nationales via Rouen, Dreux, Evreux and Chartres to Tours, stopping in an aire near Rouen to brew up some coffee and again in a grotty layby to eat our sandwiches, there being a distinct lack of aires on the N roads.  At Tours we were getting a bit worried about reaching our next site before nightfall so we joined the autoroute towards Poitiers.  We needn’t have worried, of course, because just as dawn is later, so sunset is later.   We have often read that south of the Loire the weather improves and, lo and behold, it did. From a typical misty northern France, with pluie faible, (an excellent term for drizzle) the sun came out and the sky was blue.  Not so much of a blessing really because driving south it was a bit dazzling.  The camp site we were aiming at was Le Futuriste, set on a hill close to Futuroscope, an amazing theme park north of Poitiers, surrounded by high tech industries.  The directions in the guide book were vague, to say the least, so I had programmed TomTom Jane with the map co-ordinates. These produced the right street name, and looking at Jane’s route it seemed fine.  In fact she took us to a street of the same name in another village several miles from where we wanted to be.  “You have reached your destination” she called out, as we stopped at the pretty little market square.  I don’t think the locals would have been happy if we stopped there. There was no sign of a toilet block or electric hook up, and we were beginning to get strange looks.  After circumnavigating narrow streets for a while we got out of the village and looked again at the maps.  Jane showed another campsite a few miles away so we set off for that.  Fortunately it was the one we wanted.  I still have no idea where it is and doubt if I could find it again. Le Futuriste is a Kawan Village site and maintains that chain’s high standards.  The toilet block is superb, warm, new tiles, excellent showers. A slight drawback is that the gent’s side is closed off season, so it is a unisex facility.  There are fine views from the site over the Futuroscope complex. Wednesday we hit the road again, keeping to the non- toll roads, the N10 soon becoming a virtual motorway.  Good smooth fast driving, well, as fast as is legal with a caravan, limited to 90kmph in France.  This road, as was the road from here all the way to Spain, was one long convoy of Spanish and Portuguese trucks, mostly empty food lorries returning from the UK having satisfied the British thirst for out of season fruit and veg.  They all trundle along at a fast pace and do not cause anything like the congestion experienced in the UK.  We stopped at an aire to brew up again, at a second aire to buy sandwiches, and a third aire, just north of Bordeaux, to eat them. When we hit Bordeaux we hit the fog. A real pea souper all the way round the city and for 20 miles south.  Then it was out into the sunshine again for the long drive across the Landes. Here were several major road improvement schemes.  As space is not at a premium in France, when they have to replace a bridge they don’t take you down to miles of one lane and jams, they build a new temporary motorway in a wide arc around the bit they are repairing.  That way the traffic keeps flowing at the same speed. We reached our next stop late afternoon.  Camping Larrouleta, in Urrugne, is just south of St Jean de Luz, close to the Corniche Basque.  Here the Pyrenees tumble (quite literally in places) down to the sea.  The geology is amazing, with great sheets of limestone at an angle, sloping down into the rough Atlantic.  The formations were not unlike slate, but on a much greater scale. The corniche road provides splendid views of the coastline from Biarritz in the North to Cabo Higer in Spain, with the Pyrenees in the background.  The wide sandy beaches combined with the big Atlantic breakers provide for excellent surfing, and every beach has surf schools.

We had a surreal experience on the deserted beach at Hendaye. A buxom young woman appeared, strolling  along at the edge of the sea stark naked. Although the sun was shining it was only 9 degrees and we were wrapped up in fleece jackets.  These Basques must be hardy types!  Later, Lesley had a treat too when she saw a surfer struggling into his wetsuit and revealing all of his impressive physique. We explored up the coast as far as Biarritz, a once very fashionable resort frequented by emperors and monarchs, film stars and pop idols.  Now the population consists of middle aged surfer dudes and posh elderly French women in fur coats.  Maybe it’s different in summer.  St Jean de Luz is a very pretty little port.  One side of the port is the main town, a very French seaside town with a long beach.  The other side is lined with typical Basque white houses with red shutters in the village of Ciboure.   We had an excellent lunch in St Jean, in a typically Basque restaurant, complete with open log fire.  Fish soup, complete with a large langoustine floating on top, delicious pate cooked in a filo parcel with a couple of slices of liver sausage, confit de canard cooked Basque style, a little bowl of veal mince cooked in duck fat with bits of local grown pimientos, and a  little bowl of piperade, all washed down with a small bottle of local Basque white wine (Xuri).  We had just enough room to cram in a crčme caramel and a gateau Basque.    We have been here three days now, and will move on to Spain tomorrow.  We have caught up with the washing, visited the local Leclerc supermarket to stock up, and attached our “long vehicle” plates to the back of the caravan, a new requirement for Spain for any unit over 40ft long.