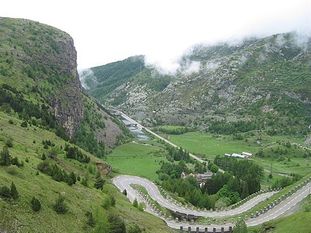 We left Pian di Boccio on Friday morning, a little sad to be leaving. The longer we had stayed here the more we liked it.  We have read reviews of many campsites which say "suitable for overnight stops only".  This is one where the opposite would apply.  Like our old friend Camping Bacchus in Greece, it is a site that has to be allowed to grow on you.The trip was to be in three easy steps. From here to Garbagna, north of Genoa, then over the Alps towards Lyon, then up to northern France, leaving the final morning to get to the tunnel.  We had decided to use the toll roads, if only to get some better surfaces, and it proved worthwhile. The motorway took us out of Umbria into Tuscany, around the Florence ring road, with, sadly, absolutely no views of Florence, then down to the coast near Viareggio.  We were amazed at the contrast between Umbria and Tuscany, then at the miles and miles of nurseries between Florence and the coast, growing ornamental trees and shrubs for gardens.When we hit the coast we were travelling between the numerous resorts of the Riviera di Levante and the Alpi Apuane, famed for their Carrara marble quarries.  Next came the headland of La Spezia followed by the Cinqueterre, then endlessly in and out of tunnels towards Genoa.  Three years ago we had come along this route one November morning to be trapped in one of these tunnels for an hour or so because of snowfall at the other end.  This time the weather changed again, from fine to torrential rain.

We turned north at Genoa in a downpour which only eased as we turned off the motorway towards Garbagna and the interestingly named Camping  E Maieu.  We had found this site in the ACSI book and chose it just because it happened to be close to the route at about the right time of day.  The road out of the village was narrow and the site was very poorly marked when we got there.  It also involved a sharp right 270 degree turn to get in and a very narrow path down to the pitch the nice Dutch lady owner chose for us, which was a long narrow one with no exit.  The pitch itself was fine (apart from the worries about whether we would ever get out again), being surrounded by trees and very private, and the facilities were good, but it was almost like camping in the wilderness! Fortunately we managed to turn the caravan round next morning without too much trouble, as it was 3 inches shorter that the width of the pitch and the bushes were mainly soft growth, and we picked up the motorway and continued northwest across the Po valley, endlessly boring flat fields with little or no landmark, to Turin.  Here the heavens opened and visibility was negligible. It was a pity, because the drive up the valley towards Susa should have been so scenic.  Eventually the rain stopped and snow-capped peaks could be seen through the gaps in the clouds.  I think it also helped that we were beginning to climb above cloud level.  At Susa, we left the motorway, topped up with fuel and began the long ascent of Monteceniso and the Col du Mont Cenis.Most people taking this route from Italy to France choose the eight mile long  Frejus Tunnel, which carries 80% of the commercial road traffic between these two countries.  The thought of eight miles at 45 mph with nothing to look at except the back of the truck in front, and paying Euro 45 for the privilege on top of the toll road charges either side, did not appeal.  So, the 2083 metre Col it would be.  The guide books and various other travellers had said it was do-able, with care, so nothing ventured……..  In the event it was a reasonably easy ascent.  The roads on the Italian side were a bit rough in places, with some quite narrow hairpins, but once we were up the first part and having had a break for a coffee in a rather strange old road stop bar in Bar Cenisio, we crossed the French border onto better roads and climbed the last four hairpins to what we thought was the summit.  Actually it wasn't.  The French customs area here, long abandoned, is a few miles behind and above the border with Italy, but still a few hundred feet and a couple more hairpins below the summit itself.  We stopped to stretch our legs at the old customs house and were delighted to see an Alpine marmot, at the edge of its burrow, staring back at us.  As we drove the last few bends to the summit there were more of them.  Large and rather slow, they spend eight or nine months of the year hibernating under the snow, the other couple of months breeding and getting fat ready for the next winter. The view from the summit was well worth the trip, snow capped mountains and high waterfalls all around and a lovely blue lake (actually a reservoir) with restaurants and other pit stops along the side of the road.  There were meadows full of Alpine flowers - gentians, cowslips, large white anemones and others I didn't recognise.

The descent on the French side was easy, by comparison, with a few wide hairpins and lots of ski stations and lifts as we dropped into the Arc Valley at Lanslebourg.   Then it was down the valley and back on to the motorway for the trip past Chambery to our chosen site for the night, Camping les Bords du Guiers at St Genix Sur Guiers, which is apparently the cake capital of the Alps, on the border of Savoie with Isere.

The weather was hot and sunny again, so having pitched camp we changed out of our mountain gear and sat with a cuppa in shorts and t-shirts.  I was looking at the plans for the next day and realised we had apparently counted the days wrong and we had a day spare.  Should we have two slow days drive or have a day’s break and stick to the original plan?  It was a nice site, with an inviting pool, so let’s have a day’s rest.  That night the rain caught up with us and we had a typical Alpine spring evening of thunder and rain, but next day was fine and we relaxed by the van and by the pool.  Later in the afternoon it became ominously black again and when, after dinner, I went over to the WiFi hotspot to update the blog the heavens opened.  I was trapped on the reception veranda for an hour or so and eventually gave up waiting for a lull and got soaked running back.  The whole site was under water.  It poured well into the night, but next morning you would not have known it.  The puddles had disappeared, the sky was blue and everyone was up and about enjoying the sun again.It was then that we discovered the mistake in our route planning was not in the number of days but in the number of sites.  Instead of missing a day in the plan, I had missed a site, so when programming the Tom-Tom with our next destination, near Arras, I found the journey ahead to be 9 hours.  Achievable, done before, but not a good idea to arrive at an unknown campsite at 7:30 pm.  Back to the drawing board.  We listed possible sites along the route, (which would not change), set off along the autoroute, put on cruise control and waited to see how far we could get before the time came to pitch up for the night.I have always been fond of France.  I love its atmosphere, its ambience, it has some of the most spectacular scenery in Europe, some of the prettiest villages, most of the best food and drink.  But its drawback is its size.  Between all these lovely towns and villages are endless miles of rolling agricultural countryside, lovely to see first trip, good to see second trip, quite interesting on the third trip, but after that it becomes a chore.  It is a long road past Lyon, Macon, Beaune, Dijon, Chaumont, Troyes and Reims to the Channel.  Take three weeks and it would be a wonderful trip, through gastronomic Burgundy, the edge of the picturesque Jura, the fascinating cities of Dijon and Troyes, the Champagne region, Reims with its cathedral, World War 1 battlefields.  Do this in a day on the autoroute, limit your speed to 60mph because you are towing, and it is an expensive bore.

However, needs must, and at 4.30 we stopped at Camping Municipal du Bord de l'Aisne in Guignicourt, just north of Reims.  After pitching up we visited  Carrefours to buy some bits and bobs and top up with cheap diesel and had our last meal abroad, veal steaks with linguini.  We were also able to pick up UK television for the first time in three weeks, which served to remind us that we had been missing nothing, apart from a new series of Kate Humblewatch.From Guignicourt next morning it was just a couple of hours to the Chunnel and we turned up 90 minutes early.  I was wondering where we could park up for some last minute eating or shopping when before we knew it we were in the check -in lane.  The magic camera deciphered the car registration number, and the check- in machine welcomed me personally and offered me an earlier crossing, in 10 minutes time.  So that was that, bye bye France, bye bye Europe, see you next year we hope!