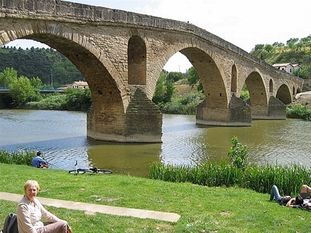 At first the weather got even worse as we retraced our way through Roncesvalles. The clouds were even lower and thicker than yesterday and visibility was almost zero.  But it improved as we descended into a wide plain, passing through small towns that had grown up along the Camino to cater for pilgrims.  Our destination was Camping El Molino in Mendigorria, Navarre, about 25 km beyond Pamplona.  The large site was full of noisy Spanish families when we arrived, but as it was Sunday they had all packed up and gone home by the evening.  As we'd hoped, the sun was shining and we sat outside enjoying the warmth before exploring the site.  It's quite large, with a lot of statics and bungalows, but they're quite separate from the touring area. There's just one sanitary block but it's very large, well-equipped and clean. The entertainment facilities look very good - a big swimming pool with water slide, tennis, squash and pelota courts, boating on the River Arga which adjoins the site, a large restaurant and bar, and a supermarket where we bought a bottle of wine to accompany our evening meal. Next day was overcast but at least it wasn't raining, so we headed into Pamplona (Iruna in Basque.) The old town inside its fortifications stands on a small hill, and the new town spreads out over the surrounding plain in acres of soulless modern blocks.  The streets of the old town are like canyons – tall, balconied buildings and dark, narrow streets.  The outside of the Cathedral of Santa Maria la Real was shrouded in scaffolding but the interior was impressive.  There was a surreal moment when we came across a lone archaeologist digging in a corner, and saw him pull out a human jawbone and casually put it in a bag full of other bones.  We headed for the main square, Plaza del Castillo, for a lunch of pintxos, the Basque version of tapas.  As nothing was labelled and the waiters didn’t speak English it was hard to tell what they all were, so we ordered some at random.  One of mine was topped with a very tiny fried egg.  I just hope it wasn’t from an endangered species of small bird!Pamplona is also famous for the annual running of the bulls, or encierro, and the streets are lined with wooden barricades which lead the bulls to a grisly end in the bullring.  Ernest Hemingway brought this event to the attention of the world and there is a statue of him outside the arena.On our way back to Mendigorria we stopped at Puente la Reina, a beautiful old town on the pilgrim road with an amazing eleventh-century stone bridge.  At the campsite a very strong wind had sprung up and the awning flapped and creaked alarmingly, reminding us of the gales in Oliva more than a year before.  We saw on TV that there was heavy rain and flooding on the north coast, where we were heading.  Does mad weather follow us everywhere?!Luckily next day was dry and there was even some sunshine, so we made sandwiches and set out to explore the surrounding area.  We passed through a series of ancient, almost deserted towns – Artajona with its completely-preserved medieval walls; Tafalla, supposedly founded by Noah’s grandson, Tubal  (Lord knows why); and Olite, with the extraordinary royal castle of Carlos the Third, rather like a smaller, prettier version of Gormenghast.

We were heading for the desert region of Bardenas Reales, a desolate, eroded landscape like something out of a Western.  Bumping along the gravel roads we saw no sign of human life for miles, but plenty of interesting birds including brightly-coloured bee-eaters.  At the hilltop pilgrimage church of Nuestra Senora de Yugo there was a viewpoint over the lunar landscape. Emerging back onto normal roads we stopped in Tudela, another fascinating old town where, like almost everywhere else, the historic churches were closed.  We even struggled to find an open café!  We drove back through the extensive Rioja vineyards.  Every few kilometres there was a picturesque village on a hill, consisting of a big church with an ornate tower and red-roofed houses cascading down the slopes.  It was reminiscent of Tuscany, but very much off the tourist trail.The campsite had filled up with another Dutch rally and, sure enough, it started raining during the evening!  Luckily we had already taken our awning down ready to leave next day. The arrival of a large and rather boisterous party of Spanish schoolchildren made us glad we weren't staying!It was raining in the morning as we packed up and set off, and it was still raining several hours later when we arrived at Camping Camino de Santiago in Castrojeriz, Castilla y Leon.  It was the sort of small, leafy campsite that would be delightful in warm weather, but unfortunately it was a sea of mud.  Lucky I’d brought my trusty wellies!   However, we had a nice surprise when we woke next day to blue skies, sunshine and a view of a picturesque ruined castle on a hill overlooking the campsite.   We set off early for Burgos, about 40  minutes away by car.  Reminders of its past as a wealthy and important town were everywhere – the ornate Arch of Santa Maria, the fifteenth-century Casa del Cordon and of course the huge, flamboyant Gothic cathedral, the third largest in Spain.  However our first stop was the splendid Plaza Mayor for a coffee and a spot of people-watching. Fortified by caffeine, we tackled the cathedral which contains, amongst other things, the tomb of El Cid, who came from Burgos.  His statue crops up all over town, looking strangely like Charlton Heston who played him in the film.  Burgos is a most attractive city with lots of pedestrian areas, pleasant squares and long, tree-shaded walks along the River Arlanzon.  Like all the rivers we’ve seen so far it was swollen with the recent unseasonable rain.Later in the day, back at the campsite, we enjoyed sitting in the sun for a while, then went for a walk around Castrojeriz.  It’s a long, thin town of ancient stone houses built all around the base of the hill with the castle on top.  The Camino de Santiago runs right along the main street, so there are several pilgrim hostels, easily identifiable by the hiking boots outside the door and the washed underwear hanging in the windows!  We drove up the rough, unmade road to the castle for extensive views of the surrounding plain.  We passed several troglodyte dwellings dug out of the hillside, which are still inhabited. Back at the caravan, John went to the bar to use the wifi, then we debated where to go next. We've enjoyed the relaxing atmosphere of this campsite, though the facilities are a bit basic and everything's a little bit run-down.   Reflecting on the trip so far, we felt that in some ways this is not so much a holiday but a continuation of our "Grand Tour" - it's all about the journey.  We've certainly been to some interesting, off-the-beaten-track places, and it's refreshing that everyone so far has spoken either French or Spanish to us, because we've not been to places that many Brits go to.Next day was sunny again, and it was time to move on, this time heading north, away from the Camino and towards the coast.  For a time we drove along almost deserted roads across a high plateau with occasional flat-topped limestone hills – the Meseta, which extends throughout most of central Spain.  We passed wheat fields, houses made of adobe and roadside banks of red, yellow and purple flowers - poppy, mullein, fennel, mallow and larkspur.  Finally we joined a motorway and could see distant mountains, the Picos de Europa, still with patches of snow on the slopes.  The road became a feat of engineering – tunnels and viaducts galore, but no room for "aires"!  So we found nowhere to stop for lunch before arriving at Camping el Helguero in Ruiloba, a couple of kilometres from the coast.  It turned out to be a large, pleasant site on several levels, with wooded areas and rock formations as well as level grassy areas.  Having set up, we had lunch sitting outside in the sunshine – bliss!  And as it turned out, it was  warm and sunny for the rest of our holiday.