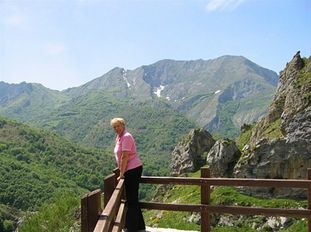 Asturias and Galicia are Spain's most beautiful provinces.  High snow capped mountains with deep gorges and fast flowing crystal clear rivers; lush green alpine meadows with picturesque villages; blue seas with rocky coves and quiet beaches; pretty little fishing ports and underdeveloped resorts.  But, like the west coast of Ireland, it has to get its greenness from somewhere.  Rain.  We have spoken to a number of fellow travellers in this area and they all have the same tale.  It always rains when they come here.  The one couple we met who had had two fine weeks in Galicia said that no one believed them. The problem is a geographical one.  West winds cross the Atlantic, hit the mountains and dump their rain.  North winds cross the Bay of Biscay, hit the mountains and drop their rain. East winds have crossed the plains of France with no mountains to hit, so they save their rain and drop it when they hit the mountains here.  South winds cross the central plain of Spain, where, as we have found, it does not rain, so drop their rain when they hit the mountains here.  When there is no wind the clouds settle on the mountaintops and, yes, drop their rain. We are in Camping Ribadesella, a site with very good facilities, including a covered swimming pool, situated above the pretty little fishing port and resort of Ribadesella.  From our caravan on the terraced site we can see the Picos de Europa. The day we arrived was fine and clear and we could see the nearby foothills, the intermediate range and the far snow capped peaks, just.  This is wonderful, we thought, being able to sit outside in the sun and watch the changing colours on the mountains as the sun moved across the sky.  Within 24 hours the far peaks disappeared, then the intermediate ones disappeared.  Occasionally in the late afternoon the sun has broken through and we can see the mountains. Today it is a struggle to see the other end of the campsite!  It has not been all rain, of course, it just seems that way!  In fact on one day we decided we should go out anyway and drove up the Sella valley.  As soon as we had passed the first range of foothills the sun appeared and the day was glorious.  The Sella is not a long river, but it is spectacular. The road follows the riverbank through alpine meadows and then through amazing gorges, some, like the Desfiladero de los Beyos, narrowing to about 20 feet wide, with cliffs towering above and the river far below. When the gorges open out there are views of the high Picos, at this end up to and over 2,500 metres (8,000 ft), jagged limestone crags with snow in the crevasses. We went as far as the Puerto del Ponton, the head of the pass at 1280m (4,200ft), then drove back down again.  The view going the other way was equally spectacular. We stopped on the way down at a weir where there was a salmon ladder.  We did not see any, but did see loads of fishermen at various points, so there were some there somewhere.  Needless to say as we came to the foothills it became cloudy again! We spent a couple of mornings just wandering around Ribadesella itself.   On one side is a promenade along the riverbank with signs describing the local history, from Stone Age to modern times, followed by signs with all the local mythical creatures.  Both were bilingual, Castilian Spanish and the local language, Bable, yet another version of Spanish.  On the other side of the river is a lovely beach, with a seafront promenade backed by grand residences.   Again there were signs indicating the history of many of these grand houses, a lot of which seemed to have been built by emigrants who returned home having made their fortune in tobacco in Cuba.  What there was none of were "tackeries", the usual seaside shops full of cheap souvenirs, beach gear, ice creams and rock.  It was very genteel and refined, more like a Cannes or Antibes.  However, not so genteel or refined was the six coach loads of school kids on the beach for the annual schools beach volleyball competition! We ate lunch at a sidreria, a sandwich washed down with the local cider. The cider comes in bottles and has to be poured by the waiter at arms length, one hand holding the bottle as high as possible, the other the glass, at knee level.  A most peculiar habit, which did not seem to alter the taste or effervescence of the brew. In Ribadesella are the oddly named Cuevas de Tito Bustillo.  This deep cavern was discovered in 1968 by a group of young cavers and contains some of Spain's most significant Palaeolithic cave paintings, horses and reindeer adorning the walls as if painted yesterday.  The caves themselves were also impressive, great halls, stalactites and stalagmites, and everywhere the sound of rushing water.  Our guide also pointed out small holes in the rock which lead to more caverns where there were even better paintings, not yet accessible to the public.  The state is building a large museum close by which will hold a full size replica of the inaccessible caverns.   As we arrived two coachloads of shrieking Spanish ladies drew up.  We were fortunate to get onto the tour before them.  We passed them on the way back through the cavern and the noise was horrendous. Tomorrow we travel the last 80 miles to Santander, for the ferry to Portsmouth.  It is sad to be finishing such an epic journey, sad too that we are finishing it in the wet.  But in many ways it will be good to get home, to see family and friends, not to mention the cats, catch up with 12 month's post, then start the search for a new home.