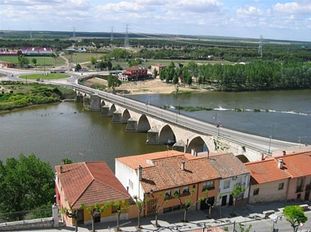 In all we had a very enjoyable week in Tordesillas.  It was a good site, there was  lots to see and do and most importantly we had excellent weather.  It may sound as if we spent the whole time sightseeing, but in fact we spent a lot of time just sitting outside the caravan, soaking up the sun and reading.  As a matter of fact, disaster almost struck, as we were in danger of running out of books. We have topped up our "library" whenever we could, by swapping with other travellers, or visiting charity shops, which are very few and far between.  Many campsites have a shelf or two of books (not always in English, of course) where campers can take a book as long as they supply another one in exchange, and in some sites kind people have left books or magazines in a public place for others to help themselves.  There had been nothing like that for weeks and we were reduced to reading cereal packets.  However in Salamanca we found a bookshop selling English paperbacks, albeit at an extortionate price.  To get our money's worth we bought two weighty classics to keep us going, as well as two lighter novels!  Hopefully they will last us until we get home.  It was sad to move on, but the weather reports for the north coast were promising, and we do want to see the Picos de Europa before we sail home next week.  So we decided to return to the north coast.