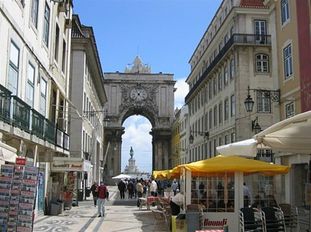 The campsite (Camping Orbitur Evora) was a mile or two outside.  Too far to walk (if the rest of the day was to be spent walking round the town), but too close to be a proper drive.  Needless to say we took the easy option and drove!  However the view towards the city from the campsite was inspiring, with the cathedral perched on top of a hill almost like a Disneyland palace.

The cathedral was built during the 12th & 13th Centuries, starting off as Romanesque and later finished off as Gothic.  There is a large chancel at the rear built in the 18th century, which anywhere else would be attractive but here unfortunately it does not work. At the side of the church are peaceful Gothic cloisters.  From outside the effect looked rather French. Close to the cathedral is a very well preserved 1st century temple of Diana, in a square surrounded by beautiful palaces. The narrow hilly streets and Moorish houses between the palaces give the city a very pleasant feel. In another church is the most amazing chapel.  In order to help his monks meditate on the meaning of life and death the abbot raided the city's graveyards and lined the chapel walls with the bones of 5,000 people.  A rather gruesome experience, particularly as many of the skulls were obviously of children.  Needless to say the hypocritical abbot had his own bones hidden in a stone sarcophagus.  Although the city was founded by the Romans, there is evidence of "civilisation" in the countryside around dating to a far earlier time. There are numerous cromlechs and stone circles amongst the cork oaks. The Almendres site is the largest megalithic site in the Iberian peninsular, and at 7,000 years old, one of the oldest in Europe.  Nearby the Cromlech Anta Grande do Zambujeiro is absolutely huge, with stones that make Stonehenge look like Lego bricks.  April 11 was of course our wedding anniversary (39 years, scarily) and we celebrated with a buffet meal in a nice restaurant in the palace by the Temple of Diana.  And this is where the title of this blog comes in.  I had already realised that the Portuguese were great fish eaters, but believed that the staple was sardines or maybe tuna.  No, they are cod eaters. But not cod as we know it, but cod salted and dried.  We had come across this in Barcelona many years ago as a Catalan delicacy, Bacalau.  Here it is more common than bacon and eggs in the UK.  The supermarkets have piles of it, long racks and shelves with these pieces of what look like dried white cardboard.  Customers select their piece and take it to the fish counter where it is cut to size with a guillotine or an electric saw, much as in the UK you would take your piece of timber or melamine to the B&Q timber-cutting department.  People buy huge bags of it.  There are even pre-packs at the checkouts, on display with the chewing gum and chocolate.  There are at least 5,000 ways of cooking it, all of which involve pre-soaking for a number of months then boiling for a year or more (or at least that is what it tastes like).  Lesley tried a couple of these dishes on our meal out and declared them delicious.  I did not try it, other than a mouthful of Lesley's.  To me cod should be fresh, dusted with flour and lightly fried, or better still deep fried in batter and served in newspaper.  How anyone can eat and enjoy a piece of cod that is salted and dried is beyond my understanding. While we were at Evora the weather broke.  We have moved far enough north now and are close enough to the Atlantic to be getting the Northern European spring weather, i.e. cold winds and steady rain.  We packed up in the rain and moved west to Lisbon.  To reach Lisbon involves crossing the Tagus, either by the beautiful 25th April Suspension bridge , a mile high traffic jam, or by the 11 mile long Vasco Da Gama bridge.  We chose the latter.  As we crossed it the heavens opened and the rain was so heavy I could not see the end of the bonnet.  To add to the problems a car had spun in the rain and was blocking the fast lane.  What should have been a picturesque approach to Lisbon was a nightmare.  The Michelin guide describes this bridge as "having the illusion of balancing on the Tagus".  On this day it had more of an illusion of being under it!  Miraculously the rain stopped at the other side and we were able to sit in the sun at the campsite.  Little did we know that that would be the last time we would see the sun, or even dry air, for the rest of our stay in Lisbon! I had been looking forward to Lisbon, having seen and read so much about it.  I must confess I was rather disappointed.  I suppose the weather did not help, and the campsite (Parque Municipal de Campismo de Monsanto) was not exactly the best we've stayed in. There were some interesting sights, but the overall impression was of a city down on its luck, rather sad, depressed and a bit tatty.  The Praca do Commercio, which was once the main square in Lisbon, surrounded by Royal Palaces and now surrounded by government buildings, was once regarded as one of the great squares in Europe. Today, with the centre of it dug up and surrounded by hoardings, with the arcades around three sides filled with a cardboard city of the homeless, with a continual traffic jam along the fourth side, it was downright depressing.

A superb archway leads from the square into the main pedestrianised business and shopping area, but the wonderful Pombaline architecture of these streets was showing wear and tear, with rotting window frames and peeling paint.  On street corners were gangs of youths, most perfectly innocuous, but some with evil intent.  Twice Lesley felt the zip of her backpack being opened as she was jostled in the crowd.  On other occasions local people warned us of the perils, and we even had a tram stop beside us and the driver call out to be careful, as he had just spotted a particular gang.  Where were the police?  Who knows?  Frankly it was like being back in some of the run down capitals of Eastern Europe! However, one delight of Lisbon is the public transport system.  It was an easy bus journey from the campsite into the centre, then an excellent inner city network of trams, some modern like Sheffield or Manchester, but many lovely little antique ones, most of which were actually built in Sheffield. In many capital cities we have visited we have first done the tourist thing and taken an open top bus tour to get our bearings and help decide where to spend time and where to avoid.  Here, because of the weather, that was out of the question.  So we had a two-hour tour in an antique red tram.  Lisbon is a city of hills, and the way the tram climbed up and down these hills with occasional glimpses of the huge suspension bridge we might have been in San Francisco! The wet weather meant that much of our sightseeing was indoors or through wet glasses.  The Chiado Museum, set in the remains of a 13th Century abbey, is an architectural masterpiece, with its few exhibits shown to their best advantage.  Most of the display was devoted to an exhibition of Romanian Avant-Guard Art, quite apt given the state of the city!  The Museu Nacional de Arte Antiga was set in a converted palace, again a masterpiece of interior design.  Here were works by a number of famous masters, including a superb Hieronymus Bosch, but perhaps of greater note were the number of works by "an unknown master".  It must be the largest collection of works by "unknown master" in Europe, if not the world. At the western end of the city is the site of Belem (Portuguese for Bethlehem), the little harbour whence the likes of Vasco Da Gama and Magellan set sail on their epic journeys.  The site is commemorated by the Padrao dos Descobrimentos, a huge monument to the explorers of old, almost communistic in its style.  Just down river is the Torre de Belem, the 16th century tower built in the middle of the river to defend the port.  The earthquake of 1755 altered the course of the river and left the tower high and dry! The architecture is a glorious combination of Romanesque, Gothic, Moorish, Venetian and Manueline. Inland from these two lies the monastery of Jeronimo, another amazing 16th century structure.  Needless to say we saw all these in pouring rain, getting absolutely soaked! The next day we visited the town of Sintra, some 20 km west of Lisbon, where the king and his court  had their summer residence. This is a fairytale town,  built on the slopes of a hill with a huge Moorish castle at the top. Most of the buildings are palaces, in various states of repair. We visited the Royal Palace, and wandered the streets briefly between showers. Another 20km west brought us to Cabo da Roca, the most westerly point of mainland Europe. Here the cliffs fall 400ft to the sea and Atlantic waves crash on the rocks below. It was very much like Pembroke, or the west of Ireland, but for the fact that there were a dozen coaches parked there!  Further south is the resort of Cascais, a very pleasant, quite up-market place with nice beaches and unusual cliff formations, including the Boca de Inferno, a cave (now collapsed) and waterspout once frequented by the notorious satanist Alistair Crowley.  I am sure that if the weather had been kinder and the campsite better we could have spent more time in Lisbon and the surrounding area, but after four days felt it was time to move on.